From March 12th to 23rd world leaders, ministerial delegations and civil society representatives attended the 62nd session of the Commission on the Status of Women (CSW) at the United Nations (UN) in New York. CSW is the UN’s largest multilateral meeting on women’s rights and gender justice with over 8,000 non-government organizations and hundreds of government representatives traveling to New York to participate each year. This year’s CSW theme focused on challenges and opportunities in achieving gender equality and the empowerment of women and girls living in rural areas.

OutRight’s delegation included members of New York based staff, staff from the Caribbean and Asia Programs, and for the first time, three OutRight UN Religious Fellows from Africa and the Caribbean. 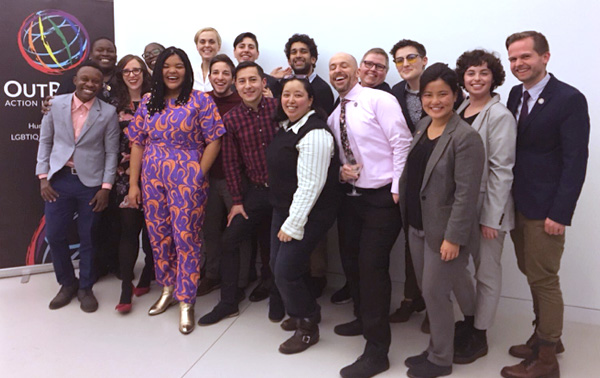 As an ECOSOC-accredited organization headquartered in New York, the CSW is a central part of OutRight’s work at UN Headquarters. It is an opportunity to hold the UN system to account on its commitments to civil society participation, raise the visibility of the human rights of LBTI women and people, advocate for expansion and inclusive approaches to gender, and stand ground against homophobic and transphobic right-wing opposition.

This year we came out in numbers! LGBTIQ international civil society were visible across the CSW program and events and we got the best language in the Agreed Conclusion text we’ve gotten in years and here’s how we got there...

This year OutRight significantly increased its engagement in the multilateral negotiations for the CSW outcome text, known as the Agreed Conclusions. Our work on this commenced in back in September 2017 in the lead-up to the UN Women Experts meeting in Rome and ended at the formal adoption of the text on the last day of the CSW. The final text included the strongest content on civil society participation, women human rights defenders, intersectionality, diversity, violence, and family to date. 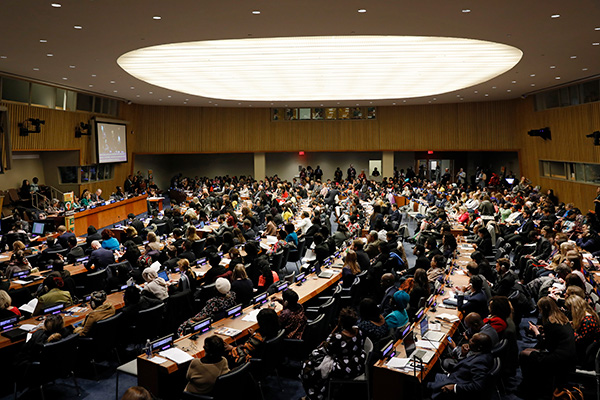 Below are a few key highlights:

The need to address multiple and intersecting forms of discrimination was articulated across the document, including a recognition of diversity of women and girls in relation to discrimination for the first time ever.

Violence remains the key priority for LGBTI human rights advocacy at the UN. The CSW62 text explicitly addressed the role that that discriminatory laws and policies, gender based violence and harassment, negative social norms and gender stereotypes can play in preventing the achievement of gender equality and the empowerment of all women and girls.

Restrictive definitions of “the family” weaken the international human rights legal framework by deliberately invisibilizing the violence and discrimination experienced by individuals within families. Historically the broad anti-human rights ‘traditional families’ agenda led by conservative States and fundamentalist civil society groups as been used as strategy to limit definitions of family to exclude diverse families. Many diverse forms of the family exist outside of the nuclear family construct in rural areas including multi-generational families, female-headed households, migrant families, and families with caring responsibilities for relatives. Building on the substantial progress made on language around families in the CSW61 Agreed Conclusions, attempts at restricting reference to family in CSW62 were again defeated. Importantly, new language acknowledging the changing needs of families and articulating the human rights of individuals in families was included. 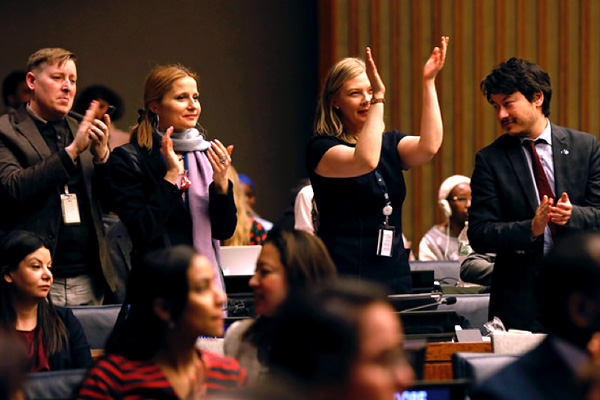 We again continued our co-leadership of the CSW LBTI Caucus and this year became the first LGBTIQ organization to join the leadership team of the Women’s Rights Caucus (WRC). Across both, we facilitated space for international LGBTIQ representation. In our role in the LBTI Caucus we worked with partners to convene preparatory meetings with activists and non-government organizations ahead of their arrival in New York. As a member of the WRC leadership team, we worked to ensure that LGBTIQ concerns were woven into its overall strategy, providing capacity training for WRC members and working within the intersectionality of issues tackled by the WRC. 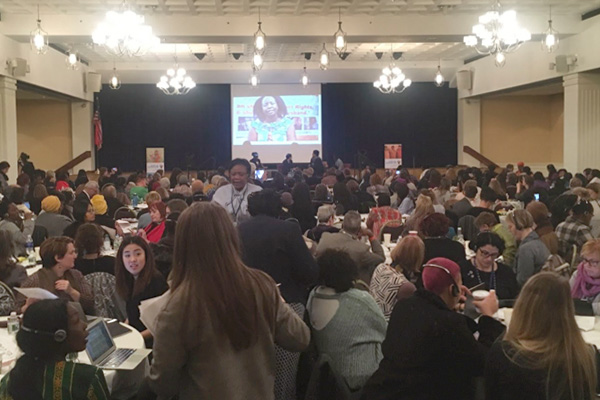 For the first time this year, we created civil society toolkits for the CSW. The ‘CSO CSW Primer’ provides a general overview of the CSW and the way in which activists can be effective in the space. The ‘Agreed Conclusions Explained’ explains the process around the Agreed Conclusions, the main outcome document of CSW, with a specific timeline as well as entry points for activists to become involved. 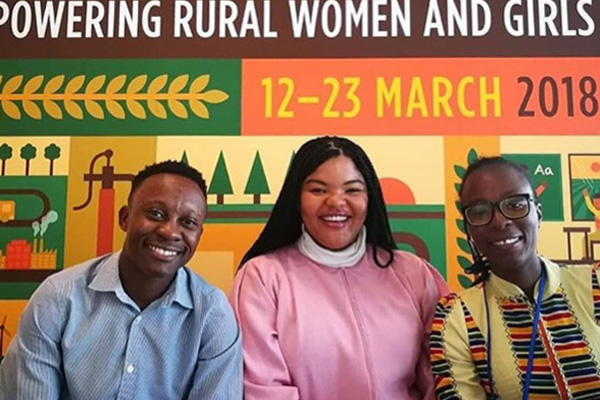 For the first time this year, with support from the Horizons Foundation, we recruited three activists to engage in a year-long Religion UN Fellowship Program. These three advocates were selected from an extraordinary pool of more than 565. The three advocates are Xeenarh Mohammed, ReSista Camp, Nigeria, Kim Windvogel, FEMMEPROJECTS NPC, South Africa, and Neish McLean, TransWave Jamaica, Jamaica.

The fellowship is designed to support existing national work for LGBTIQ rights. We focused our fellowship on supporting activists from Africa and the Caribbean, two regions that have been severely impacted by religiously-motivated violence and discrimination. The Fellowship aims to bolster meaningful Global South participation in international advocacy and invest in local movement-building and leadership development. Get to know the OutRight Fellows, their expectations, experiences, and engagement over the two weeks by watching this short video.

Neish McLean, Kim Windvogel, and Xeenarh Mohammed, OutRight UN Fellows, chat about their advocacy work at the 62nd Commission on the Status of Women at the United Nations.

Holding space and raising visibility is a central part of our work at the CSW. Both symbolically and substantively ensuring that the lives, experiences and challenges of LGBTIQ people are part of the dialogue is a vital act of resistance. Thanks to strong organizing by LGBTIQ organizations globally, LGBTIQ rights were well-represented at the CSW this year, primarily in side events. Below, OutRight provides an overview of some of the events we were most involved with as speakers, organizers, and/or co-sponsors.

UN Women Leaving No One Behind

In another first this year, we partnered with UN Women on its flagship event for CSW62. The event, Leaving No One Behind for Planet 50/50 by 2030: Every Rural Woman and Girl Everywhere, took place on Thursday, March 15th and included a number of panels and interactive sessions that discussed issues women and girls from rural areas are facing. Two of OutRight’s Religion UN Fellows, Neish McLean and Kim Windvogel, spoke on a panel about issues facing the LGBTI communities in Jamaica and South Africa. This was the first time LGBTI issues were included in the formal UN Women CSW program. 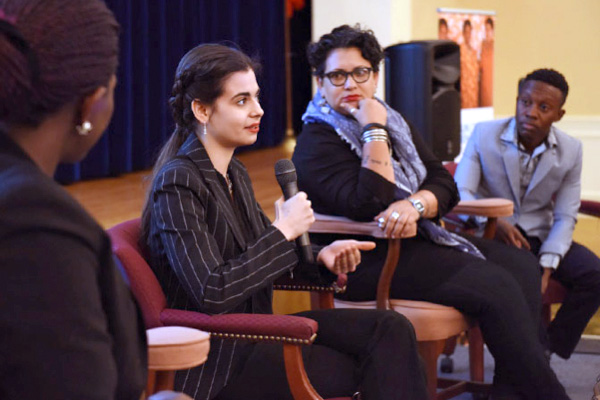 UN Fellow Neish McLean (far right) on panel at the UN Women Leaving No One Behind side event. (Photo: UN Women/Susan Markisz) 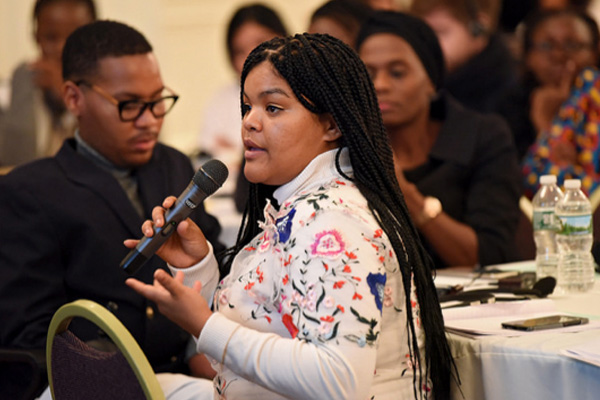 UN Fellow Kim Windvogel speaking at the UN Women Leaving No One Behind side event. (Photo: UN Women/Susan Markisz) 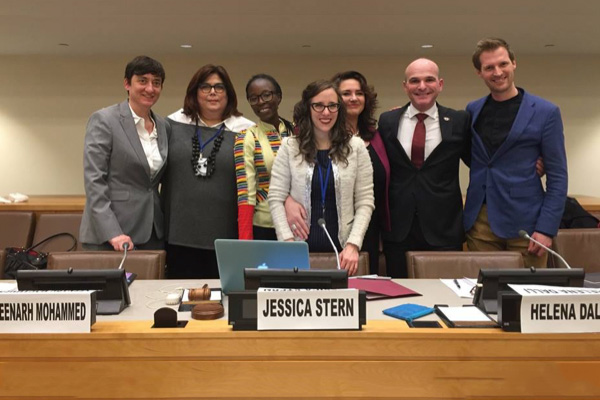 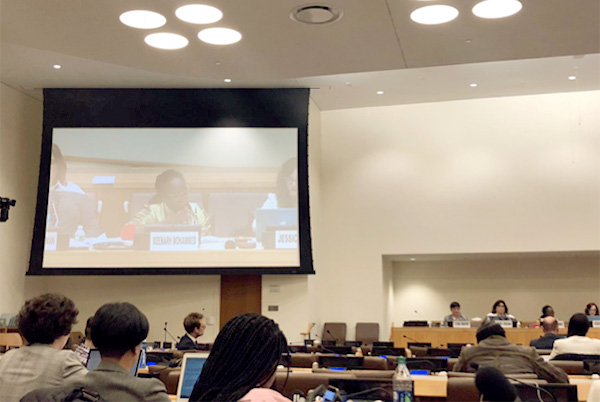 Defending the Right to Life: Killing of Women and LGBTIQ People in Conflict 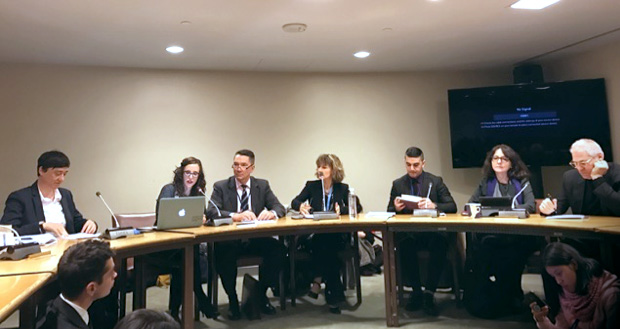 On March 19th, OutRight partnered on a CSW panel exploring the targeting of women and LGBTI people in conflict. OutRight Executive Director Jessica Stern acted as moderator to a panel consisting of activists, academics, and experts whose statements reflected powerful testimony on the issues around women and LGBTIQ persons in conflict areas globally with experiences from Colombia and Iraq explored as examples. The key messages highlighted the importance of gathering data of gender crimes, the influence that national institutions have on community actions, and how to enact the critical component of accountability. Speakers included, His Excellency Jouni Laaksonen Deputy Permanent Representative of the Finnish Mission to the UN, Agnès Callamard, UN Special Rapporteur on extrajudicial, summary or arbitrary executions, Amir Ashour, IraQueer, Dubravka Simonovic, UN Special Rapporteur on violence against women, Andras Vamos-Goldman, Justice Rapid Response, and Charo Mina-Rojas, Proceso de Comunidades Negras, Colombia. 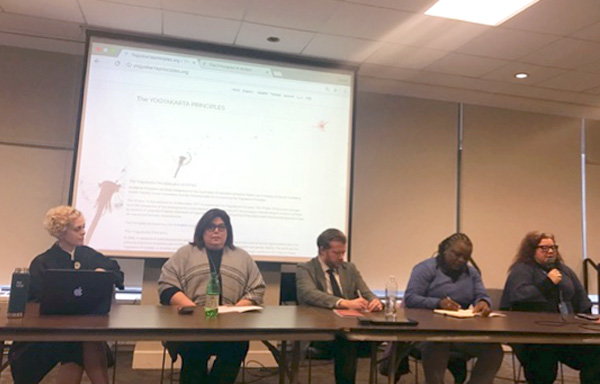 The CSW Town Hall Meeting with the UN Secretary General 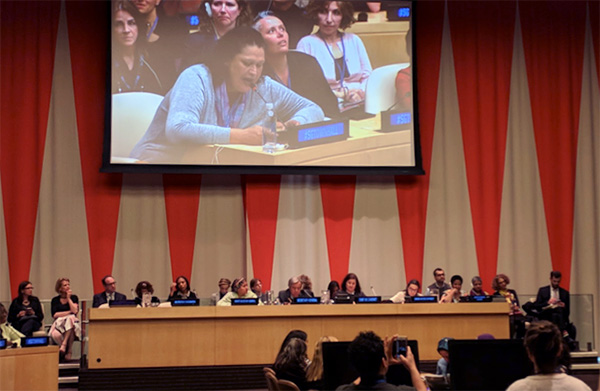 On March 13th, the LBTI Caucus attended the second annual CSW Town Hall Meeting between the UN Secretary-General António Guterres and civil society. The Caucus worked in the lead up to formulate a question for the Secretary-General asking how LBTI people will be included in the 2030 agenda. The Secretary-General acknowledged the ‘difficult situation’ for LGBTI people in many countries, including both discrimination and ‘abhorrent and unacceptable’ penal mechanisms. Guterres noted that non-discrimination is an essential part of the UN Secretariat, and that the human rights instruments of the UN are the first line in denouncing harmful policies and practices. The Secretary-General committed that he himself “will be as much involved as possible”. 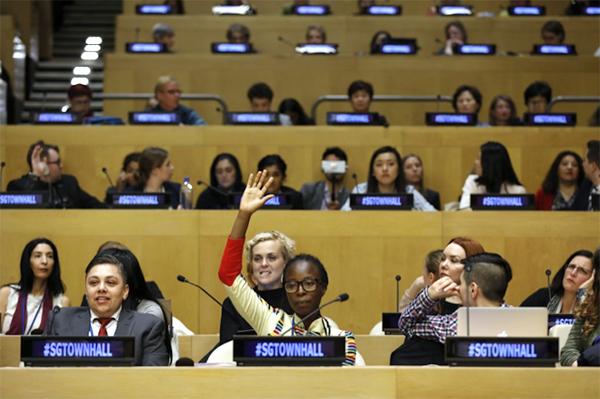 OutRight’s UN Fellow, Xeenarh Mohammed, raising her hand to ask a question on behalf of the Women’s Rights Caucus at the Town Hall. (Photo: UN Women)

In addition to these events, Jean Chong, program coordinator from OutRight’s Asia Program spoke on four vibrant panels, including: ‘LBT Women’s Movement-Building in the Global South’, ‘Women’s Human Rights Advocacy in a Time of Backlash’, ‘LGBT Rights in Southeast Asia’, and ‘Is LGBT Rights a Delusion in Southeast and East Asia?’