The past few months have been busy ones for OutRight’s UN Program. We started the season on May 17 with our second annual event at UN headquarters to mark International Day Against Homophobia, Transphobia, and Biphobia (IDAHOTB) with the UN LGBTI Core Group. Building on this momentum we delivered our second annual UN LGBTI Core Group Retreat and Ambassadors Dinner from June 27-29. Last week we closed the season with our Religion UN Fellows for advocacy at the annual High Level Political Forum on Sustainable Development from July 9-18.

In this edition we explore the success of these exciting events and look ahead to the upcoming events that will take place at the UN over fall and winter 2018. 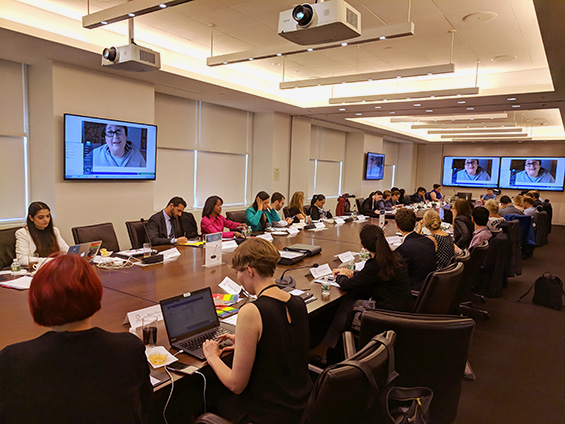 The objective of the LGBTI Core Group is to work within the New York-based UN system to raise awareness about LGBTI issues; contribute to multilateral work and negotiations; and seek common ground and engage in a spirit of open, respectful and constructive dialogue and cooperation with UN Member States and other stakeholders outside the Core Group.

The Retreat began on June 27 with an Ambassador's Dinner's and brought together over 40 guests representing 23 countries as well as the Office of the High Commissioner for Human Rights. This year, the UN LGBTI Core Group agreed to open up the first day of the program to other like-minded countries and potential allies which resulted in attendance by a total of 35 UN Member States. This first day of the retreat included expert LGBTI panelists on topics such as intersex rights; gender identity and expression; and women, peace, and security. The second day of the retreat focused on the UN LGBTI Core Group members formulating the second annual 12-month work plan. Both the dinner and the retreat reinforced the UN LGBTI Core Group’s commitment to promoting LGBTI human rights, peace and security, and sustainable development in agreed steps for action in the next 12 months at the United Nations headquarters in New York. 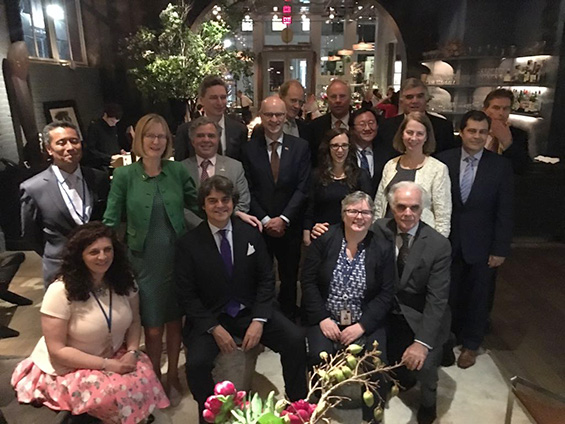 Overview of the HLPF 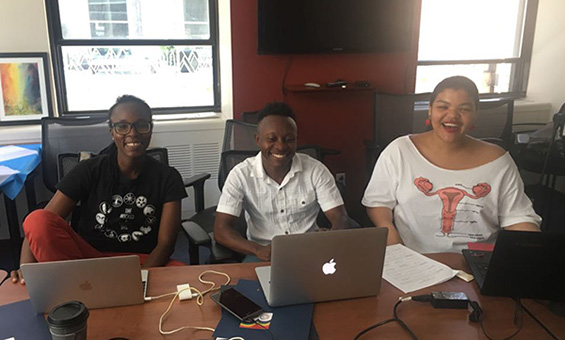 The High-Level Political Forum (HLPF) is a major event at the UN each year in which Member States come together at UN headquarters to review global progress toward reaching the Sustainable Development Goals (SDGs) of the 2030 Agenda. The HLPF operates both as an opportunity for diverse societies to reach consensus on major themes in the state of the world, and as a platform for individual nations to highlight their own strengths and weaknesses in Voluntary National Reviews (VNRs). At the end of the HLPF, a Ministerial Declaration is agreed upon which summarizes the beliefs and commitments of the UN Member States to sustainable development in the coming year.

This year was the third occurrence of the HLPF since the 2030 Agenda was passed in 2015 and the second round of VNRs. This year’s theme was “transformation towards sustainable and resilient societies.” There were six SDGs under review:

OutRight and other LGBTIQ partners at the HLPF focused on SDG 11 as an opportunity to create dialogue around the experiences of LGBTI people in cities. In order to leave no one behind in SDG 11, cities must be truly inclusive and safe for all, regardless of sexual orientation, gender identity and expression, and sex characteristics (SOGIESC). Issues like LGBTIQ homelessness, vulnerability to all forms of violence, and lack of access to services must be brought to the forefront of conversations around sustainable cities.

Read OutRight’s analysis about the importance of the inclusion of LGBTI people in safe cities here. 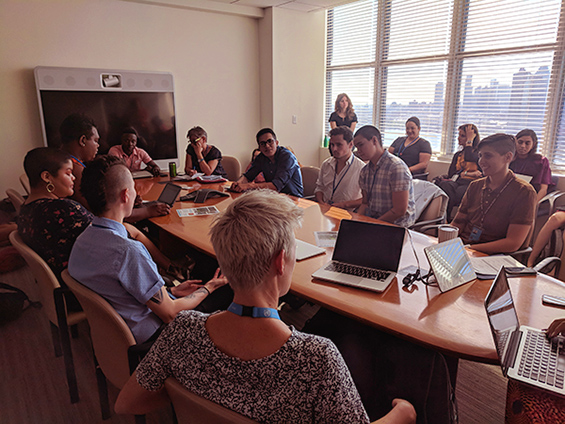 OutRight is currently co-leading a process with RFSL and COC Netherlands to formalize an LGBTI Stakeholder Group. Being recognized as an official stakeholder group will allow for formal interventions and engagement as an LGBTI constituency during intergovernmental processes processes at the UN.

For a review of the basic format and history of the HLPF, view OutRight’s HLPF Primer here. 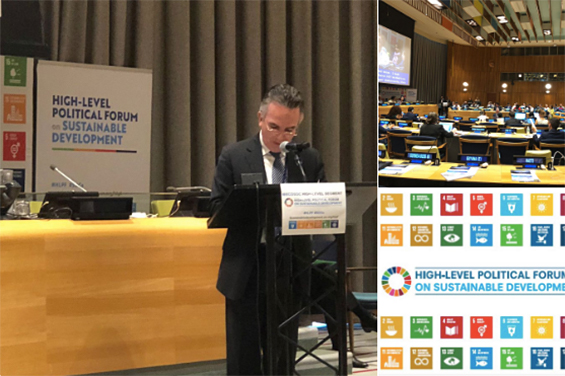 Argentinian Mission to the UN Tweeted this picture showing the Multilateral Affairs Vice Minister of Mexico delivering the UN LGBTI Core Group Statement at the HLPF.

OutRight’s UN Program worked with the LGBTI Core Group to deliver its first statement as a group at the HLPF during the High Level Segment General Debate on July 16 discussing how issues facing the LGBTI community must be addressed to assure that the commitment to leaving no one behind is truly achieved. An excerpt of the full statement read by Miguel Ruiz-Cabanas, Multilateral Affairs Vice Minister of Mexico on behalf of the UN LGBTI Core Group representative reads:

An unacceptable number of LGBTI persons in the world lives in poverty and shares with the rest of the world’s poor an urgent need for achieving sustainable development. Stereotypes often result in violence and inhumane treatment. Discrimination and stigma impose restrictions to housing, employment, education, health care and other basic social services. If we truly aim to create a society where no one is left behind, governments and the private sector should offer LGBTI persons support and opportunities, without discrimination and without violence of any kind, in full respect of their human dignity and rights...

In order to fully achieve the Agenda 2030 and its 17 Sustainable Development Goals we must tackle these challenges. In that regard, we hope the HLPF discussion will contribute to highlight the importance of moving from an abstract concept of "leaving no on behind" to outlining and implementing national policies based on full inclusion, especially for LGBTI persons across the globe, in order to give full meaning and achieve all the noble sustainable development goals. 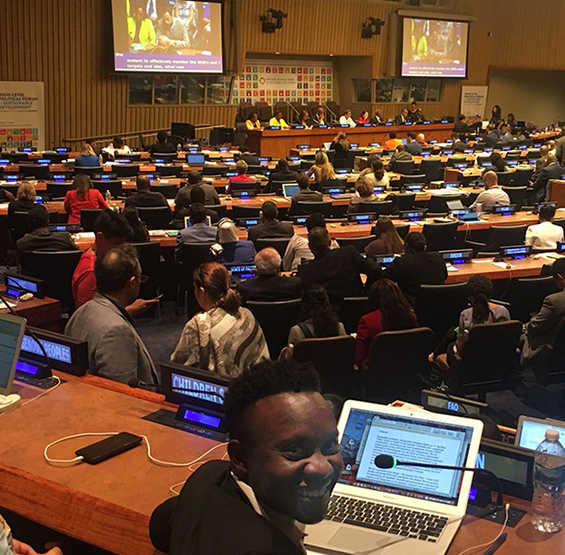 Neish McLean getting ready to give the intervention at the VNR of Jamaica. (Photo credit: Siri May)

In response to Jamaica’s VNR, OutRight’s Caribbean Program Officer and co-founder of TransWave Jamaica, Neish McLean, made an intervention on behalf of the Major Groups and Other Stakeholders. From the Women’s Major Group seat, he urged the Jamaican delegation to see the strength and resilience of marginalized communities in Jamaica, saying:

In the implementation of Agenda 2030, we seek to secure the recognition for community-led action in order to ensure Jamaica’s transformation towards sustainability and resilience. By nature, vulnerable and marginalized people are resilient – grassroots women, LGBTI people, young people, people living with disabilities are resilient – and as a community and people invested in realizing Vision 2030, we invite the Jamaican government to meaningfully engage us in realizing a sustainable nation.

The HLPF Ministerial Declaration is the main outcome document for the HLPF. The document is negotiated by all 193 Member States of the United Nations and builds on the Political Declaration of ’Transforming our World: the 2030 Agenda for Sustainable Development’ adopted in September 2015. The negotiations are conducted at UN Headquarters in New York on behalf of Member States by delegates from the 2nd Committee of the General Assembly and begin three weeks prior to the HLPF.

Since 2015, the Ministerial Declaration has been adopted by consensus, however this year the Declaration was called to a vote for the first time due to objections by the United States, Israel, Turkey, and Russia. The objections were made over language on foreign occupation, gender equality, children’s rights, transboundary water cooperation, and means of implementation. All five contested paragraphs passed by majority vote. The Declaration as a whole also passed with no abstentions and only two dissenting votes (the United States and Israel). This outcome whilst unusual for the HLPF is part of a growing trend in multilateral negotiations more broadly. Next year's HLPF Ministerial Declaration will be an interesting one to watch and may give us more insight into the direction of these trends.

For OutRight’s in-depth analysis on the process to reaching this years Ministerial Declaration please click here. 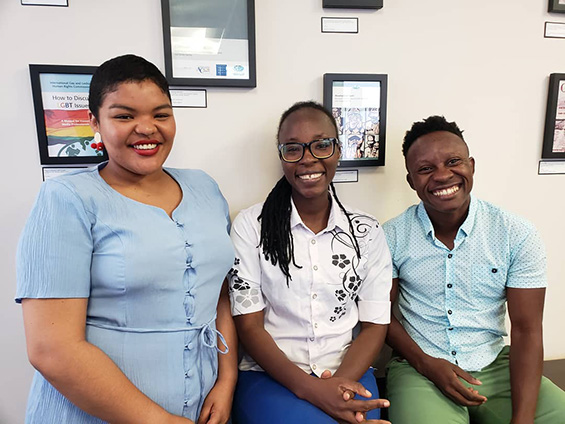 The HLPF marks the second major UN advocacy event for the OutRight Religion UN Fellows. At the end of HLPF, OutRight’s UN Fellows sat together and reflected on their experiences from the past two weeks in a recorded interview.

Being able to create the actual message and contribute to the content of that was pretty significant, and that’s something I can now take back and do some activism around and be more involved in the process. So being in the space and having the language – you don’t always get a chance to create an impact in that sort of a way. The [UN] space is not very accessible to civil society and NGOs in general. But even though the space is shrinking I think we had the great opportunity to play our role in small ways. I think that’s pretty great.

Xeenarh Mohammed said of one of the highlights of their time at the HLPF:

Something that I will take back with me was the action that was taken by the Women’s Major Group and other activists in front of the UN to protest the killings that are going on in Colombia. I think that was such a strong and important point that needed to be made, especially now that we are talking about peace, but it only remains in words not in actions, so it was important to see those who are most affected by this violence to stand up and say ‘enough.’

In comparing their experiences at CSW and HLPF, Kim Windvogel stated:

This time around... I felt like I could manage my time. It felt like I had more space to move and I knew what I wanted out of it... I think last time my strategy and my advocacy wasn’t as focused as I made it this time. So the growth for me was very very important.

For more on the HLPF See these other resources:

In Quezon City, Philippines, OutRight Action International partnered with EnGendeRights and the Office of the Vice Mayor of Quezon City to ensure that lesbian, gay, bisexual, transgender, and intersex (LGBTI) persons are not only recipients of services provided by the city but are also partners in creating an inclusive city where everyone is an active player in development.

Xeenarh Mohammad, one of OutRight’s Religion UN Program Fellows, had the opportunity to sit down for a panel discussion during the HLPF to speak on “Rethinking the Urban Environment” in the SDG Live Media Zone.

III. May 17th, IDAHOTB Event at the UN 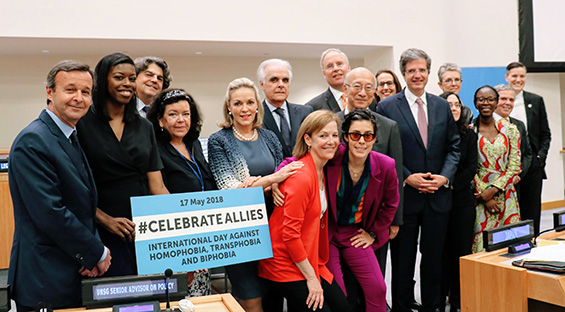 In commemoration of the 2018 International Day Against Homophobia, Transphobia, and Biphobia (IDAHOTB), as part of the UN LGBTI Core Group, OutRight co-organized an event at UN headquarters in New York. Moderated by Argentinian Ambassador Martin Garcia Moritan, more than 200 people gathered to hear featured remarks by H.E. Ms. Karen Pierce, Ambassador of the United Kingdom to the UN, H.E. Ms. Besiana Kadare, Ambassador of Albania to the UN and others. A moderated panel discussion with community members from the sectors of sports, culture, and business and civil society followed. The event had a mix of LGBTIQ people and allies, including French Olympian Casey Legler; Beth Brooke-Marciniak, Global Vice Chair of Public Policy for EY; and OutRight Religion UN Fellow Xeenarh Mohammed, founder of ReSista Camp in Nigeria. This event aimed to raise awareness at the United Nations and more widely about the ways in which LGBTI individuals and allies in various industries have joined together to raise awareness, acceptance, and promote and protect the human rights of LGBTI community members.