The OutRight United Nations Program would like to thank all of our partners for a tremendous 2018!

Thanks to our collaboration with OutRight’s UN Religion Fellows, over the course of the year, OutRight’s UN Program celebrated major advances at the Commission of the Status of Women, we held a historic UN LGBTI Core Group event to honour the International Day Against Homophobia and Transphobia, hosted a historic second UN LGBTI Core Group retreat, contributed to Voluntary National Reviews at the High Level Political Forum on the Sustainable Development Goals, and led historic initiatives at the UN General Assembly. We expanded our work into new areas such as Women Peace and Security and the UN General Assembly Sixth Committee, and we continued our work with LGBTI and allied civil society internationally. We ended 2018 with OutRight’s annual UN Advocacy Week followed by our annual conference, OutSummit.

This UN New Yorker edition focuses on OutRight’s UN Advocacy Week and provides updates on the second half of the UN General Assembly Session. 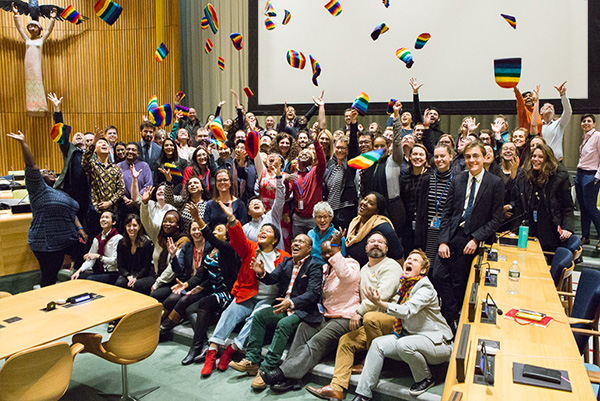 I. The UN General Assembly Third Committee and Extrajudicial, Summary and Arbitrary Executions

In the previous edition of the UN New Yorker, OutRight’s UN Program explained one of the major resolutions involving sexually orientation and gender identity at the UN. The Resolution on Extrajudicial, Summary and Arbitrary Executions (EJEs) is the only resolution at the UN General Assembly that includes explicit reference to sexual orientation and gender identity (SOGI). After months of outreach and advocacy, the EJE resolution was presented to the Third Committee of the General Assembly on November 19-20, and we’re pleased to report that the outcome of the vote was extremely positive with a number of significant results!

As has been the case in previous cycles of the resolution, an attempt to remove the paragraph that includes SOGI was made by the Organization of Islamic Cooperation (OIC). Alongside SOGI, this paragraph also notes other groups that are particularly vulnerable to extrajudicial violence and killings including refugees, indigenous people, migrants racial, ethnic and linguistic minorities, people living under foreign occupation, human rights defenders, journalists and lawyers.

For the first time this session, several UN member States publicly broke ranks with the OIC on the amendment through a procedural clarification. The OIC amendment was retracted and then reintroduced as an amendment tabled by a number of individual UN member States rather than as the OIC group. This distinction is important as it counters the narrative that there is a regional consensus against these vulnerable groups. The result of the vote called against this amendment was 86 against, 50 in favor, and 25 abstentions, resulting in the retention of the paragraph including language on SOGI and other vulnerable groups. These results revealed a loss of ten votes supporting the historically OIC amendment and a gain of two votes in support of SOGI and other vulnerable groups. The resolution in full was then voted and passed with 110 in favor, 0 Against, and 67 Abstentions. 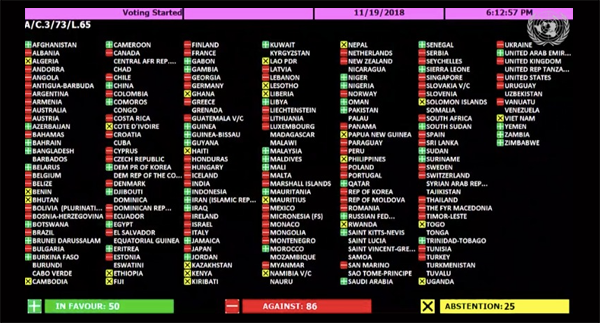 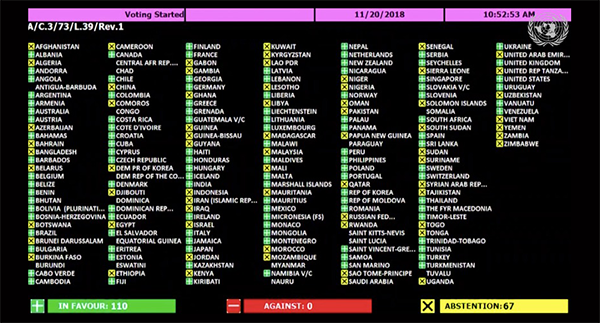 Final Vote on the EJE Resolution in full in the Third Committee. (Photo credit: UN WebTV)

On December 17th the Resolution came before the full General Assembly and resulted in the following vote:

This is a significant change since the last session when the resolution was considered. We increased numbers in support of the full resolution while also seeing a drop in support for the amendment that attempted to remove SOGI. Considering this resolution is about the most fundamental human rights – the right to life and due process – this is an important victory.

OutRight has continued its intensive work on the new draft Crimes Against Humanity (CAH) convention, which is pending with the International Law Commission (ILC) at its final draft stage. While the current draft embraces strong language from the 1998 Rome Statute, including gender as a protected class from persecution, it also adopts an outdated and opaque definition of gender. Before the ILC called for states, international organizations, and others to submit their final commentaries by December 1, 2018, civil society was largely disengaged from this high stakes process.

After participating in a series of expert meetings and consultation on the proposed treaty earlier this year, OutRight launched a major campaign in September. Working with partners from Madre, CUNY School of Law, and Universidad de los Andes, OutRight made a presentation to over 20 UN member State representatives working in the 6th Committee of the UN General Assembly. Participants discussed the proposed sex and gender categories of persecution under the draft treaty and how states could make their own commentaries to the ILC. 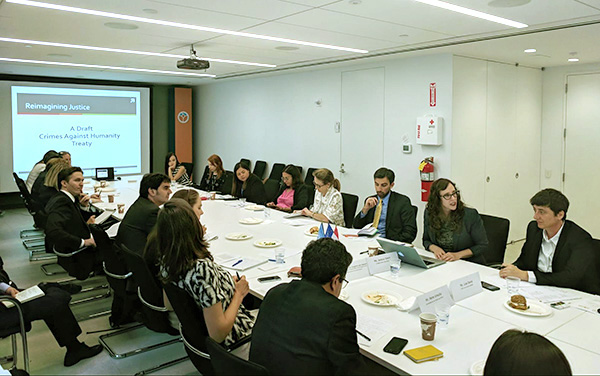 On October 26, in partnership with MADRE and CUNY School of Law, OutRight hosted a day-long international civil society convening to discuss the progress of the draft and strategies moving forward. Over 30 LGBTIQ rights experts discussed the gender-related provisions in the draft treaty and how they could be strengthened to protect the LGBTIQ community. After discussing various approaches and how each activist could participate, participants reconvened to deliberate on collaborative next steps. 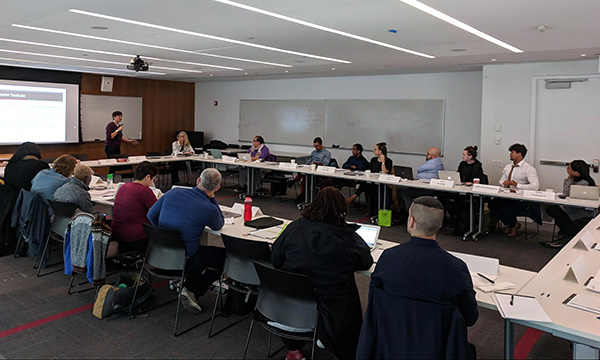 In response to the meeting, human rights, women’s rights and LGBTIQ organizations began mobilizing. By December 1, at least 9 civil society submissions and an open letter initiated by OutRight and Madre with 600 organizational signatures from 103 countries around the world were submitted to the ILC.

Alongside the civil society push, OutRight supported UN member States to submit comments by the deadline. OutRight and partner organizations engaged at least 30 states which resulted in over 16 state submissions to the ILC on the definition of gender. To learn more about the Crimes Against Humanity Treaty and how to stay involved, see the Toolkit for Advocates created by OutRight, MADRE, and CUNY School of Law.

On December 6th, the UN LGBTI Core Group held an Advocacy Week event in the Trusteeship Council of UN Headquarters to welcome two new members into the core group. Canada and Ecuador became the 25th and 26th members of the UN LGBTI Core Group, continuing to expand the commitment of UN Member States to LGBTI human rights at the UN in New York. The co-chairs of the Core Group, the Netherlands and Argentina, welcomed Canada and Ecuador with an official acceptance letter and ceremony. Deputy Permanent Representative Louise Blais of Canada and Deputy Permanent Representative Helena del Carmen Yánez Loza delivered remarks to 50 activists from around the globe who were there to witness the historic moment. 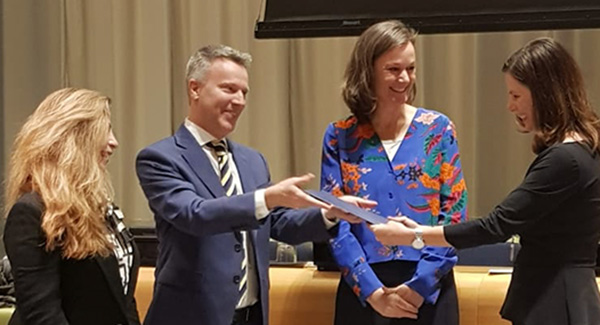 On December 13th, the UN Team partnered with the Permanent Missions of Costa Rica, El Salvador and Spain for an event in UN headquarters exploring the circumstances of LGBTI people in Northern Central America. Moderated by OutRight’s Executive Director, Jessica Stern, the event featured Agustín Santos (Ambassador of Spain), Ruben Escalante Hasbun (Ambassadors of El Salvador to the UN), and Rodrigo A. Carazo (Ambassador of Costa Rica to the UN), and representatives from the UN High Commissioner for Refugees and the Spanish agency of international cooperation. The event profiled the violence and discrimination against LGBTI people on the basis of their real or perceived SOGIESC and the way in which these experiences impacts their right to claim asylum. The event also provided a number of key recommendations regarding best practises and potential solutions. 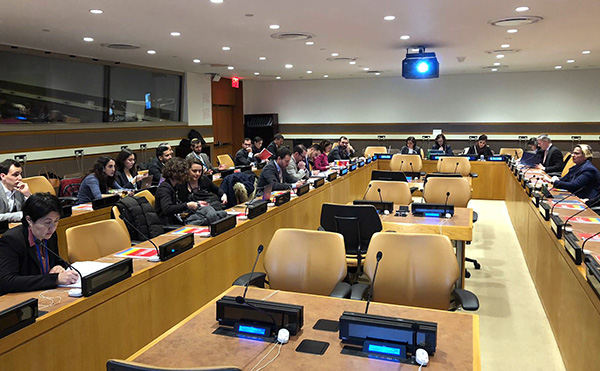 The flagship program of the OutRight calendar is our annual UN Advocacy Week. Since 2011, OutRight has hosted LGBTI activists and human rights defenders from around the world in New York for a week of meetings with UN member State missions to the UN, UN agencies and civil society organizations engaging at the UN. This year, OutRight received over 890 applications from every region of the world. This year’s participants included 42 activists from 34 countries.

This year, the program spanned from November 28th to December 8th beginning with trainings on safety and security and an orientation into UN advocacy followed by five days of advocacy meetings with government officials, UN agency representatives and civil society organizations. 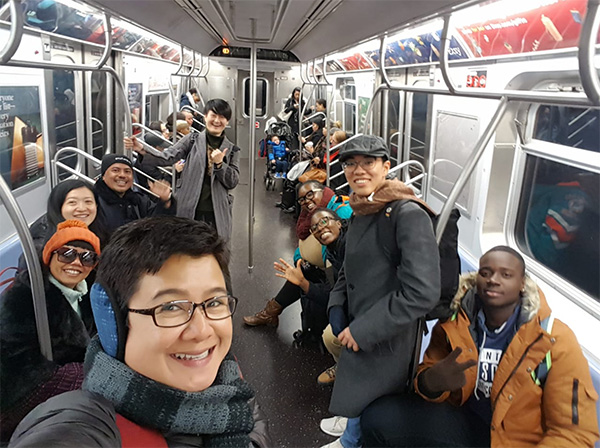 Over the week, OutRight’s UN Program organized meetings with over 55 UN member States missions, UN agencies and New York-based civil society. These meetings provided activists with the space to speak directly to governments around their national and international concerns, particularly in the light of recent global trends regressing on the protection and promotion of human rights. Activists met with Ambassadors and UN officials from all regions of the world including from UN member States such as South Africa, Brazil, Australia, the Netherlands, Fiji, New Zealand, the United Kingdom, Samoa, France, the Philippines, Argentina. 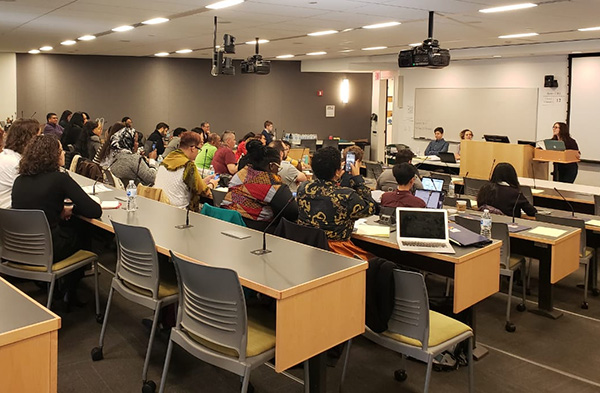 OutRight asked participants about their experiences over Advocacy Week, and they shared the following thoughts: 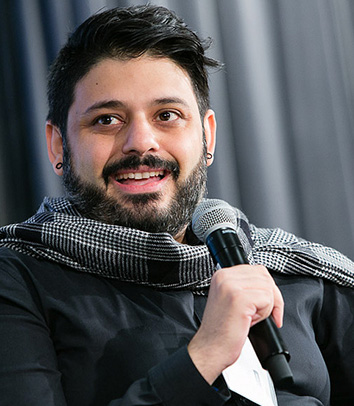 Tarek Zeidan (Lebanon, Helem) – The best part of this week is to get a crash course in how we can best begin to leverage UN mechanisms for more sophisticated advocacy. It also provides insight into dealing with government delegates outside of the pressure and sometimes impossible conditions to meet with government reps in our own countries. The most useful part was to listen and incorporate the information into our messaging, positioning, alliance building, and strategies back home. 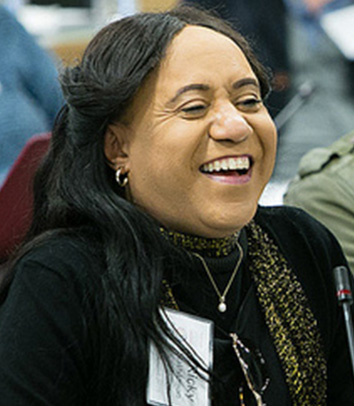 Rikki Nathanson (Zimbabwe, GATE) – Meetings with Missions of the United Nations was extremely useful as it gave continued insight into the workings of the UN. Even though the visits did not always provide positive results, the experience was useful, as I feel that the messages were put across to the diplomats, and that they took these away. The experience was also enriching in my growth as an activist, and had spurred me on to further my studies to pursue a career in international relations, so that I can begin to make a change from the inside as opposed to from the outside. 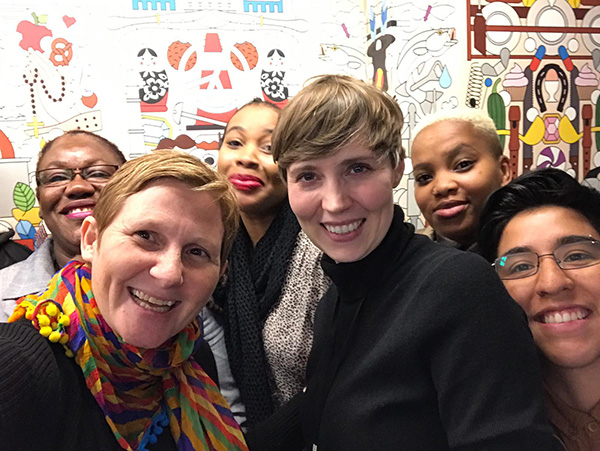 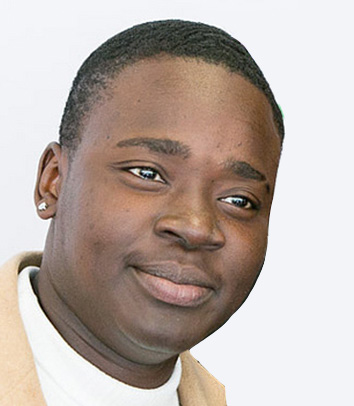 Alijah Caesar (Guyana, Guybow) – For me, the most useful part was the sense of power felt when interacting with the various missions. I felt like the work that we're doing is being noticed, and we aren't alone in this fight. 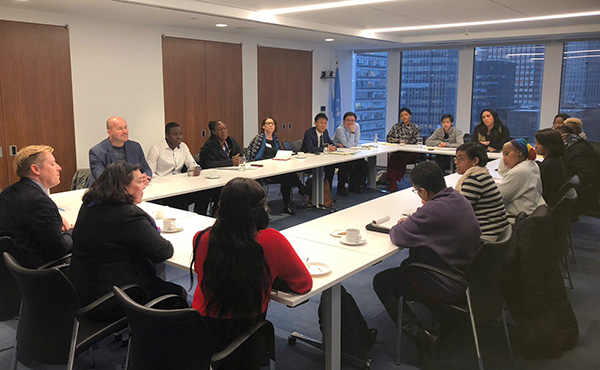 Advocacy Week participants meet with Ambassador of the UK to the UN, H.E. Karen Pierce and Senior Advisor Aaron Holtz at the UK Mission to the UN. (Photo credit: Siri May) 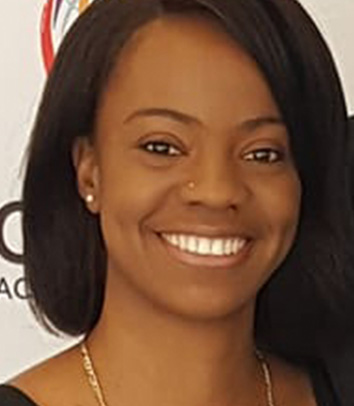 Suelle Anglin (Jamaica, J-Flag) – Advocacy Week has taught me to strategize how I engage in regional LGBT issues, which will be extremely helpful in my work which focuses on communication and partnership-building.

Advocacy Week participants and representatives from the Women. Peace and Security NGO Working Group meet with members of the UN Security Council at the French Mission to the UN in New York. (Photo credit: Sahar Moazami) 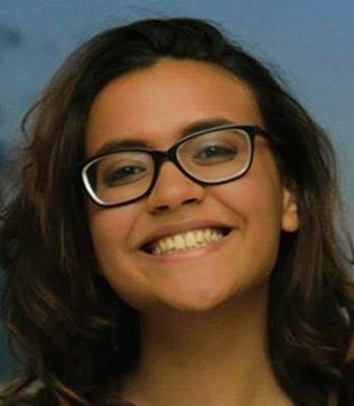 Khawla Bouaziz (Tunisia, Mawjoudin) – The most valuable part of Advocacy Week to me was the connections and friendships I came to make. The expansion of my network will be very beneficial for my organization, and it is a way of not only teaching about my own country’s struggle but also learning about other parts of the world and what activists on-the-ground are doing to better their situations. I learned a lot from them and I got inspired to do more and move further. It is a refreshing setting where I come to realize that as tough as the situations may be, we always have a backup and a support system that isn’t only emotional but also technical. 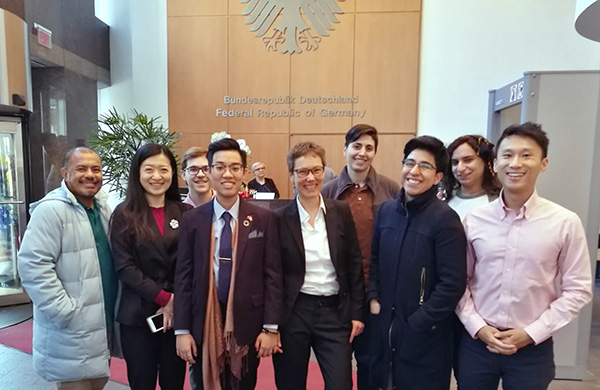 Advocacy Week participants attending a meeting with UN officials of the German Mission to the UN (Photo Credit: Kevin Wanzor)

On December 14th, OutRight says goodbye to UN Program Coordinator Siri May who is taking up a new role as Senior Advocacy Advisor at the Centre for Reproductive Rights. Siri joined OutRight in October 2016 and has worked alongside Sahar Moazami to create and expand a presence for OutRight and LGBTI rights at UN headquarters. OutRight wishes Siri all the best in her new role.

OutRight is now recruiting a UN Program Coordinator, a job based in NYC. Visa assistance will be provided. Please spread the word or contact OutRight if you want more information. 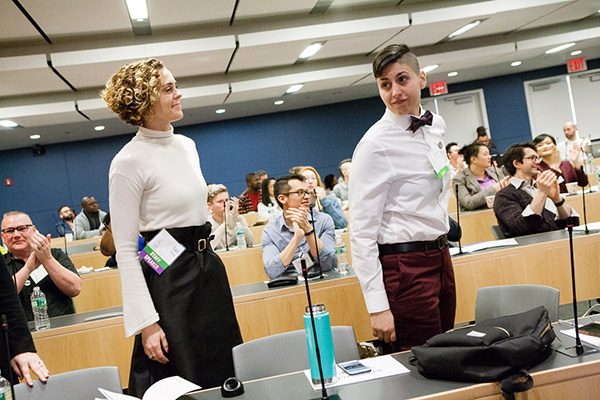 The UN Team’s Siri May and Sahar Moazami at the annual OUTSUMMIT in New York. (Photo credit: Brad Hamilton)