In the first quarter of 2022, in response to the ongoing vulnerability of LGBTIQ communities in the face of the COVID-19 pandemic and Russia’s unjust invasion of and aggression against Ukraine, OutRight continued its work providing relief through our COVID-19 Fund and launched a Ukraine Fund to address the risks faced by LGBTIQ people within and migrating from Ukraine.

OutRight celebrated the United Nations reopening its doors to civil society after two years of no civil society presence at its Headquarters. With our civil society partners, we continue to advocate for the UN to restore the policies that will allow civil society presence and participation at the same levels as before the pandemic. This includes reinstating the original number of passes that organizations with ECOSOC status are allowed to obtain as it is currently limited to only three. At the 66th Session of the Commission on the Status of Women (CSW), held in a hybrid format, OutRight once again worked with a diverse range of civil society members to ensure that LGBTIQ voices were heard and our presence was felt during discussions.

II. 66th Session of the Commission on the Status of Women

The 66th Session of the Commission on the Status of Women took place from 14-25 March 2022 in a hybrid format at the United Nations in New York. The CSW is the UN’s largest annual multilateral meeting setting a global agenda for women’s rights and gender justice. The event brings together hundreds of world leaders, ministerial delegations, and civil society representatives. This year’s CSW theme focused on achieving gender equality and the empowerment of all women and girls in the context of climate change and environmental and disaster risk reduction policies and programs.

OutRight recognizes that the same systems of patriarchy, rigid gender binaries, and archaic gender norms that oppress all women also keep LGBTIQ people marginalized and excluded, and that LBTI women and non-binary people face multiple and compounded forms of discrimination. Engagement with the CSW every year is a core element of the UN program’s work to ensure that LBTI women and non-binary people are included in the commitments Member States make in relation to continued progress for gender equality, and that gender justice is understood to include eradicating discrimination based on sexual orientation, gender identity, gender expression, and sex characteristics (SOGIESC).

As in previous years, OutRight worked closely with civil society to push for inclusion of diverse voices throughout the CSW. In particular, we continued our role as a co-convener of the LBTI Caucus and the Women’s Rights Caucus (WRC). Both are informal groups of civil society organizations that work together to identify areas of concern and coordinate advocacy strategies to ensure inclusion and progress for all women, girls, and people through the CSW. In both spaces we facilitated representation of international LGBTIQ voices. In the LBTI Caucus we worked with partners to develop shared advocacy strategies on the recognition of diverse women and girls and the impact of climate change on their lives. We also created tools and advocacy materials to push Member States and UN Women to integrate LBTI voices within official programing through statements as well as within the Agreed Conclusions. As a co-convener of the WRC, we worked to ensure that the LBTI Caucus advocacy priorities were integrated within the WRC advocacy strategy to highlight the ways in which LGBTIQ rights and women’s rights are inherently interlinked and must be maintained within a setting like the CSW.

To better equip activists and advocates with information related to engagement at the CSW, OutRight has created resource documents which can be found here.

The Agreed Conclusions are the main output document of the CSW outlining Member States’ joint commitments and recommendations for continuing advancement of gender equality. The text of the Agreed Conclusions is the product of lengthy negotiations between states. It is an important tool that civil society organizations can use to hold their governments accountable for the commitments made and advocate for further change at a domestic level. This year, negotiations were conducted in person for the first time since 2019 and civil society members were present in the building to push Member States on various priorities.

Civil society coordination around the Agreed Conclusions was robust, and OutRight engaged heavily to ensure LGBTIQ inclusion. We collaborated to push for language in the Agreed Conclusions that referenced the diversity of women, girls, and gender non-conforming people, recognized the amplified impact of climate change on individuals based on multiple and intersecting forms of discrimination, and committed to ensuring that climate change responses preserved access to sexual and reproductive health and rights.

Member States adopted this year’s Agreed Conclusions at the end of the session. States recommitted to a gender equality agenda and there were some key areas of progress, such as an increase in recognition of diversity. However, the negotiations made clear that it is still difficult to get explicit inclusion of SOGIESC language within the document.

OutRight, along with partners ILGA, RSFL, and COC Netherlands, held a CSW side event on 14 March titled “A Call for Inclusion: Gender Environmentalist Voices in Climate Action.” This event focused on the experiences of sexual and gender diverse people who face systematic and intersecting forms of discrimination in the climate change movement as they attempt to advance climate action campaigns and fight for biodiversity around the world. The panel discussion was moderated by OutRight’s UN Program Officer Luíza Veado and featured speakers such as Lady Miki Charlamagne (Fiji), Benjamin Sotomayor (Chile), Genesis Whitlock (Antigua and Barbuda), and Topaz (Mexico). Panelists highlighted experiences such as the lack of inclusion of LGBTIQ-focused responses to climate disasters and the impact of climate change on small islands and those who are most marginalized in these countries. 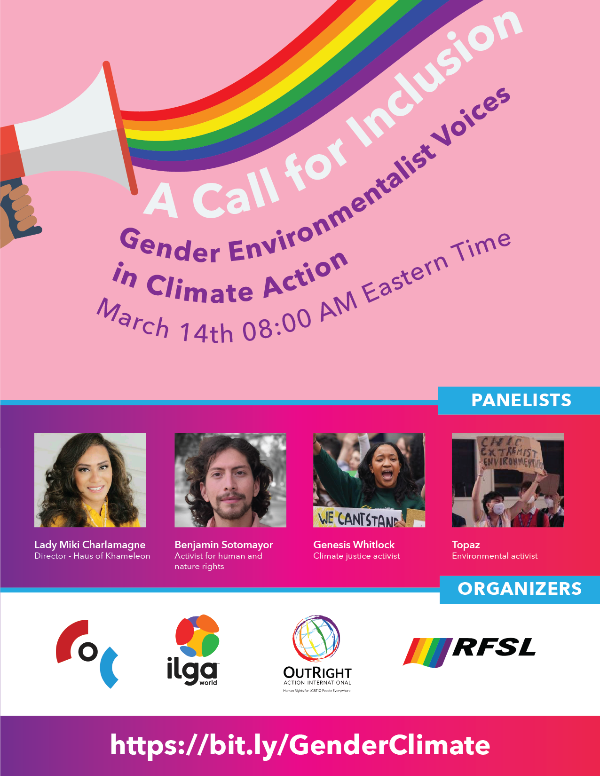 In addition, OutRight’s Senior Director of Law, Policy and Research, Neela Ghoshal, spoke at a side event organized by MADRE titled “Fighting Against Impunity for Gender-Based Crimes: A Policy Paper on Gender Persecution.” The discussion articulated why the International Criminal Court should issue a policy paper making clear that the crime of “gender persecution,” under the Rome Statute, is understood to be inclusive of crimes against humanity committed on the grounds of sexual orientation, gender identity, gender expression, and sex characteristics. 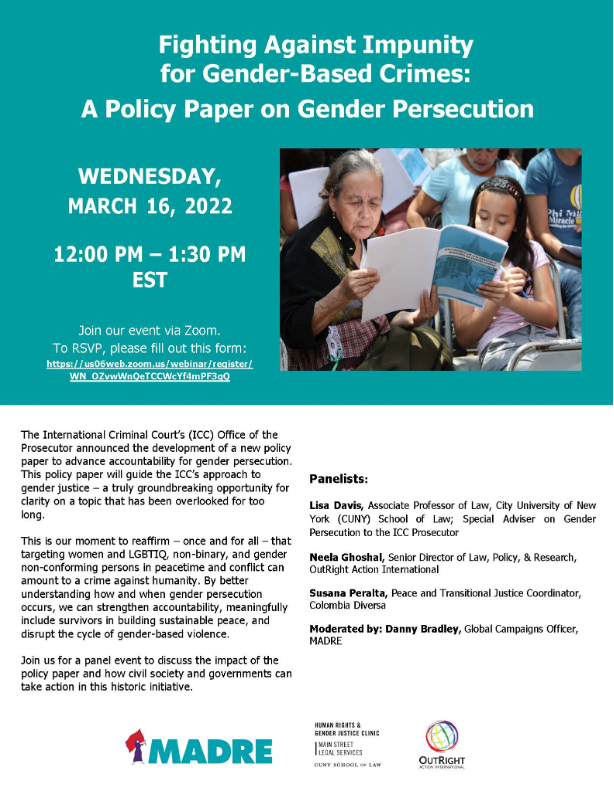 Every year, OutRight hosts the UN Religion Fellows program, discussed in further detail below. The program includes supporting a cohort of LGBTIQ civil society activists from around the world who work in UN spaces to dismantle religiously-motivated anti-LGBTIQ bias. 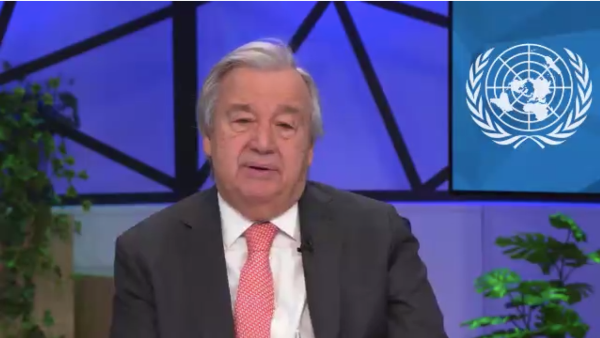 On March 22, OutRight UN Religion Fellow Vidda Faustino had the opportunity to comment in the official session of CSW on “Building Resilient Futures: Bridging the Gap Between the Physical Science and Social Science Communities to Advance Gender Equality in the Context of Climate Change, Environment, and Disaster Risk Reduction.” Vidda introduced the importance of creating measures to guarantee the inclusion of LGBTI persons and specifically LBTI women in science, technology, and innovation spaces, as they are underrepresented and encounter barriers to full participation. 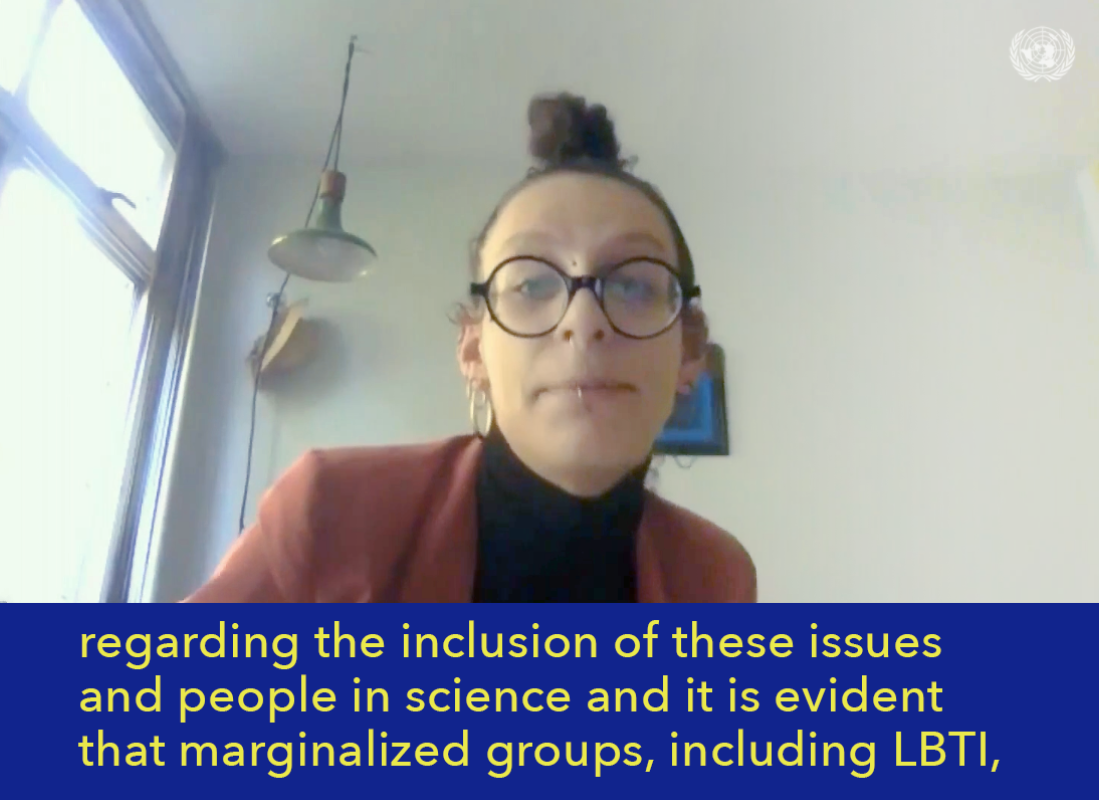 UN Women is a UN agency committed to the realization of the goal of universal gender equality. For the past 15 years the LBTI Caucus has engaged with UN Women and held an annual meeting with the executive director to express Caucus positions around inclusive gender equality. This year, the LBTI Caucus met with the newly-appointed Executive Director, Sima Sami Bahous, to reconfirm UN Women’s commitment to LGBTIQ inclusion within the agency’s work and the work of the CSW. The executive director and other UN Women representatives in the meeting reaffirmed their commitment to LGBTIQ-inclusive programing and the need to create a space for marginalized groups who understand the needs of their communities better than any other. During the discussion they also announced that the UN Women SOGIESC Specialist position has become permanent, ensuring that this position will continue to push within the agency to highlight LGBTIQ issues. 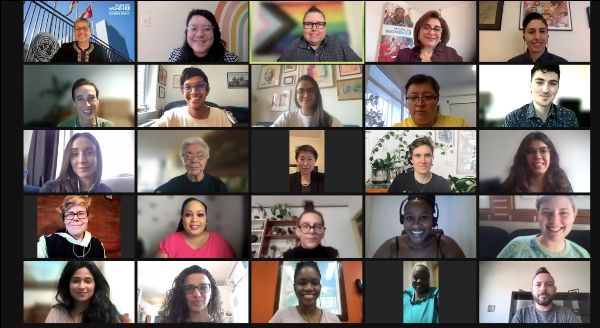 The UN LGBTI Core Group is an informal group of 37 states and the delegation of the EU, the Office of the High Commissioner for Human Rights, Human Rights Watch, and OutRight Action International, which collaborate in mainstreaming LGBTIQ equality at the UN headquarters in New York. OutRight is a co-founder of the group and serves as its secretariat. During the first several months of 2022 the UN LGBTI Core Group has made use of several entry points to promote the rights of LGBTIQ people.

On February 8, the UN LGBTI Core Group delivered a statement during the General Debate of the Commission on Social Development, which this year focused on eradicating poverty and hunger in all its forms and dimensions. Delivered by Ambassador Jose Manual Rodríguez Cuadros, Permanent Representative of Peru, the statement emphasized LGBTIQ communities’ particular vulnerabilities in the face of COVID-19, the need to incorporate these considerations in the design, implementation and monitoring of COVID-19 recovery plans, and the importance of addressing multiple causes of poverty, hunger and inequality, including SOGIESC-based discrimination. 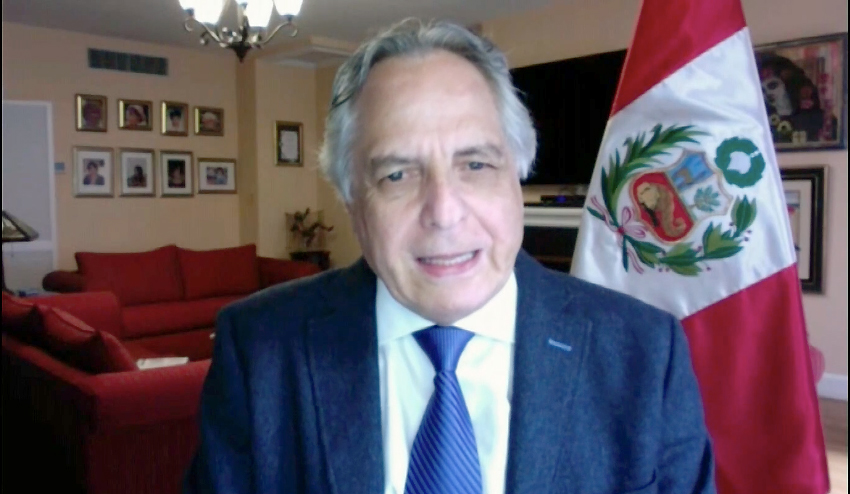 To mark the beginning of the CSW, the UN LGBTI Core Group held a ministerial level reception at the Mission of the Netherlands. This reception marked the first in-person social event of the UN LGBTI Core Group since the beginning of the pandemic. High-level participation, including by ministers from state delegations, reinforced the commitment to ensure inclusivity at this year’s CSW.

On 14 March, the UN LGBTI Core Group delivered its statement at the General Debate of the CSW. The statement, delivered by Her Excellency Sarah Schlitz, State Secretary for Gender and Equal Opportunity in Belgium, highlighted the disproportionate impact of climate change on LGBTIQ communities. For instance, the statement notes:

Factors that exclude LGBTI persons from accessing basic services such as quality health care, and safe water and sanitation, are exacerbated during emergency responses and recovery efforts. Climate change and environmental crises and disasters can curtail the sexual and reproductive health and rights of women and girls in all their diversity, when goods and services are limited or unavailable owing to the destruction of infrastructure, roads, and clinics.

The statement called on States to respond to the needs of women and girls in all their diversity in implementing inclusive climate change and disaster risk reduction policies. 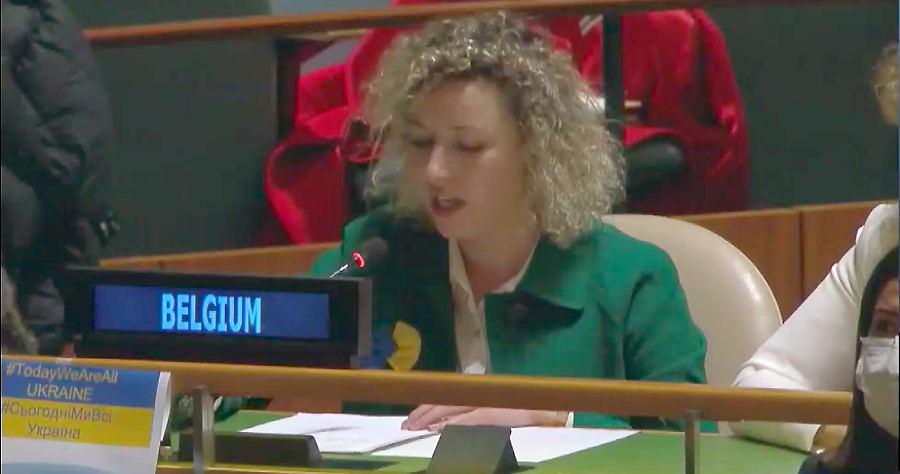 Her Excellency Sarah Schlitz, State Secretary for Gender and Equal Opportunity in Belgium

The OutRight Religion Fellowship is a 12-month program that supports LGBTIQ human rights defenders from around the world to use the New York-based United Nations system to add value to their existing work and to collaborate with peers on strategies for combatting religiously-based anti-LGBTIQ bias. Due to ongoing restrictions related to COVID-19, this year’s program will be completely virtual. The program is specifically designed to support existing work defending LGBTIQ people from the impact of religiously-motivated violence and discrimination in the Caribbean, Latin America, Sub-Saharan Africa, the Middle East and North Africa, Asia, and the Pacific.

You can meet the fellows, who joined the program in February 2022 here. OutRight is thrilled to have them with us. 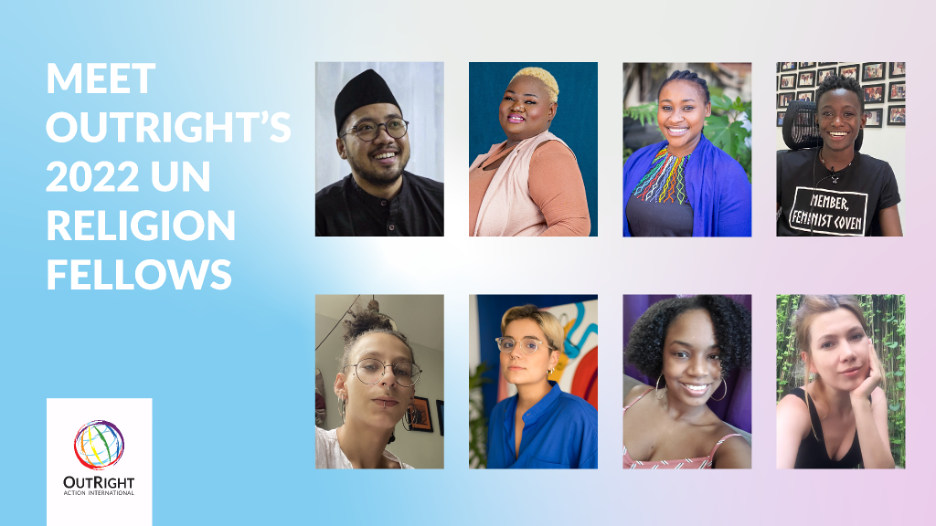 On 24 January the UN Program co-organized, along with ILGA, TGEU, RFSL, COC, ISHR, GATE, and Front Line Defenders, a two-hour dialogue with the staff of various UN Special Procedures to discuss ways in which they can integrate LGBTI issues within their respective mandates. Special Procedures are independent human rights experts and working groups tasked by the UN to investigate and report on human rights situations around the world. While one Special Procedures mandate holder focuses specifically on sexual orientation and gender identity, others, such as the special rapporteur on human rights defenders, also have opportunities to raise issues related to sexual orientation and gender identity with governments and in their thematic reporting. This dialogue brought the staff of over 14 Special Procedures together with 18 human rights defenders from across the globe to speak about language that is inclusive of LGBTIQ persons and the entry points to talk intersectionally about different issues that include a SOGIESC lens. This dialogue also included discussions about particular risks LGBTIQ activists face and how the mandates can help protect activists so that they can continue doing their activism.