OutRight's UN Program has achieved a number of key successes in the past several months, continuing its advocacy in UN spaces for the inclusion of LGBTIQ people. With the continued impact of COVID-19, the human rights work conducted by OutRight is more critical than ever as LGBTIQ people are among the most vulnerable communities in societies around the world. OutRight continues to support LGBTIQ communities through the organization’s COVID-fund, which has donated a total of USD $3.2M in grants--a testament to the critical importance of ensuring that UN efforts to promote sustainable development and human rights are LGBTIQ-inclusive.

Throughout the COVID-19 pandemic, with United Nations events and processes taking place predominantly in virtual spaces, civil society participation has been severely restricted, though we are pleased to announce that civil society access passes into the UN will be available again as of January 2022. Despite restrictions, OutRight has continuously worked to uplift the experiences and voices of LGBTIQ people in multilateral settings. In this edition of the UN New Yorker, we celebrate the impactful programming carried out throughout 2021.

Join us next week for OutSummit to find out more about our UN, and other work!

The 76th Session of the UN General Assembly (UNGA) began on Tuesday, 21 September 2021. The Third Committee, which focuses on human rights and humanitarian issues and is one of six main committees of the UNGA, began in the first week of October. Due to ongoing COVID-19 restrictions, civil society engagement was solely virtual, but, as always, was ever-present through ongoing conversations with Member States.

The Permanent Mission of the United States presented the resolution "Strengthening the role of the United Nations in the promotion of democratization and enhancing periodic and genuine elections." The resolution on elections is renewed every two years. This year's resolution, focused on gender-based barriers to access to free and fair elections, was of particular importance for LGBTIQ communities because it recognized limitations in access to free and fair elections due to a number of characteristics, including sexual orientation and gender identity (SOGI). To date, this is only the second UNGA resolution which includes explicit mention of SOGI.

Each time a UN resolution is presented that includes a reference to SOGI or gender diverse persons, a group of states submits an amendment attempting to remove the language. This year was no exception. Nigeria proposed an amendment to exclude the reference to SOGI on behalf of a group of countries, but the effort failed in a vote of 90 against, 58 in favor and 13 abstentions. A separate amendment was also proposed to exclude a reference to "women and girls in all their diversity," which also failed with 89 voting against, 55 in favor, and 12 abstentions.

After the failure of the amendment the resolution was adopted by consensus, meaning that no vote was held, indicating broad support for the resolution as a whole. The successful consensus adoption of the elections resolution builds on progress in recognition of the human rights of LGBTIQ people at the UN. It also reflects growing support for LGBTIQ equality around the globe: progress at the UN stems from achievements and increased visibility at the local, national and regional level. 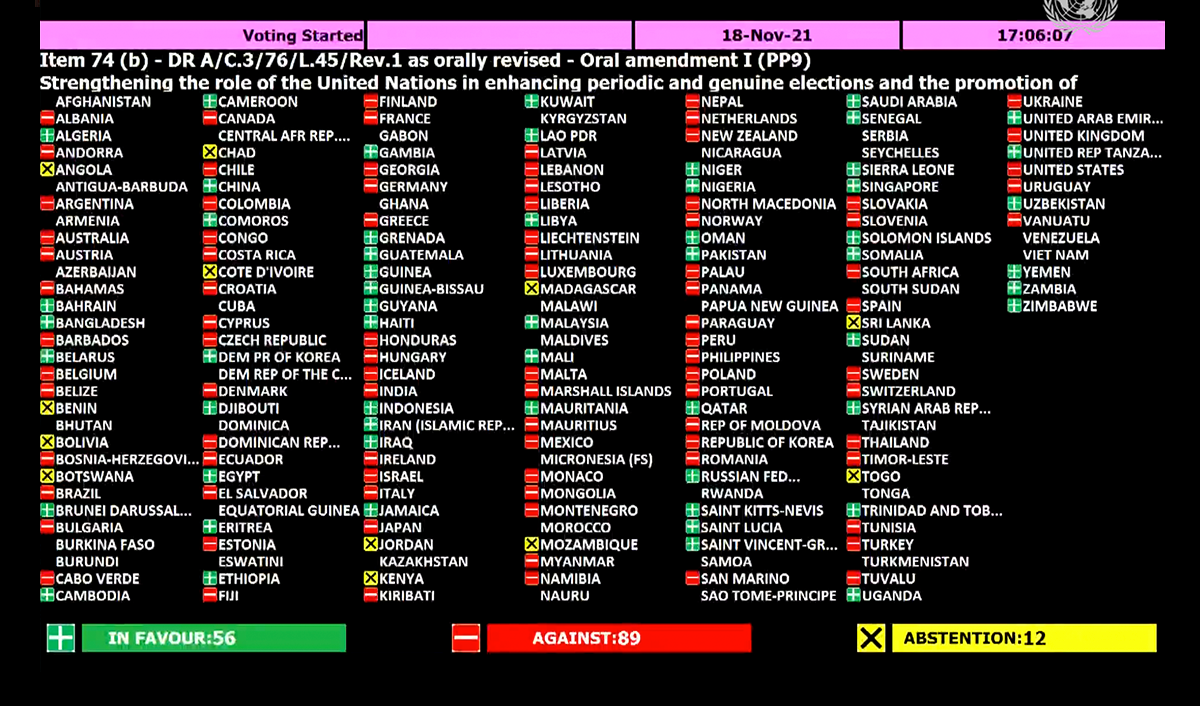 Vote on Amendment presented by Nigeria to remove a reference to the terminology "all their diversity" in the Elections Resolution. 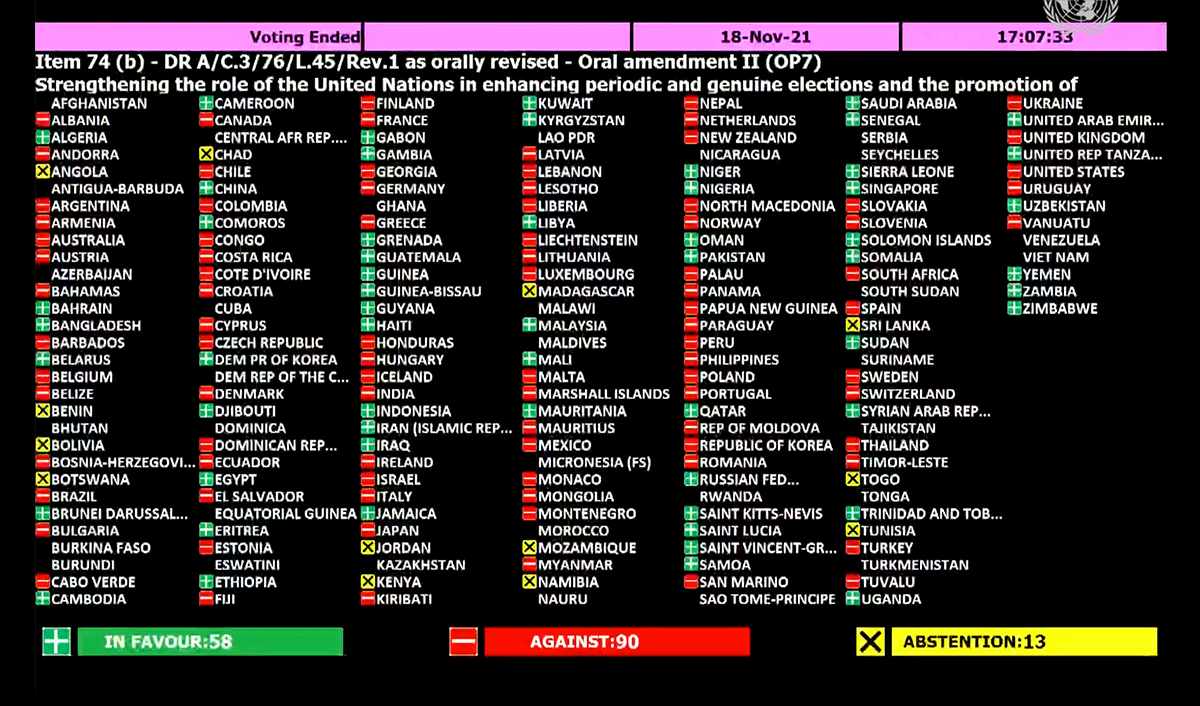 Vote on amendment presented by Nigeria which attempted to replace a listing in the Elections Resolution to effectively remove sexual orientation and gender identity.

Progressive language on diversity, such as “in all their diversity” and recognizing “multiple and intersecting forms of discrimination,” were also included in this year's The Rights of the Child resolution, Human Rights Defenders resolution, Resolution on Disabilities, The Implementation of the Beijing Declaration and Platform for Action Resolution, and on the Inclusion of Youth Resolution, all of which passed by consensus.

The UN LGBTI Core Group, an informal cross-regional group working together to mainstream LGBTI inclusion throughout UN mechanisms and processes at the UN headquarters in New York, concluded the year by reaffirming its mandate and undertaking several important achievements at the UNGA. 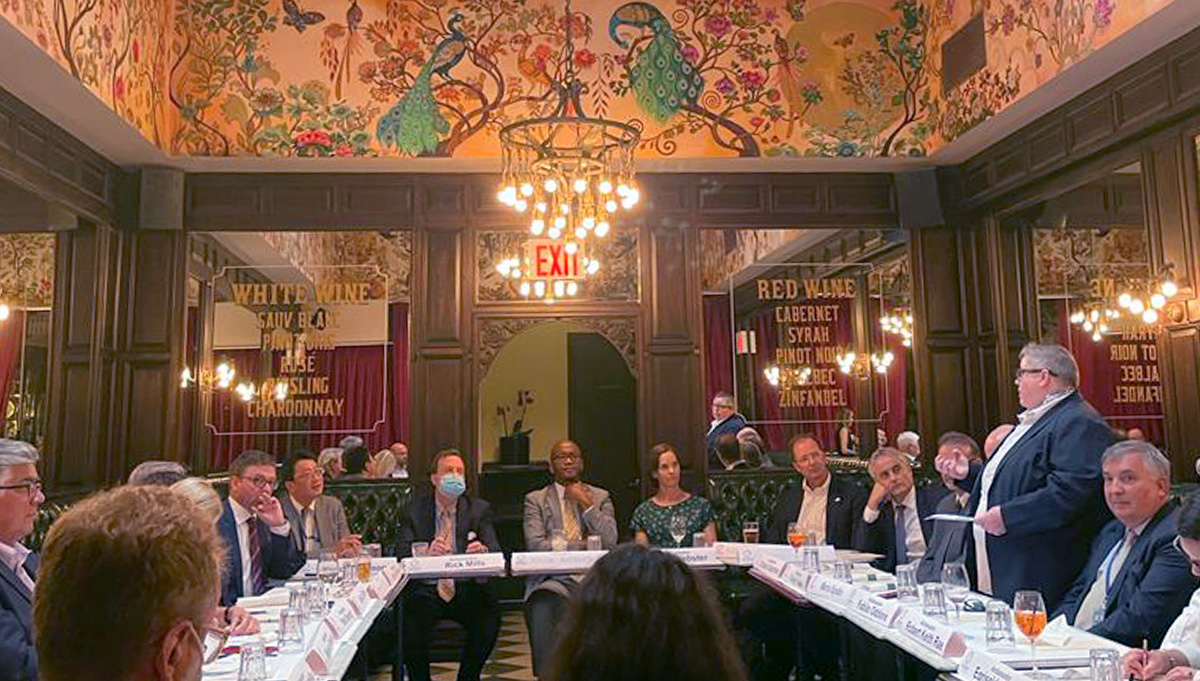 The UN LGBTI Core Group held its annual retreat to reaffirm its mandate and plan its work for the year ahead. OutRight, as the Secretariat of the group, organized and facilitated the various components of the retreat. The retreat began with a dinner attended by over 30 Ambassadors creating a space for a high-level discussion on what progress can be achieved in the next year at the UN. For the two days following the dinner, OutRight hosted several panel discussions featuring civil society activists, attended by working level diplomats from LGBTI Core Group Member States and as well as other UN Member States supportive of LGBTIQ equality. Activists discussed challenges facing LGBTIQ human rights defenders, law and policy progress at the national and regional level, and the importance of continuing to push for inclusive language at the UN.

Overall, the retreat strengthened knowledge on best practices to promote the human rights of LGBTIQ people, and concluded in the development of a work plan which included strategic approaches to its advancement in the UN headquarters in New York by promoting practical collaboration.

On 22 September, the UN LGBTI Core Group hosted a high-level event on ending criminalization of same-sex relations and trans identities. Government representatives from the government of Argentina and the Netherlands made opening remarks followed by panel discussions with members of civil society, government and UN entities.

The panel sought to position ending criminalization of same-sex relations and gender diversity squarely within the UN's 2030 sustainable development agenda, highlighting sustainable development goals related to non-discrimination, participation, and accountability. Panelists emphasized that ending criminalization is critical in order to ensure legal protection of LGBTIQ populations and the development of LGBTIQ-inclusive policies on topics including access to housing, social services, and healthcare. 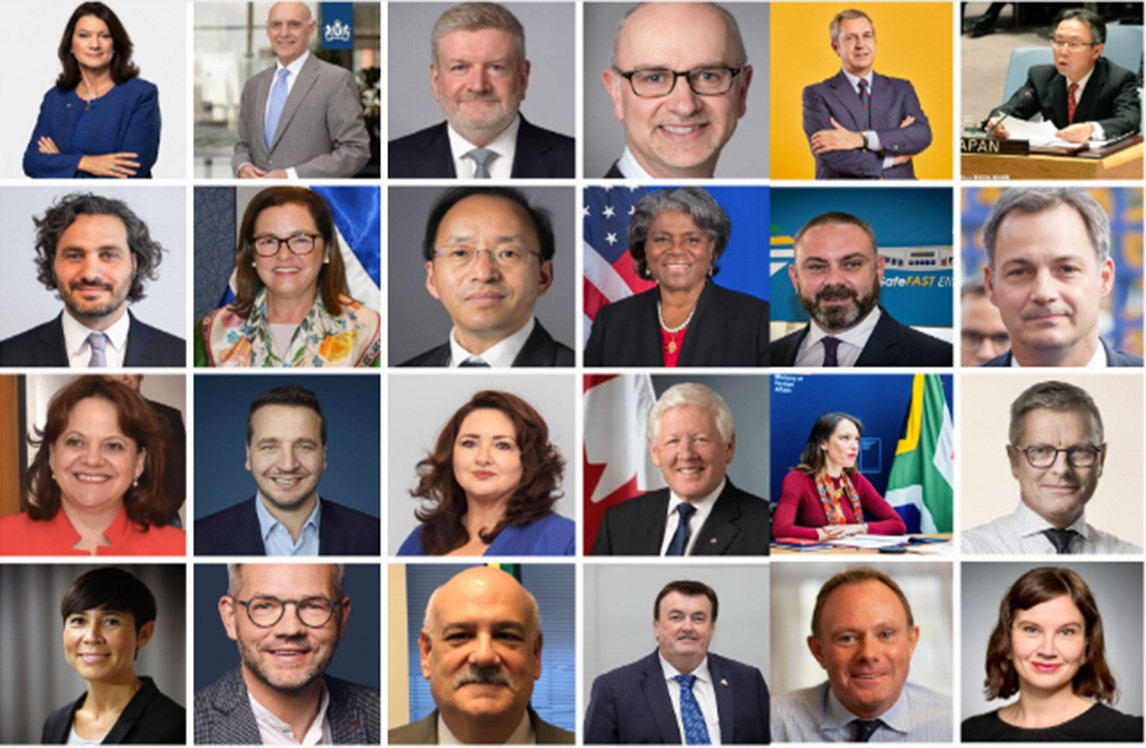 24 states sent messages for the event, showing public commitment to LGBTIQ equality. These statements can be found on the LGBTI Core Group website.

The UN LGBTI Core Group presented joint statements during numerous UN events and processes this year, including the High Level Political Forum, the Commission of the Status of Women, the Commission for Social Development General Debate, and the United Nations General Assembly. Statements addressed a wide breadth of the human rights of LGBTIQ people, including protection from violence and discrimination, decriminalization, HIV, sustainable development, disability rights, and the rights of older LGBTIQ people. These statements have been crucial in mainstreaming LGBTIQ issues into broader policy debates, providing an evidence base as to how policy discussions are relevant to LGBTIQ people. Statements made during Fall 2021 included:

A. Presentation of the Report to the UNGA 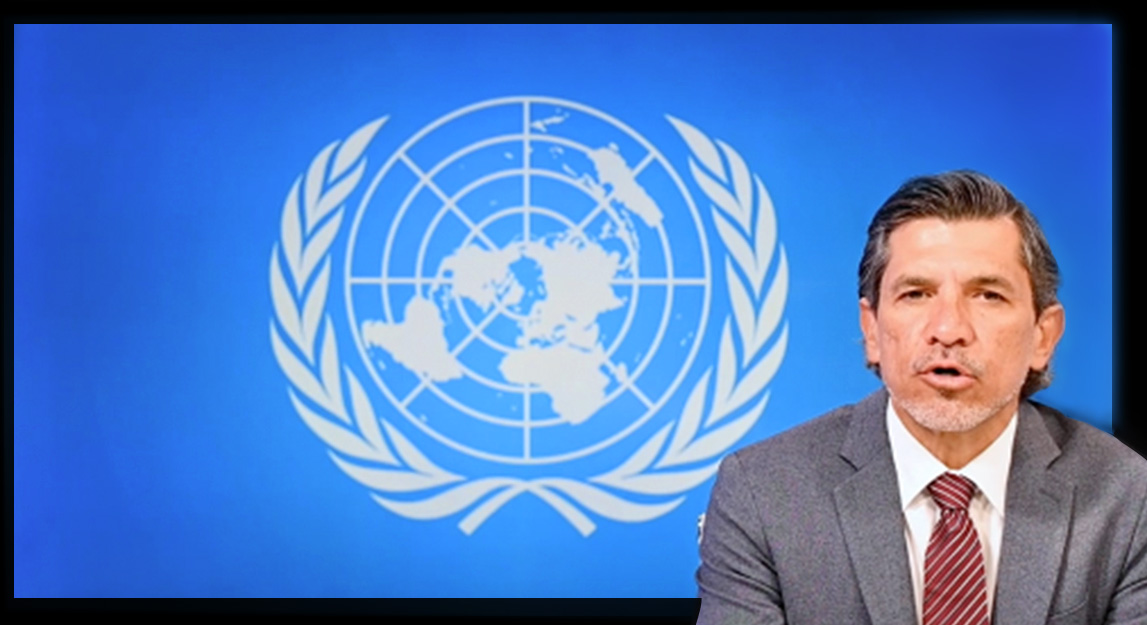 The Independent Expert on sexual orientation and gender identity, Victor Madrigal-Borloz issued a new report, "Practices of exclusion," analyzing the backlash against the incorporation of inclusive gender definitions in international human rights law, and highlighting nuanced ways to fight for sexual orientation and gender identity-related rights on the local, national, and international levels. The report, which analyzes how anti-gender forces hinder progress for both LGBTIQ and gender equality, is an important and timely development as such actors are becoming increasingly visible in multilateral systems such as the UN. In his speech presenting the report to the UN General Assembly on October 26, the Independent Expert drew attention to key themes of exclusion within the UN space, including the proliferation of anti-gender rhetoric as a device to clear the path for restrictive ideas and policies.

The report received support from members of the Third Committee, including commitments from a number of states from both the global north and global south to improve protections for individuals based on SOGI. 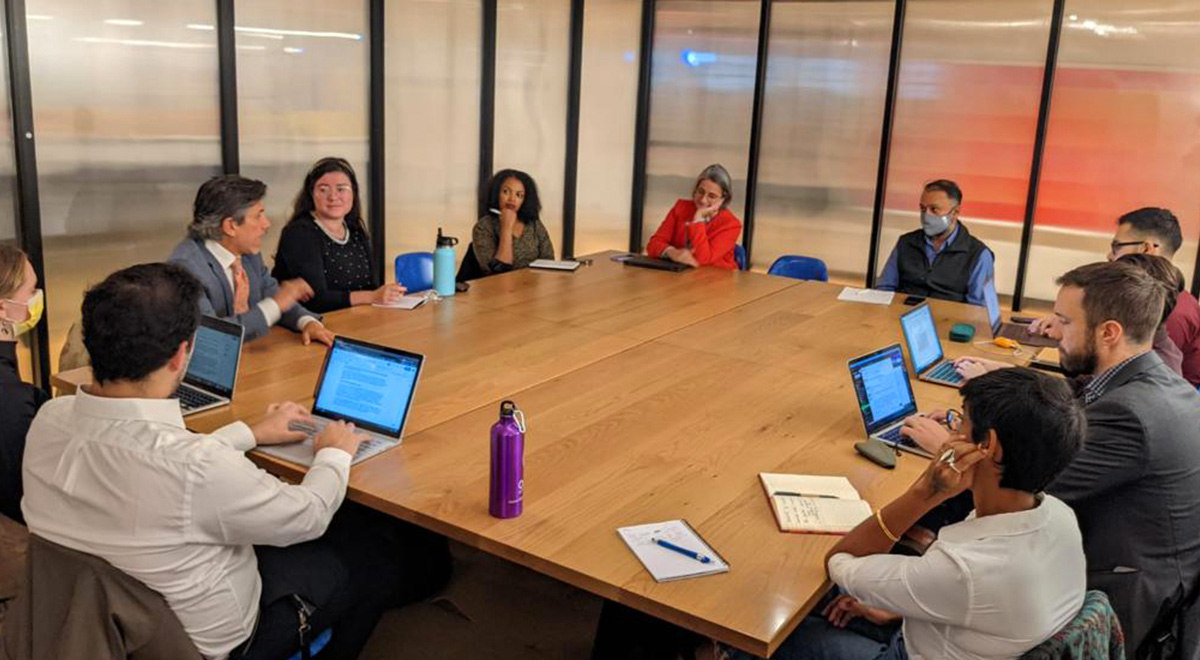 OutRight hosted a collaborative dialogue between civil society members and the Independent Expert on 29 October. We discussed advocacy opportunities and strategies for implementation of the recommendations set forth in his report "Practices of Exclusion," as well as upcoming projects planned for the next two years of his mandate.

B. UNGA Side Event on Gender Report - LGBTI and Femininst Movements: Pushing Back on the Pushback

Event Poster including the diverse range of civil society organizations which came together to organize and host the event on gender.

On 17 September, OutRight, along with the UN LGBTI Core Group and a diverse cross-regional group of LGBTIQ and feminist organizations, hosted a panel discussion focusing on the "Practices of exclusion" report and the rise of the anti-gender movement. Panelists included the new UN special rapporteur on violence against women, Reem Alsalem; GATE director Mauro Cabral Grinspan; government representatives from Argentina and the Netherlands; and the Independent Expert on sexual orientation and gender identity, Victor Madrigal-Borloz. Geeta Misra of the civil society organization CREA moderated the event. Panelists sought to highlight intrinsic links between LGBTIQ and feminist movements, and to positioned the diverse and unique challenges facing LGBTIQ individuals as a core element of the struggle for sustainable gender equality.

The event can be streamed here. 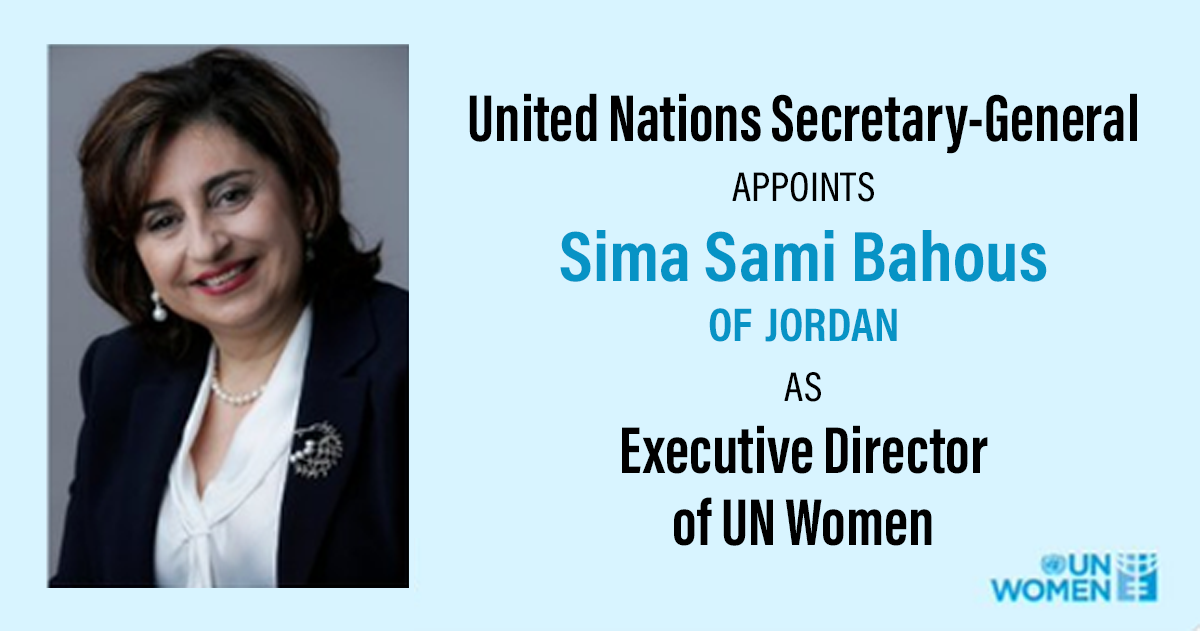 Sima Sami Bahous of Jordan was appointed as the new Executive Director of UN Women. Ms. Bahous previously served as Permanent Representative of Jordan to the United Nations in New York. She has over 35 years of experience in advancing empowerment and rights of women, addressing discrimination and violence, and promoting sustainable socioeconomic development toward the achievement of the UN Sustainable Development Goals.

To ensure continued inclusion of LGBTIQ voices in the work of UN Women, the LBTI Caucus, a informal coalition of over 300 civil society representatives from every region of the world, sent a joint letter to the new Executive Director requesting a meeting to discuss continued partnership on issues relating to the intersectionality of women’s rights, sexual orientation, gender identity and expression, and sex characteristics. 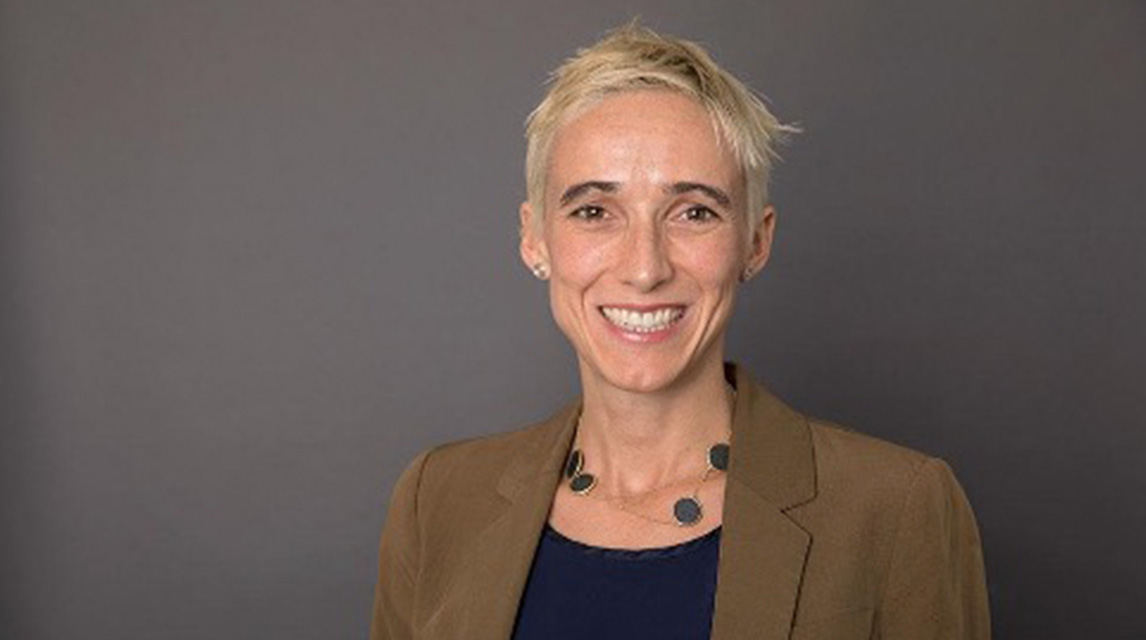 On 16 November, 2021, OutRight International hosted a meeting between members of the LBTI Caucus and Sophie West-Browne, who holds the position of Diverse SOGIESC* (LGBTIQ+) Rights Specialist at UN Women. This post was newly established at UN Women after years of advocacy by LGBTIQ activists. This post aims to ensure that LGBTIQ issues are grounded throughout UN Women's work. During the meeting, Sophie West-Browne discussed aspects of their role, emphasizing the agency's dedication to an LGBTIQ-inclusive approach to gender equality. They invited civil society members to continuously engage with them directly, and committed to facilitating engagement with UN Women field offices.

On 29 October 2021, in the context of the G20 Leaders’ Summit, the European Parliament Intergroup on LGBTI Rights, an informal forum for members of the European Parliament who wish to advance and protect the rights of LGBTIQ people, hosted the event "On the sidelines of the G20: how to achieve socio-cultural and economic inclusion of LGBTIQ persons?" OutRight International's Acting Executive Director, Maria Sjödin, took part in the event alongside panelists from ILGA Asia, ILGA World and GATE, to discuss how G20 countries can cooperate to improve protection of the human rights of LGBTIQ people.

Maria shared best practices from non-G20 countries, such as the legal gender recognition legislation in Argentina that allows people to change their gender markers on all documents based on self-identification. They also expressed concerns about the lack of coordinated efforts to end criminalization of consensual same-sex relations in 68 countries (including at least one G20 member); highlighted the need to ban discrimination against LGBTIQ persons in the workplace, housing, medical care, and education, and to ensure the availability of legal recourse against discrimination; and emphasized the importance of eradicating harmful sexual orientation and gender identity change efforts (so-called conversion therapy). 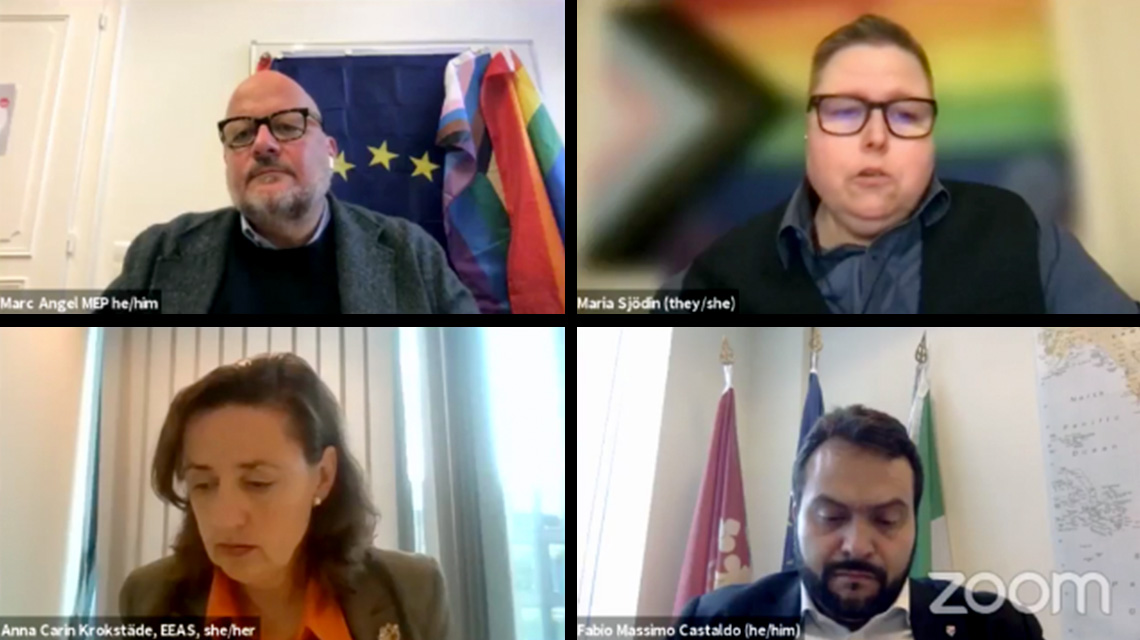 Maria stressed that “Every country has work to do to fully respect LGBTIQ people. All countries should look at themselves and support the change happening in other countries. Countries should look at best practices and implement them, no matter where they are. And, of course, should use their diplomatic toolbox to promote dialogue, point to best practices, and be supportive to creating the way of change that we need in order for LGBTIQ people to live in equality no matter where they are.”