Currently, the world is facing an unprecedented public health crisis. The full impacts of COVID-19 are yet to be realized, but we have already begun to witness unique effects on advocacy efforts of LGBTI individuals and human rights defenders. Outright’s UN Program team began to feel the effects of COVID-19 before widespread border closures or social-distancing measures, as the UN started taking steps towards shutting its doors and work plan for the indeterminate future back in February.

Despite a lack of physical access to UN spaces, OutRight and advocates around the world continue to push for the rights of LGBTIQ individuals and the most marginalized both in any response efforts to the crisis, and in ongoing work of the UN. While the situation continues to unfold, the UN Program team will focus on providing up to date information about ongoing access and engagement points for working with the UN to ensure that the rights of LGBTIQ individuals globally keep being voiced in alternative online platforms currently being used.

In this time of crisis we can see governments turning inward, closing borders, restricting freedoms in the name of public health. In this environment civil society is also under threat. It is crucial to ensure that the crisis response fits within a human rights framework, not outside it. The COVID-19 crisis will not silence civil society, but it is up to us and our partners to claim the alternative spaces being used and make our voices heard.

I. The 64th Session of the Commission on the Status of Women

Similar to previous years, OutRight’s UN Program devoted immense efforts to prepare for the 64th Session of the Commission on the Status of Women (CSW64). The CSW is the UN’s largest annual multilateral meeting on gender equality and gender justice bringing together hundreds of world leaders and ministerial delegations, as well as over 12,000 representatives from civil society. As harmful outdated gender norms and expectations have a crucial impact on the discrimination, exclusion and violence LGBTIQ people face, this is an important platform for LGBTIQ activists to engage in.

This year’s CSW was unique as it was meant to focus on the 25th anniversary of the Beijing Declaration and Platform for Action (BPfA). The BPfA was an extensive and historic document serving as a blueprint for advancing gender equality. Although the document did not mention LBT women specifically, it was the first global platform where lesbian, bisexual and trans women actively engaged to ensure their visibility. 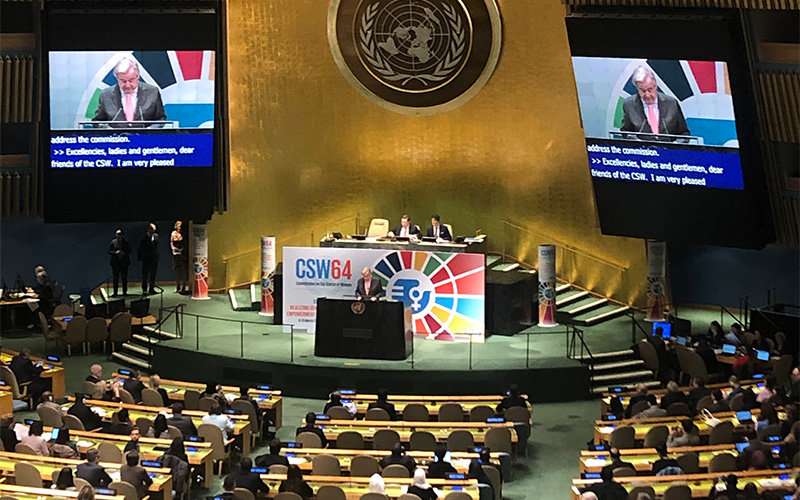 The CSW64 was scheduled to be held from March 9-20, 2020 at UN Headquarters in New York City. As in previous years, the UN Program worked with the LBTI Caucus and, as a co-convener of the Women’s Rights Caucus (WR), to center the lived experiences of LBTI and gender non- conforming women and people within civil society advocacy strategies targeting UN Member States to ensure that outcomes are also LGBTIQ inclusive. The LBTI and WR Caucuses are informal cross regional coalitions of hundreds of organizations and representatives advocating for gender equality at the international, regional, national and local level.

To mark the Beijing+25 anniversary, this year’s CSW did not issue Agreed Conclusions outlining next steps that need to be taken on the route to achieving gender equality. Instead Member States worked on a joint Political Declaration meant to reaffirm and reflect on the commitments made in the landmark document adopted 25 years ago in Beijing. The Political Declaration reaffirmed the commitments made in 1995, but fell short of taking any further steps toward committing to achieving gender equality or explicitly recognizing the impact of gender inequalities on LGBTIQ people. As a response, civil society came together to create a Feminist Declaration on Beijing+25, reflecting the inclusive and progressive ambition that states should have taken in the Political Declaration.

OutRight’s press release in response to the Political Declaration was picked up by the New York Times and the Washington Post. 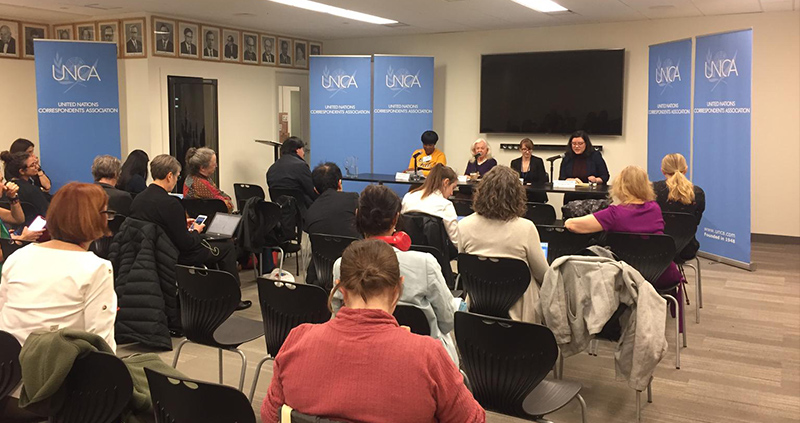 UN Program Officer Luiza Veado speaks at the Press Conference on the launch of the Feminist Declaration by the Women's Rights Caucus. (Photo credit: OutRight)

On March 2, due to the WHO issuing a level four alert related to the spread of COVID-19, the full program of the CSW was postponed to an indefinite future date. On March 9, Member States held a procedural meeting to adopt the Political Declaration. With the ongoing developments on COVID-19, the likelihood of holding a CSW64 session similar to past years later this year is decreasing. This is of the utmost concern as CSW continues to hold a vital place for all stakeholders including civil society to come together to discuss the ongoing challenges in achieving gender equality. Particularly, as we continue to see the gendered impacts of the pandemic, such as increasing gender-based violence and the disproportionate economic impact on all women and gender non-conforming people, it is more vital than ever to ensure that the global community continues to highlight gender equality and hold space for feminist activism. OutRight continues to work within the LBTI and WR Caucuses to discuss tactics and strategies to continue to pressure Member States to focus on the need for spaces to discuss gender equality collaboratively with all stakeholders including Member States and civil society representatives.

OutRight’s UN Program worked with the LBTI Caucus to release the following statement on the impacts of COVID on LGBTIQ+ people.

As an important part of the commemoration of the 25th anniversary of the Beijing Declaration and Platform for Action, the Generation Equality Forum was created. The forum is a global gathering for gender equality, convened by UN Women, co-chaired by the governments of France and Mexico, in collaboration with civil society. Two forums were scheduled to take place in May and July of 2020, but due to COVID-19 have been postponed to 2021.

Prior to the Generation Equality Forums in Mexico and France, several regional meetings took place to convene States, civil society and other stakeholders to discuss regional advances and ongoing concerns about gender equality that need to be brought to the global conversation.

OutRight was present in all of the regional meetings in Geneva, Addis Ababa, Bangkok and Amman in October and November 2019. We worked together with partners to guarantee inclusion of LGBTIQ issues and push for our ally States to ensure that LGBTIQ people are not left behind in the Beijing+25 process. Each meeting had a different focus on inclusion and different levels of participation of civil society, but all featured important efforts done by civil society to have as broad and inclusive a gender equality agenda as possible.

The last of the regional meetings was the Latin America and the Caribbean meeting, which occurred in January in Santiago, Chile. In that meeting, States agreed on the Santiago Commitment, a document with commitments to include “a gender, intersectional, intercultural and rights perspective” in the work that States are undertaking. 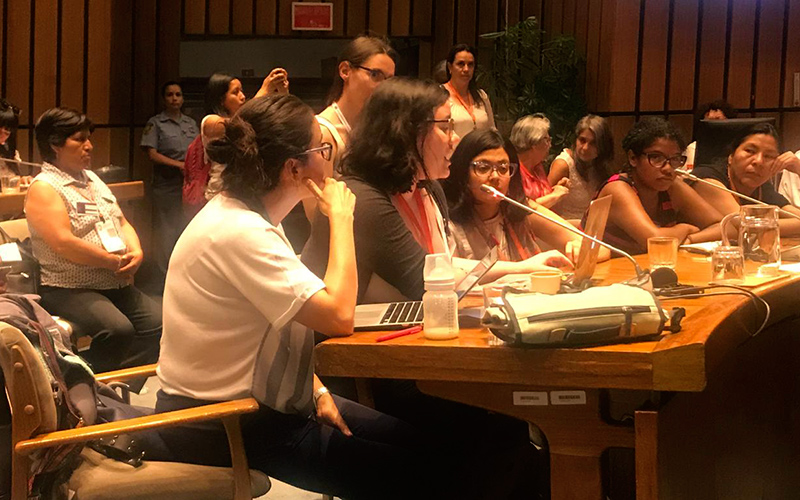 OutRight is securing deeper engagement in the forums through the Civil Society Advisory Group which Executive Director, Jessica Stern, is a member of. The group includes 21 members from broad and diverse constituencies, supports all the decision-making for the Generation Equality Forums, and ensures that priorities of civil society are reflected in the Forum’s design and outcomes. It is really important to have LGBTIQ representation on the Advisory Group to guarantee that no decision in this process is taken without taking LGBTIQ issues into consideration. Jessica participated in the Generation Equality Forum design sprint that took place in Paris in February, where details of the Forums were discussed among States, civil society and other stakeholders. 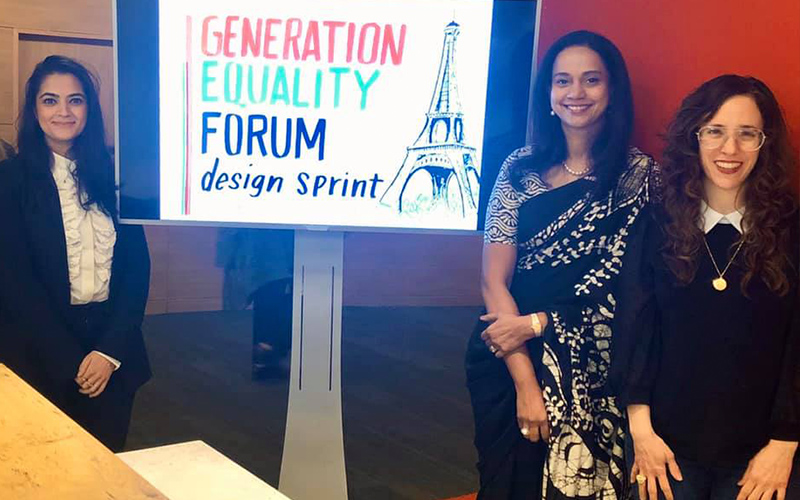 Jessica Stern takes part in the Generation Equality Forum "design sprint" that took place in Paris in February, where details of the Forums were discussed among States, civil society and other stakeholders.

To help facilitate the engagement of global civil society and to ensure robust LGBTIQ participation in the Global Equality Forums and the Beijing+25 process overall, OutRight has put together a reference guide. The guide provides an overview of the original Beijing Platform for Action, the processes taking place to mark its 25th anniversary, and how to engage with them inclusively. 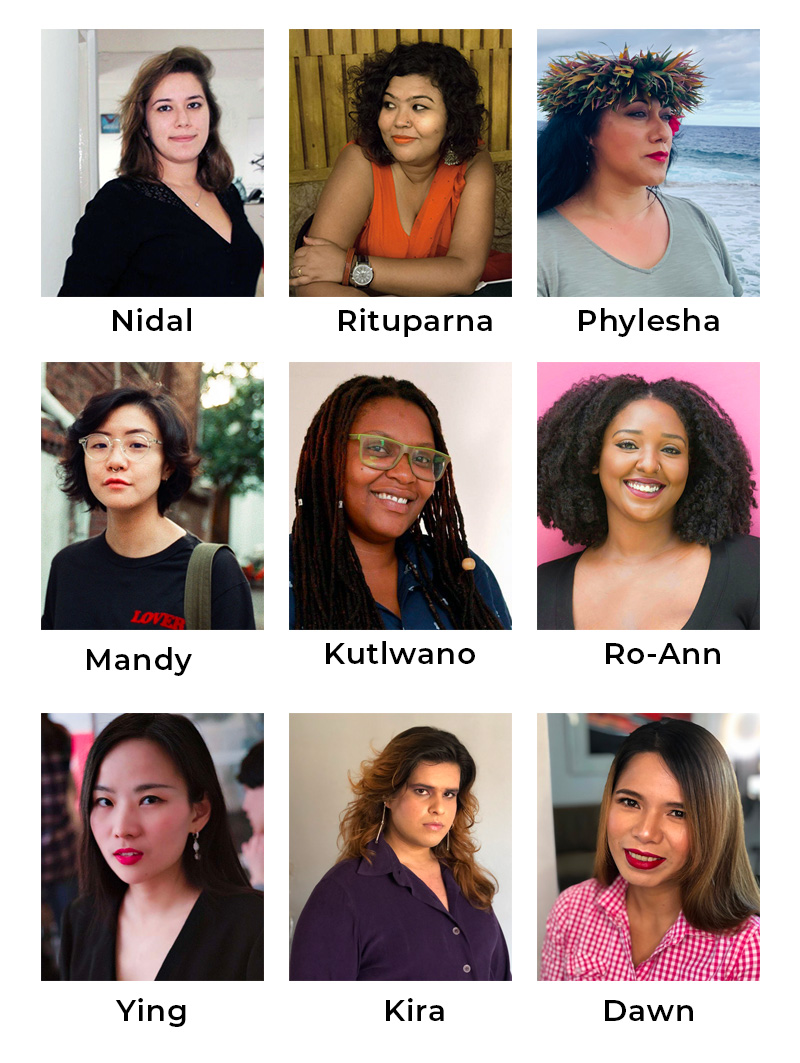 Additionally, for the third year running, with support from the Global Faith and Equality Fund of the Horizons Foundations, OutRight recruited four activists to engage in our year-long, immersive Religion Fellowship Program. The fellowship is aimed at defending LGBTIQ people from the impact of religiously motivated violence and discrimination, through thorough engagement in various processes of the UN. Meet this year’s Religion Fellows here.

This year for International Women’s Day on March 8, OutRight asked our fellows what their visions were for a gender equal world. See their responses here.

In light of COVID-19 and the shutdown of UN conferences and forums, including the Commission on the Status of Women, OutRight is working diligently to keep connecting with all our fellows and provide them with information around UN events and conferences and the Generation Equality Forums on a timely basis. We’ve started to put together webinars and sharing spaces to ensure that the fellows from all regions of the world are able to interact and share best practices and lessons learned from their own work, as well as to continue to build capacity around engaging with UN Mechanisms.

On February 28, the Independent Expert on protection against violence and discrimination based on sexual orientation and gender identity (SOGI IE) held an expert consultation on his upcoming report on “conversion therapy” practices which seek to convert, suppres, or divert one’s sexual orientation or gender identity, often through physically or psychologically abusive means. OutRight’s UN Program Officer Sahar Moazami and our research consultant, Amie Bishop, who authored OutRight’s recent groundbreaking report on the global reach of “conversion therapy”, attended the consultation and participated in the timely and important conversation. 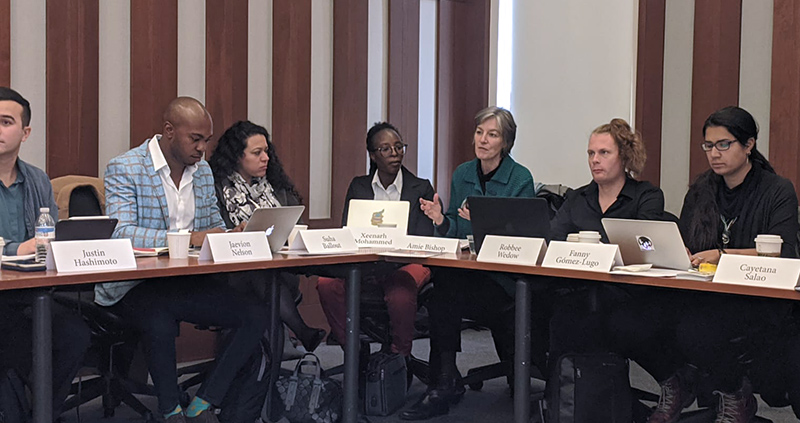 This consultation was important as it brought together experts from around the globe currently working on eliminating or curbing “conversion therapy” practices at the local, national and global level. Participants were able to identify gaps in research and data collection, discuss best practices and ways to move forward towards the goal of curbing these harmful practices. A write up of the consultation written by Amie Bishop can be found here.

Many events have been postponed, canceled or moved online due to COVID-19. Please check websites for information about events sponsored by the United Nations or OutRight.