The OutRight United Nations Program would like to thank all of our partners for a tremendous 2019!

Over the course of the year OutRight’s UN Program team helped increase LGBTIQ visibility at the Commission on the Status of Women and the High Level Political Forum. We organized the UN LGBTI Core Group's annual retreat and, as the Secretariat for the group responsible for the organization of the group's activities, we supported the Core Group’s events for the International Day Against Homophobia, Transphobia and Biphobia, and a High Level Event  about ending hate speech against LGBTIQ people held on the sidelines of the General Assembly.

The UN Program team was also thrilled to work with UN Women to host a historic event about the rights of transgender and gender non-conforming people, the first ever event by UN Women to recognize gender beyond binaries, held on the margins of the High Level Political Forum. We celebrated major successes at the International Law Commission and the Human Rights Council with the renewal of the mandate of Independent Expert on protection against violence and discrimination based on sexual orientation and gender identity. We ended 2019 with OutRight’s annual UN Advocacy Week and OutSummit conference.

Advocacy Week participants with members of the UN LGBTI Core Group after a panel event during Advocacy Week at the UN. (Photo credit: OutRight)

On September 24, together with the UN LGBTI Core Group, we hosted a High Level Event aimed at addressing hate speech against LGBTIQ people in traditional and social media. The opening remarks were made by the Prime Minister of Luxembourg, Xavier Bettel, whose emotional and intensely personal account brought the audience to tears and to their feet.  Remarks were also made by Ministers of Foreign Affairs for the Netherlands and Argentina, Stef Blok and Jorge Faurie.

A panel moderated by Jessica Stern and featuring the High Commissioner for Human Rights Michele Bachelet, Editorial Director at NBC Out Brooke Sopelsa, Executive Director of the Eastern Caribbean Alliance for Equality and Diversity based in St Lucia Kenita Placide, and Head of Advocacy at the Trevor Project Sam Brinton, discussed how hate speech can be tackled. The panel highlighted the importance of classification of what constitutes hate speech, as opposed to freedom of expression; countering misinformation and ignorance; and having a powerful counter-argument, as key elements to combating hate speech.

The event was attended by over 30 UN Member States, numerous media outlets, as well as over 400 participants from civil society.

For more information, and to watch the event, have a look at our reflection piece. 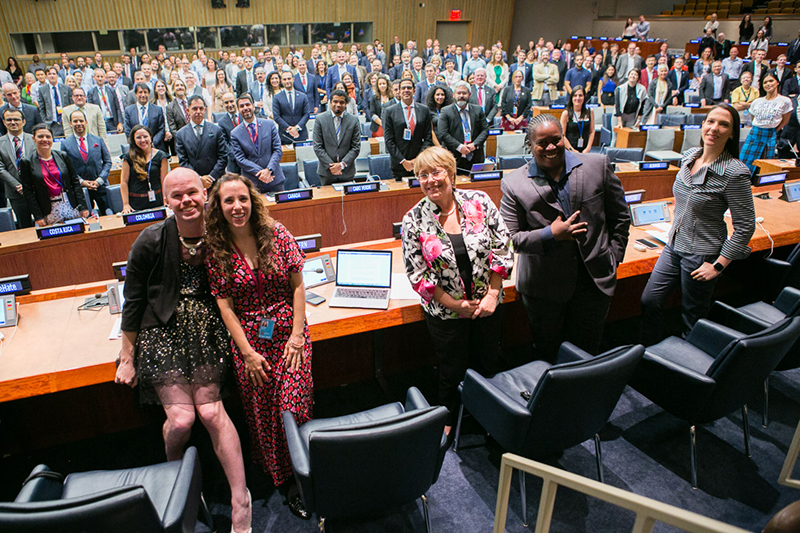 1. Renewal of the Independent Expert on SOGI

On October 7 the Third Committee of the UN General Assembly adopted the resolution presenting the Annual Report of the Human Rights Council without challenge to the extension of the mandate of the Independent Expert on protection against violence and discrimination on the basis of Sexual Orientation and Gender Identity (Independent Expert on SOGI). The high number of States supporting the renewal of the mandate at the Human Rights Council in July and the lack of a challenge at the Third Committee is a clear sign that the international community is more aware of the need for the mandate to address the violence and discrimination people face based on their real or perceived sexual orientation or gender identity. 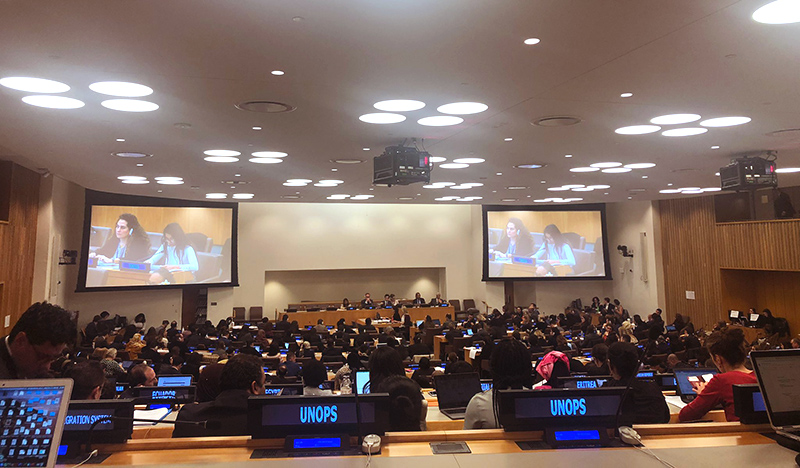 Adoption of the Human Rights Council Report in the UN General Assembly Third Committee without a challenge to the mandate of the IE SOGI. (Photo credit: OutRight)

The special procedures of the Human Rights Council are independent human rights experts with mandates to report and advise on human rights from a thematic perspective, such as the Independent Expert on SOGI, or a country-specific perspective. The UN Program team collaborated with the civil society organization International Service for Human Rights to organize civil society meetings with mandate holders during this year's Special Procedures Week. 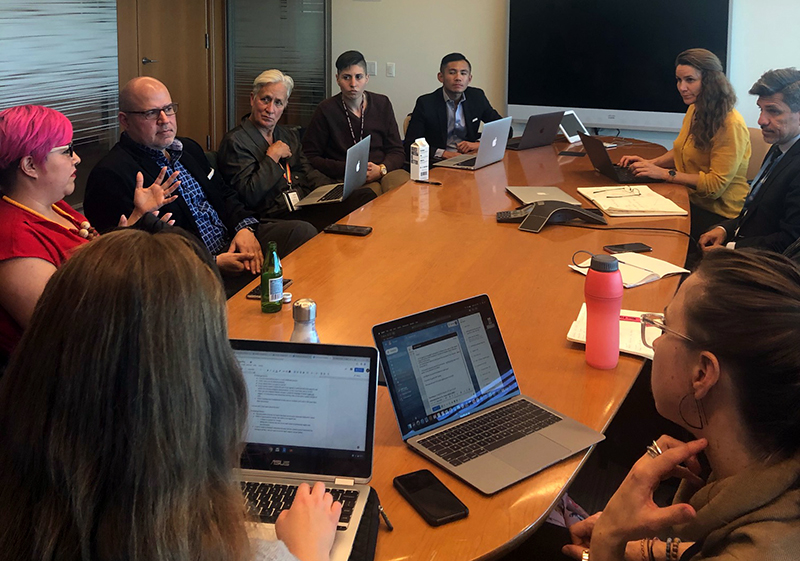 3. The Independent Expert on SOGI’s Report to the General Assembly

On October 24, the Independent Expert on SOGI presented his second report to the Third Committee of the General Assembly, and held an open dialogue with States. The report highlights how discriminatory laws and socio-cultural norms exclude and marginalize LGBTI people from education, health care, housing, employment and occupation, and other sectors. The presentation of the Independent Expert on SOGI’s report marks an important moment during the General Assembly as it ensures that the violence and discrimination faced by LGBTI people globally is addressed in an official space, providing States with the opportunity to engage and learn. 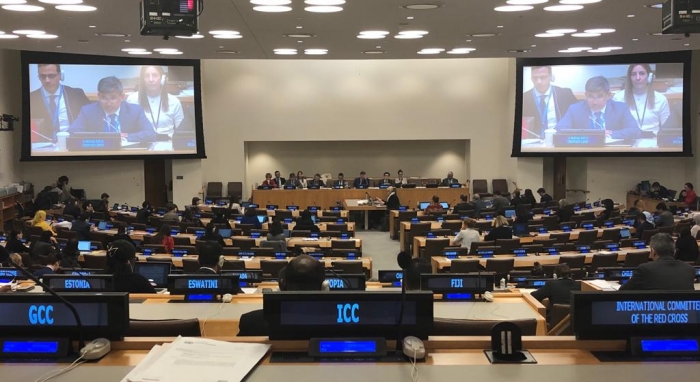 On October 21 the UN LGBTI Core Group, an informal group of 30 states working together to mainstream LGBTI inclusion in UN mechanisms and processes, hosted an interactive dialogue between its members, the Independent Expert on SOGI Victor Madrigal-Borloz, and representatives of countries members of the Equal Rights Coalition (also an informal group of states working across borders, in and outside of the UN system, to collaborate on progress for the recognition of the human rights of LGBTIQ people). In this meeting, the LGBTI Core Group welcomed two new members: Bolivia and Sweden. 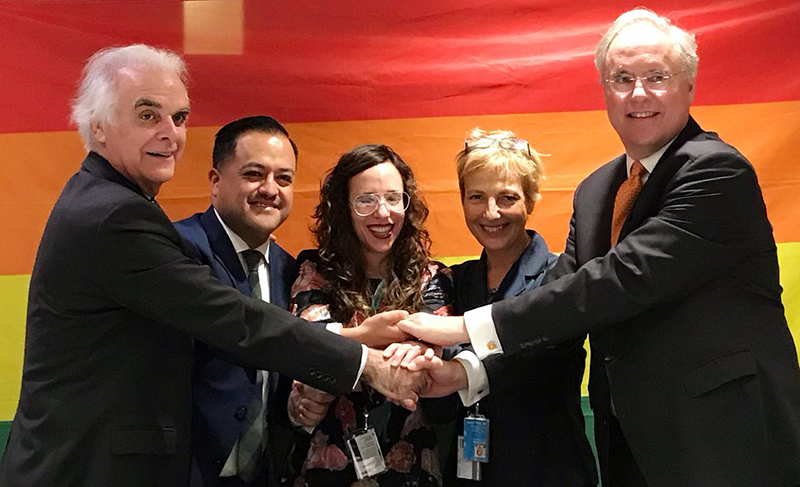 The Member State representatives declared their support for the work of the Independent Expert on SOGI, highlighted how the mandate's reports have been used to advocate for progress in their national contexts, and how important partnerships between stakeholders are to advance the protection of human rights and attainment of the Sustainable Development Goals adopted in 2015 pledging to “leave no one behind”. 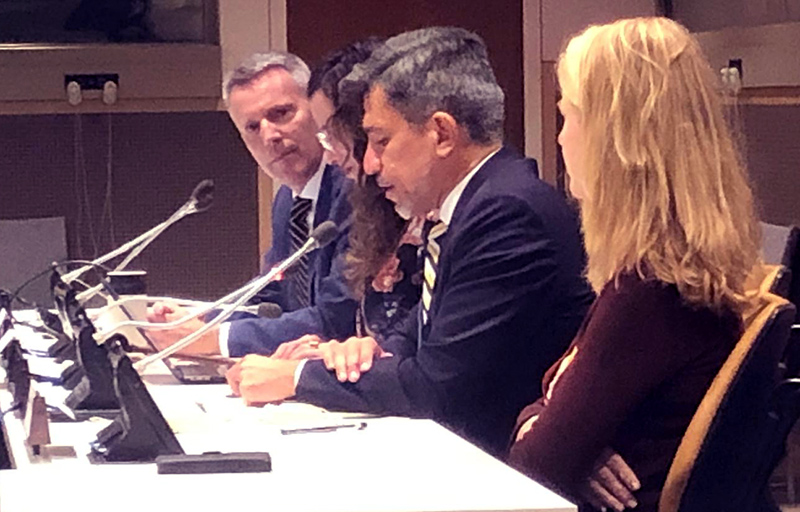 Almost 25 years ago, in 1995, the UN held its Fourth World Conference on Women in Beijing. This resulted in Member States adopting the Beijing Declaration and Platform for Action calling for gender equality and realization of human rights of women across the globe. In 2020 the UN is marking the anniversary of the Beijing Conference and Declaration, and reaffirming the commitments made 25 years ago, with a number of events. Preparation for the anniversary year has already kicked off - OutRight’s team took part in several regional meetings held in Geneva, Addis Ababa, Bangkok and Amman in October and November. The meetings featured UN officials and civil society, and aimed to address regional concerns and developments in gender equality over the last 25 years. OutRight was present to ensure that LBTIQ people are not forgotten in these debates, to reaffirm that gender inequalities affect everyone, and to strengthen alliances with other stakeholders who believe that gender equality efforts have to be inclusive of all women and trans people in order to be successful.

In December, OutRight held our flagship program, Advocacy Week. Since 2011, we have hosted over 400 LGBTI human rights defenders from around the world in New York for comprehensive  training on how to engage with the UN-system in New York, followed by a week of meetings with UN Member States and entities. At this year’s advocacy week Outright hosted 35 activists – or Envoys, as we call them – from 28 countries. 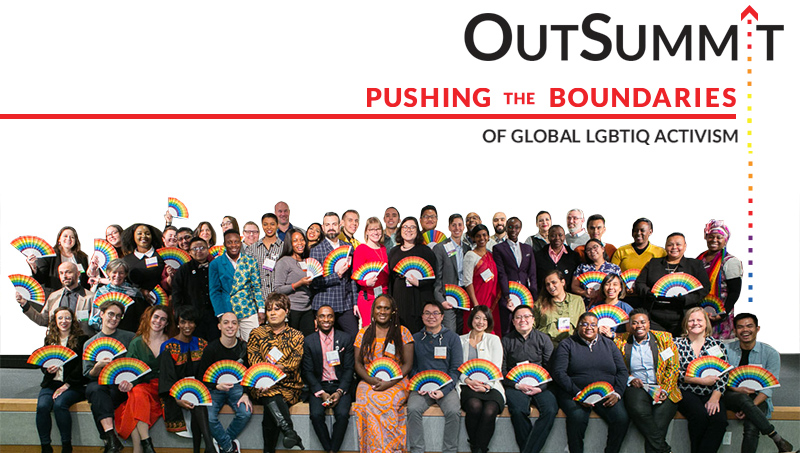 The program was held from December 4 to December 13, starting with a two day orientation on the UN, including introductions to the organization, the human rights mechanisms and systems, and entry points for advocacy on recognition and promotion of the human rights of LGBTIQ people. On December 6 OutRight held a donor pre-conference, enabling Envoys to meet directly with donors engaged with the LGBTIQ movement. On December 7 we held our annual international conference, OutSummit. 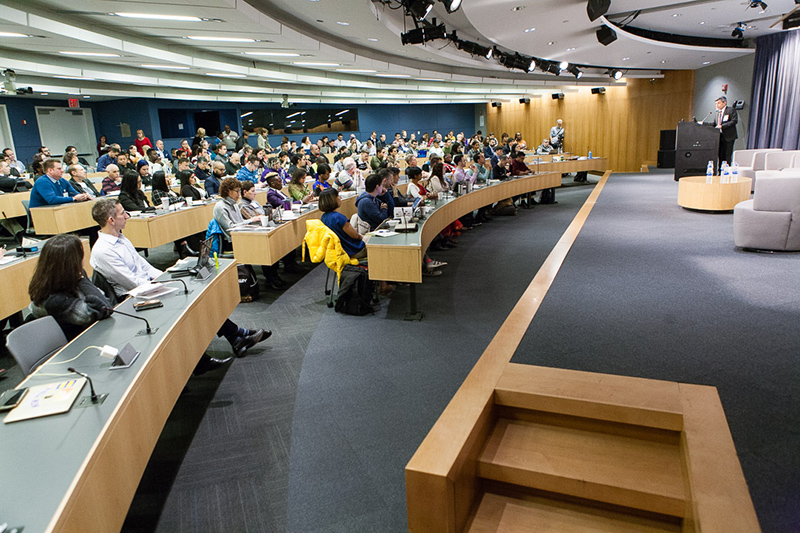 Between December 9 - 13 OutRight’s UN Program organized meetings with 59 UN Member State missions and UN entities. These meetings provided Envoys with a space to speak directly with government and UN officials, ensuring that those with the power to make change hear directly from LGBTIQ people about the concerns, issues and priorities facing them. Consequently also enabling Envoys to hold them accountable for ensuring that all humans have access to their human rights. Envoys met with Ambassadors and UN officials from all regions of the world, including from UN Member States such as South Africa, Argentina, Latvia, Finland, Spain, Singapore, Australia, and Thailand, and UN entities such as the Office of the High Commissioner for Human Rights, the United Nations Children's Fund, and the UN High Commissioner for Refugees. 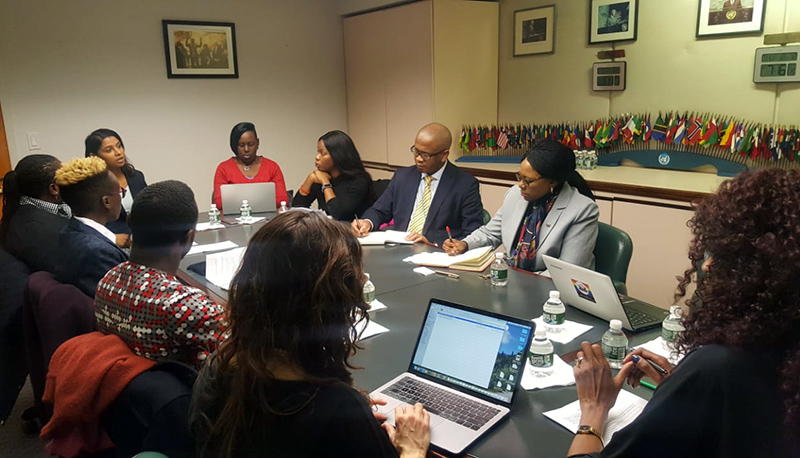 “Advocacy week has been an educational and priceless experience of movement building which has strengthened my capacity to better support the local LGBTQI movement and people through intersectional support by continuing to provide services, support and advocacy to vulnerable and marginalized LGBTQI community members.”
–Catherine Sealys, Raise Your Voice St. Lucia, St. Lucia
“Advocacy week is enriching because of the relationships which are fostered between LGBTIQ activists from diverse contexts, there’s a lot of learning and solidarity which is really encouraging and keeps us positive when we’re in the fight on the ground. It also allows us to bring our support to our allies here and interventions being made at the UN in defence of LGBTIQ rights globally. It’s important for them to hear from us that we’re with them as well as for us to know they’re with us.”
–Subha Wijesiriwardena, Gender & Sexuality, Sri Lanka
“Daunting as it is, Advocacy Week provides envoys with opportunities to strengthen their political prowess, enhance technical understandings and build relationships for purposes of navigating the United Nations. It is a space that facilitates and catalyzes the change we would like to see in the world as LGBTI people. It is a critical link in the process of sustaining LGBTI consciousness within the United Nations for global impact.”
–Liberty Matthyse, Gender DynamiX, South Africa

JANUARY
Regional Conference on Women in Latin America and the Caribbean: 27-31 January

MARCH
64th Session of the Commission on the Status of Women: 9-20 March