2017 has been a big year for the OutRight United Nations Program.

Over the past year, we have spearheaded New York-based advocacy initiatives at the Commission on the Status of Women, honored the International Day Against Homophobia and Transphobia, advocated throughout the High Level Political Forum on the Sustainable Development Goals, and organized at the recent UN General Assembly Session. We worked with the UN Independent Expert on the protection from violence on the basis of sexual orientation and gender identity (IE SOGI) in both Geneva and New York, helping to protect and support the mandate through its first reporting cycle at the Human Rights Council and more deeply at the UN General Assembly. As a member of the New York UN LGBTI Core Group, we worked closely with UN Member States to develop the group’s first formal work plan, mission statement and core objectives. We served on the Secretariat of the Yogyakarta Principles Plus 10, and we supported UN Women headquarters to establish its first LGBTI Civil Society Reference Group.

The culmination of our year was OutRight’s 8th annual Advocacy Week. The demand for the program is high: OutRight received 550 applications from activists wanting to participate. Spanning two weeks, OutRight trained and coordinated 40 LGBTI human rights defenders from 35 countries to access the New York-based UN system, harnessing the 193 member states and powerful UN agencies to support LGBTI rights nationally and regionally and making space among the activists for cross-regional movement-building. The activities coincided with International Human Rights Day, December 10th, to emphasize that LGBTI rights are human rights.

This edition of the UN New Yorker focuses on our work during the second half of the UN General Assembly Session, our annual Advocacy Week, and our annual global OutSummit conference. 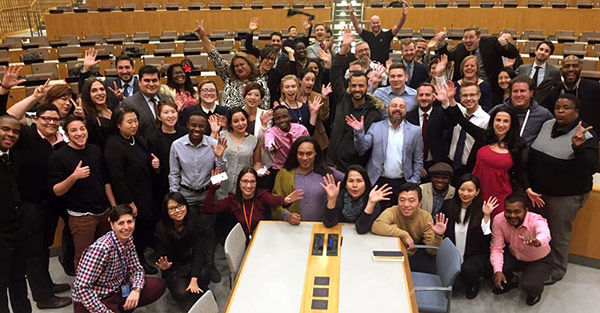 On October 26th, OutRight partnered with a coalition of progressive faith-based organizations in partnership with the UN LGBTI Core Group to host a dialogue entitled the “Ethics of Reciprocity” in the Delegates Dining Room at UN Headquarters. The event gathered interfaith religious leaders, civil society organizations, representatives from UN Member States and the UN system. The discussion featured remarks from The UN LGBTI Core Group, UN Special Procedures, and the Deputy High Commissioner on Human Rights and focused on how to address religiously motivated violence and discrimination against LGBTI people.

Serving within the Secretariat, OutRight supported ISHR and ARC International in their work leading the redevelopment of the 2006 Yogyakarta Principles. The Yogyakarta Principles Plus 10 (YP+10) include nine new principles and 112 additional State obligations that address developments in international human rights law in relation to sexual orientation, gender identity and expression and sex characteristics (SOGIE/SC). The principles will be a useful guide to the application of existing international human rights law to LGBTI people. Watch for our blog next week interviewing signatories to the principles and exploring where to go from here.

The UN LGBTI Core Group held a High-Level breakfast on October 26th hosted by the Netherlands Mission. Ambassadors from the UN LGBTI Core Group Member States were in attendance as well as representatives from Member States who supportive of international LGBTI human rights albeit not in the Core Group. Professor Muntarbhorn provided an update on the progress of the mandate and reflected on his experience in the mandate.

On October 26th, OutRight convened a civil society briefing in New York with Professor Vitit Muntarbhorn, the Independent Expert on protection against violence and discrimination based on sexual orientation and gender identity (IE SOGI). Prof. Muntarbhorn engaged in dialogue with representatives from 10 non-government organizations. He discussed his report to the General Assembly.

On October 27th, Professor Muntarbhorn presented the first-ever report of the IE SOGI to the Third Committee of the UN General Assembly. OutRight worked with UN Member States to advocate for cross-regional public statements of support for the work of the IE SOGI and the mandate generally. A full analysis of his presentation can be found here.

In September Professor Muntarbhorn announced he would resign from the IE position for health reasons. OutRight appreciated his enormous contributions and actively encouraged a smooth transition to his successor. OutRight now looks forward to working with Victor Madrigal-Borloz of Costa Rica, who was appointed to the position in December.

OutRight monitored a number of resolutions over the course of this UN General Assembly session. Only one resolution (The Olympic Truce Resolution; see below) contained language that indirectly referenced sexual orientation and none specifically mentioned gender identity, gender expression or sex characteristics. Some general developments in other resolutions have implications for access to comprehensive sexuality education (CSE) and the human rights of LGBTI children more generally.

The Olympic Truce Resolution is a UN General Assembly Plenary Resolution adopted every two years prior to each Olympic Games. Its aim is to negotiate an international peace agreement for the duration of the Games allowing athletes to compete in safety. The Resolution was attacked by a coalition of countries led by Russia and Egypt in an attempt to strip previously agreed language in reference to Principle 6 of the Olympic Charter from the text. Principle 6 provides protection for athletes from discrimination based on sexual orientation. In partnership with supportive UN Member States and Athlete Ally, OutRight worked to successfully defend the integrity of the resolution. The resolution passed by consensus with explicit reference to Principle 6. You can read more here.

Rights of the Child Resolution

This biannual resolution was focused on violence against children. Historically co-led by the European Union and the Group of Latin American and Caribbean States (GRULAC), in this session the Caribbean Group (CARICOM) broke from Latin American Group (LAC) during the informal negotiation over differing positions on the issues of corporal punishment and CSE. Canada attempted to insert language on gender-diverse children in OP27 (eventual OP29 in the final text). The proposed compromise language of “all children” instead of “girls and boys” did not succeed. The final paragraph read:

Cross Cutting Themes and Trends of the Resolutions

With the exception of Canada's attempts to push for gender diversity within the Rights of Child Resolution, resolution negotiations during this UN General Assembly session were marked by a distinct shift from normative progress to defending previous progress on human rights more broadly against growing hostility and pushback. Notably, CARICOM adopted a hard-line position exemplified by its break from GRULAC during the negotiations for the Rights of the Child Resolution. The session also saw two surprise successful hostile amendments tabled by Saint Lucia aimed at weakening previous progress made on the human rights of children by placing caveats in the Rights of the Child and Girl Child resolutions specifying “appropriate direction and guidance from parents and legal guardians” around access to CSE. Conversely, South Africa emerged as a stronger dissenting voice with the Africa Group on the same issue - forcing Egypt to acknowledge a break in consensus when speaking on behalf of the African Group stating that ‘all African countries except South Africa’ are opposed to CSE on the basis that “African culture respects parental rights”.

A key moment in the OutRight calendar is our annual Advocacy Week. Since 2011, OutRight has hosted LGBTI activists from around the world in New York for a week of meetings with governments’ missions to the UN and other UN representatives at UN headquarters. The demand for the program is high: OutRight received 550 applications from activists wanting to participate. This year, Advocacy Week included 40 LGBTI activists from 35 countries.

From November 27th to December 9th, activists came together to participate in five activities: OutRight’s safety and security training; a training and strategy meeting on advocacy; cross-regional briefings; a press conference; and five days of advocacy meetings with government officials, the UN Secretariat, and UN Agencies.

Over the course of the week, OutRight organized meetings with 38 governments and UN Agencies. These meetings provided a platform for activists to raise their concerns with their own governments and with other global leaders to hold them accountable for LGBTI rights at domestic and international level. Advocates met with Ambassadors from Belize, South Africa, the Netherlands, the Philippines, Costa Rica, the United Kingdom, Australia, Albania, Samoa, The European Union, Argentina, Nepal and Thailand, and UN diplomats from the Caribbean, the Middle East and North Africa, Eastern Europe, Asia and the Pacific, and Latin America.

OutRight asked some of the participants about their experiences over Advocacy Week and what they hoped to achieve. 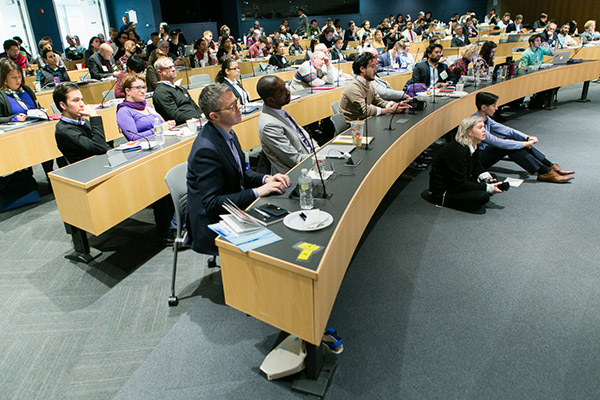 OutSummit 2017 attracted a record 250 speakers, activists, and participants - the largest to-date! Forty-five speakers, many of whom were Advocacy Week participants, spoke throughout the conference program and shared their unique reflections, insight and experiences. 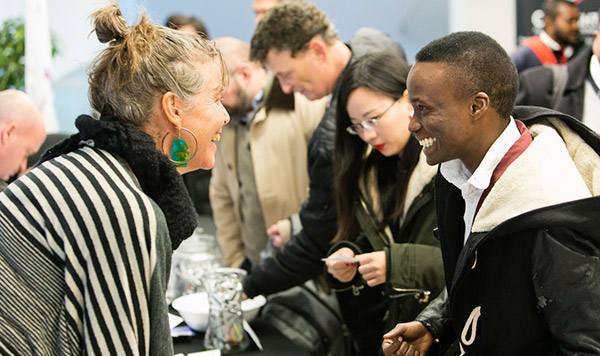 The themes of movement history and movement-building opened and closed the conference in flanking plenaries: LGBTIQ Histories: Stories of Resistance and The Future of LGBTIQ Rights: Intersectional, Inclusive, and Courageous. 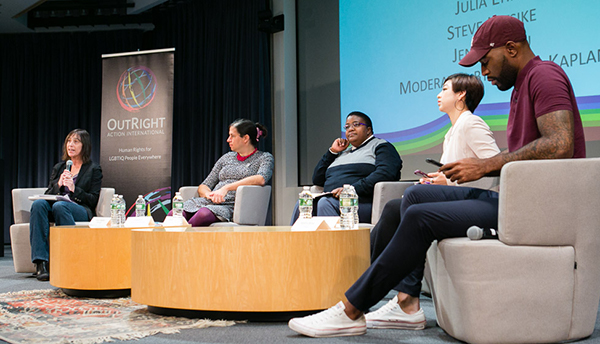 Deeper engagement across a range of specific regional and themes were explored in six workshops throughout the day.

OutSummit showcased two keynote speakers - LGBTI ally Joy Belmonte, Vice Mayor of Quezon City – the largest city in the Philippines – and an inspiring activist working for LGBTI human rights in Egypt [name withheld]. The Vice Mayor articulated a message of hope and resilience and spoke to the central role of allies to LGBTI movement building reflecting that,

The second keynote speaker closed the event by touching on a somber issue - the intensified government crackdown on LGBTIQ persons in Egypt. Receiving two standing ovations, the speaker asked that international pressure on Egypt must continue. The activist ended with a message of hope, “We all know that progress in LGBTQI activism often comes in small increments. Sometimes two steps forward, one-step back but together we can fight better … together we will find the strength and wisdom to change plans and tactics but never quit.”

OutRight Executive Director, Jessica Stern, commented on the day, saying, “OutSummit fortified my belief in a truly global LGBTIQ movement, one that is resilient, powerful, and courageous. As this next year unfolds, I hope the lessons learned and relationships cultivated today will help us all to push forward and mobilize for a more equal and just world for LGBTIQ people everywhere.” 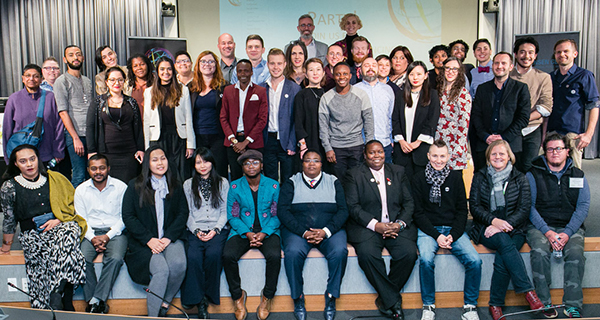