The United Nations (UN) Program leads OutRight’s international advocacy work through participation in intergovernmental mechanisms, with a particular focus on the New York-based UN Headquarters. The Program works with diplomatic missions, participates in relevant meetings at the UN, works with UN mechanisms, and monitors and reports on developments relevant to the organization's work in this context. The UN Program also coordinates with civil society globally to hold governments accountable and to take action to address human rights issues facing LGBTI communities at the UN and in other inter-governmental systems.

UN Program Interns will work with OutRight staff as an integral part of the team by: 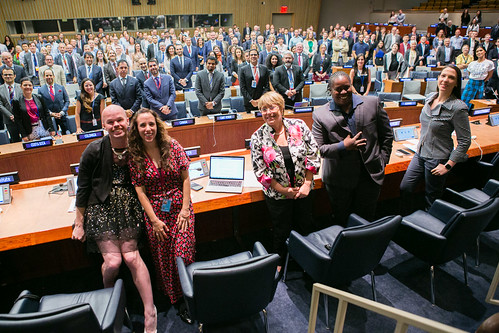 Engaging with the team on a variety of issues faced by LGBTI individuals around the world, and building reports and conducting research on these matters.

Ideal candidates will be graduate students, or law students with a demonstrated academic and/or extracurricular interest in social justice, human rights, and/or LGBT issues with strong writing and communication abilities.

What former interns are saying

“As a United Nations intern, I had widespread exposure to the workings of the UN and its interaction with NGOs from all over the world. As a workspace, OutRight acted as a catalyst in honing my research skills and gave me space to pursue a project of interest. As an organization, it genuinely celebrates diversity and individuality.The coolest OutRight team makes it a fun place to work.” - Preetika Sharma, Fulbright doctoral Fellow, NYU