My same experiences of disorientation and erratic wandering around the campus to search in vain for workshops were repeated to me in conversations and occasional meetings with activists during the night and morning. There were many who decided to transfer their activities to their own hotels. Many of us missed “The Q Spot,” the Nairobi tent that hosted the very full LGBT agenda. However, already in the second and final day of workshops the initial discomfort was gone and everyone knew, more or less what to expect and where they could find the space or the group they wanted to meet. This did not encourage the expected interaction among the various social movements, but at least appointments scheduled the day before allowed the continuity of dialogues.

This is what also happened in the tent occupied by the Lesbian and Gay Equality Project. Gradually the place was filled with attendees who came to the meeting scheduled the day before. Many had been invited by others or somehow had received the information since last night and this morning.

The activity scheduled today at the tent was a round-table discussion on, “Visions of Diversity within Africa: The role of progressive organizations/activists in the struggles against homophobia.” Through this discussion, the organizers (the Lesbian and Gay Equality Project, LGBT South-South Dialogue, Fahamu Networks for Social Justice, Democratic Left Front and the African People’s Dialogue) immersed us in a dialogue with anti-capitalists, leftists, and progressives committed to the WSF process to deepen perspectives on their proposals and alternatives for another world that includes the struggles faced by LGBTI people, particularly in Africa. With this event, organizers sought to bring activists from a broad base of struggles in solidarity and unity, to strengthen the strategies for multi-dimensional approaches against oppression, exclusion, and discrimination.

The discussion brought forward questions such as:

Many of these questions remained open but the discussion brought all of us through into a network of strategic proposals, practical examples, and visions that are worth being considered and enacted.

Today has been the last day of workshops. Tomorrow the Thematic Assemblies will begin. 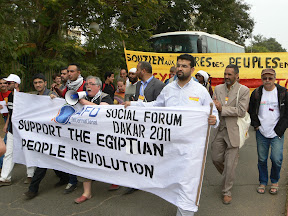