Like you, we at OutRight have been shaken by, and are closely following, news from Afghanistan.

There is no doubt that LGBTIQ people, women, and anyone who does not subscribe to the religious fundamentalist beliefs enforced by the Taliban are and will be a target of the regime. News have already reported of women and girls killed, human rights defenders and journalists under attack, Taliban leaders pledging to stone LGBTIQ people, and other atrocities. Media have quoted a Taliban judge stating:

“For homosexuals, there can only be two punishments: either stoning, or he must stand behind a wall that will fall down on him. The wall must be 2.5 to 3 metres high.”

OutRight has joined other civil society organizations in calling on governments to grant asylum to LGBTIQ people and others targeted by the Taliban. We support the work of partner organizations working to help LGBTIQ people flee persecution and violence. However, the reality for the vast majority of people in Afghanistan - including vulnerable LGBTIQ people, women and girls - is that they will not be able to leave.

Afghanistan is one of 30 countries OutRight identified as not having any LGBTIQ organizations in our 2018 Right to Register report, so practical support on the ground is also limited. We are in touch with a few activists who have gone underground. We will remain in contact with them and share information and calls to action whenever possible, with their safety as our top priority.

OutRight is also embarking on a project to document the realities and persecution facing LGBTIQ Afghans at this time. With over 30 years of experience we know that without documentation, LGBTIQ people can too easily be left behind by humanitarian responses and actions from governments and other stakeholders.

OutRight’s documentation of ISIS crimes in Syria and Iraq in 2014-2016 led to the first ever UN Security Council briefing on violence against LGBTIQ people. Our forthcoming briefing will aim to incite action by informing civil society, state and private sector actors about the situation and provide recommendations for safeguarding the human rights of LGBTIQ people, even in times of extreme crisis.

In hope and solidarity, 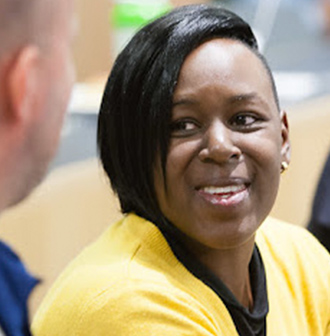 Yvonne is OutRight’s Africa Program Officer coordinating OutRight’s project tackling conversion practices in South Africa, Nigeria and Kenya. Yvonne is a lawyer, human rights defender and researcher. She has worked to safeguard human rights defenders, to strengthen the rule of law in Kenya, and took part in the campaign to repeal sections 162 and 165 of the Penal Code of Kenya which criminalize same-sex relations.

Yvonne is based in Kenya. Outside of work she likes to read fictional novels and spend time outdoors either running, hiking or biking. And, most importantly, spending quality time with her family.

Solidarity is a sense of awareness of a common purpose, a feeling of shared interests and objectives, which creates a psychological sense of unity among a group of people. Solidarity can bring together people from across the globe, across borders and cultural boundaries, and inspire individuals to take actions for the benefit of the feeling of shared purpose.