When people come to the United States to escape violence, abuse and corruption in their own countries, some may have unrealistic or idealistic views of the country they seek refuge in. Others have a more realistic sense of what they may face. In either case, nothing prepares people for the torment and trauma they might experience if detained in ICE detention centers, least of all LGBTIQ individuals.

For LGBTIQ individuals seeking asylum in the US, one of the most common situations is for them to go to the border, present themselves to border patrol agents and request asylum. At which time, the individual will immediately be sent to an Immigration and Customs Enforcement (ICE) detention center, usually in Arizona, either Eloy or Florence. Individuals are kept in these centers until they have a hearing in relation to their asylum request, which could take years.

There are many stories about the horrific treatment of LGBTIQ people, and especially transgender individuals, in these centers. The Transgender Law Center and others have researched the issue. The most common occurrence is for authorities not to recognize the gender identity of trans individuals.

This means that trans women are housed with men and trans men are housed with women. Trans women are forced to sleep, shower and use the restroom with men in an environment with little to no privacy for extended periods of time. Usually any attempt to create privacy, such as using a curtain when showering, will result in discipline by ICE agents. Marichuy Leal Gamino, a trans asylum seeker, recounts, “transgender women would try to put up a curtain when they showered so the guards and other men wouldn’t be able to see them, but they were written up for doing so.”

Trans women face harassment from those employed by ICE, such as abusive language and groping. More severe forms of humiliation and violence have also been documented, such as being strip-searched publicly and sexually assaulted by those who are supposed to be protecting them. 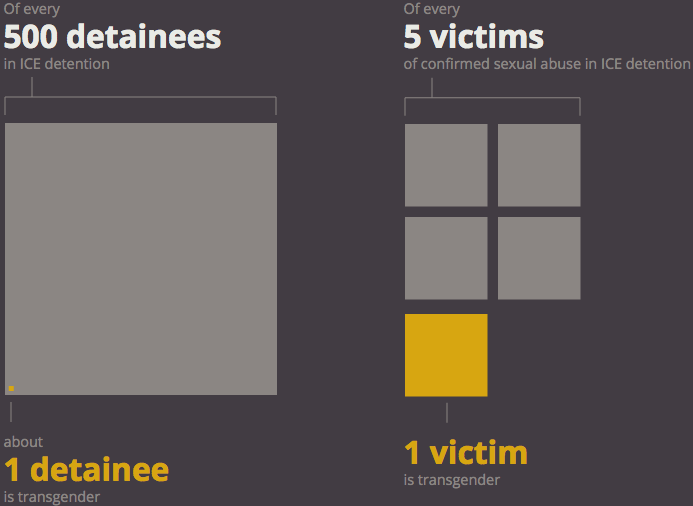 Trans women are forced to live with men,  usually the very men they are attempting to flee, in extremely close quarters with little or no privacy. This can lead to cases of sexual abuse. Although, trans women only account for one in every five hundred people in detention centers, they make up one in every five substantiated complaints of sexual assault.

ICE has attempted to implement strategies to “protect” LGBTIQ individuals. One example is the introduction of LGBTIQ “pods” in the detention center in Santa Ana City Jail in California. The “pods” are a separate housing area for LGBTIQ individuals. But availability is limited and not offered unless there is no other option for the individual.

Many detention centers are run by for-profit companies. In 2009, a policy was implemented that involved the Department of Homeland Security (DHS) issuing a bed quota of 34,000 per day. Although ICE argued that this simply means they are obliged to maintain 34,000 beds for use by the DHS and that it is not in fact a quota, it is still the case that funding for the center depend on detaining large numbers of individuals on a daily basis. Concerns have been raised that people who could be released, as they are not a threat to society or a flight risk, are being kept indefinitely in detention centers. The Department of Homeland Security use automated Risk Classification Assessments (RCA) to determine who should and should not be released. However, the recommendations are not always followed with ICE usually detaining two in every three LGBTIQ individuals who are recommended for release.

There are a number of ways this issue, within ICE detention centers, could be tackled. In June, 2015, ICE released a document entitled Transgender Care Memorandum which details how officials should identify trans immigrants in processing stages, train officers in relation to trans issues and deal with the possibility of transfers. Organizations such as United We Dream, would like to see these policies implemented more effectively as well as other measures in order to protect LGBTI individuals. The Human Rights Campaign suggests that Congress promote secure alternatives to detention centers especially for vulnerable LGBTI community members who are not considered a risk to society.

The National Center for Transgender Equality released a guide for advocates to end abuse and combat imprisonment of LGBTIQ prisoners.  In this guide, among other recommendations, they suggest transgender individuals be asked to give their input on what they feel would be the safest option for them in prison and detention center settings.

Although the U.S. system for asylum seekers and refugees is not ideal, there seem to be no examples of situations which are. Due to the explosion of refugees and asylum seekers in Europe in the last year, LGBTIQ individuals are being forgotten there. Reception centers in Europe rarely have private sleeping or restroom facilities. This means that when an individual's sexual or gender identity is exposed, they become a target for verbal, physical and sexual abuse by others in the centers. In most European countries, reception centers tend to be located in remote towns or villages which makes it near impossible to escape the torment LGBTIQ individuals face in centers.

In some instances in Germany, civil society organizations have come to the rescue to rehouse LGBTIQ asylum seekers in safer conditions. There has been talk of the possibility of creating an exclusively LGBTIQ center, however, this has yet to happen. As a result of this potential for abuse and without other options, LGBTIQ individuals tend to keep their sexual and gender identity to themselves.