OutRight Action International partnered with EnGendeRights (EGR) in the Philippines and Women and Media Collective (WMC) in Sri Lanka to address barriers to domestic violence protections for lesbian, gay, bisexual and trans (LGBT) persons. Family violence is the primary source of violence for lesbians, bisexual women and trans (LBT) people in Asia because of family norms, religious beliefs, and cultural myths and stereotypes about homosexuality, lesbianism, and gender non-conformity.

A five-country report on violence against LBT people in Asia published by OutRight in 2014 says that the centrality of family violence in Asia is linked to its role as “enforcer of social norms, standards of respectability, morality, and religious teachings.” This report also showed that LBT people experience high levels of intimate partner violence, where perpetrators tend to be same sex partners, dating partners, and heterosexual male partners of bisexual women or lesbians coerced into heterosexual marriage. To avoid exposing their family, their relationship, and themselves to unwanted negative attention and homophobic or transphobic reactions, LBT victims-survivors of household and partner violence tend to avoid seeking help from social services, counselors, police, or legal services. This is the case in the Philippines, where being lesbian or gay is not a crime, as well as in Sri Lanka, where homosexuality and lesbianism are criminalized, adding barriers to accessing assistance and protections for violence.

Read our final evaluation to learn more about project outcomes, review their relevance, effectiveness and impacts, and assess the project’s sustainability, including replicability. Click to download »

Quezon City was selected as the pilot city in the Philippines to launch the project because it is the largest and most populated city in Metro Manila. It is also the country’s first city to have anti-discrimination legislation (the Gender Fair Ordinance) with specific rules and regulations for implementation, including guidelines to address LGBTI concerns.

Led by OutRight’s staff member based in Quezon City, Ging Cristobal, and Claire Padilla of EnGender Rights, a Philippines women’s rights and anti-discrimination organization, the project has resulted in the presence of 187 LGBTI friendly service providers for the LGBTI community to access in over half of the city’s municipalities across six districts. Rainbow stickers are displayed outside municipal offices to signal availability of LGBTI sensitive services. 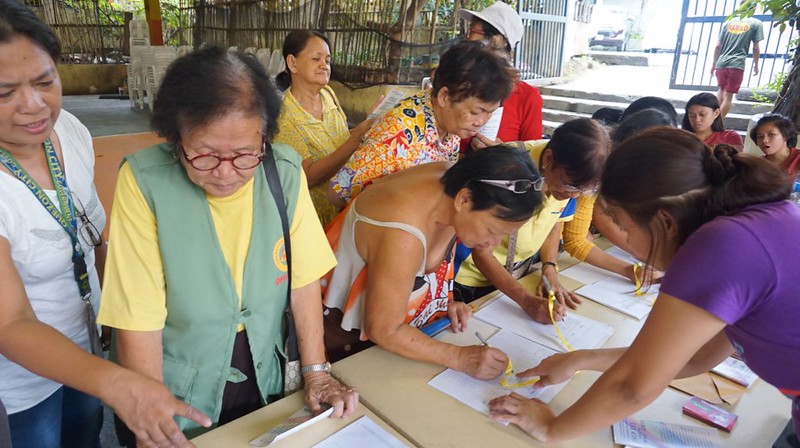 Community forums were convened at the grassroots level to publicize the project and start discussions about sexual orientation, gender variance and family violence. The audience included parents, educators and police officers.

“Sometimes people discriminate because they are misinformed. My mantra is, you cannot only educate the mind but also change the heart. We have to challenge everyone to go beyond their comfort zones.”
~ Ging Cristobal, Project Coordinator

Trained trainers are taking the lead in implementing the Protocol and training their colleagues to respect LGBTI people, respond to LGBTI concerns, build trust and create LGBTI-friendly environments.

The Vice Mayor of Quezon City, Joy Belmonte, has been an influential champion of the project. Her presence at community forums and public launch of the project has increased visibility and legitimacy among service providers and first responders of family violence and partner violence. Because of her high level of involvement, OutRight invited Belmonte to speak at 2017 OutSummit on how to promote bottom-up acceptance for non-discrimination at local government level and via the smallest administrative unit in the country (the barangay or municipal village).

OutRight is working to resource more groups in the Philippines to replicate the Quezon City pilot project.

In 2014, advocates for LBT persons in Sri Lanka reported, that most violence against LBT people “occurs when immediate and extended family members discover the LBT person’s sexual orientation or gender identity.” A staggeringly high number of LBT people interviewed for the Sri Lanka study reported wide-ranging impact on their mental health because of emotional, physical and sexual violence linked to their sexual orientation, gender identity and gender expression.

The 2005 Sri Lankan Prevention of Domestic Violence (DV) Act is gender neutral and covers married, legally separated and cohabiting couples. Because of this, it can technically be used by LBT persons. However, Sri Lanka also criminalizes same sex relations between consenting adults under Section 365A of the Penal Code and criminalizes gender non-conformity under the Cheating by Personation Act. These laws effectively bar access to LBT seeking protections under the DV Act for fear of being arrested for being LGBT.

There’s also fear of stigma, humiliation and rejection from community, friends, or service providers, which prevents LBT individuals from seeking therapeutic counseling to deal with parental violence or partner violence.

In the context of the many types of violence contributing to mental health vulnerabilities of LBT persons and in the absence of standardized approaches to counseling and psychological interventions in Sri Lanka, OutRight’s partner, Women and Media Collective (WMC), in close consultation with members of the LBT community and LBT-friendly mental health professionals, produced the first ever Counselors’ Manual for trained counseling professionals. It provides guidelines and procedures on how to give systematic, consistent LBT-sensitive counseling and follow-up support for LBT persons.

“The Manual has become an entry-point for mental health engagement with LBT issues not only in Sri Lanka but also in other countries where Sri Lankans live.”
~ Grace Poore, Regional Program Coordinator for Asia and Pacific Islands

Twenty pre-identified counselors from national service-provider NGOs received trainings where they could openly discuss sexual orientation, gender, and violence from feminist perspectives. They will now go on to train counselor colleagues in eight other Sri Lankan cities who encounter family violence and domestic violence complaints.

At the grassroots level, LBT-supportive women leaders also received trainings on how to use their position as “village watchers” and women’s support system in the Free Trade Zone workplace to provide first-responder support and referrals for LBT individuals in distress.

Despite the less friendly environment for LGBT communities in Sri Lanka and deteriorating conditions for women generally, WMC launched a two-phase social media campaign using YouTube, Facebook and Twitter platforms to start online public conversations about LBT issues, the understanding of family, and the precursors to family violence. Interview with Subha Wijesiriwardena from Women and Media Collective on our partnership and the social media campaign »