Greetings from the Caribbean Women and Sexual Diversity Conference 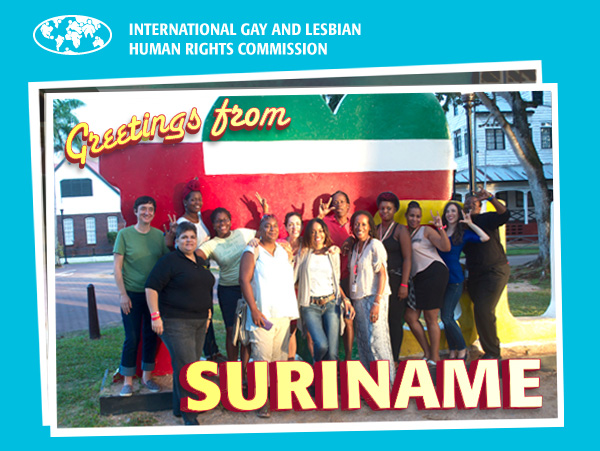 I just returned from an extraordinary training in Suriname with dozens of brilliant LGBT activists who are working to increase safety and visibility across the Caribbean. I wanted to share with you the inspiring words of a 22-year-old activist, Paige Jennan Andrew, who wrote about the event: “Empowering and extremely fulfilling are the words that come to mind.”

I was particularly moved by her response to joining her first pride march. “It was,” she wrote, “without a doubt the most liberating experience I have ever had.” But don’t take my word for it. Read Paige’s observations for yourself.

This was the second year that we at the International Gay and Lesbian Human Rights Commission supported the Caribbean Women and Sexual Diversity Conference, both as a donor helping to make the conference possible and by leading training workshops. The event was organized by United and Strong (St. Lucia) and hosted by Women’s Way Foundation (Suriname).

Maria Mercedes Gomez, who runs the IGLHRC program in the region, said, “I believe that it is incredibly important to support LGBT communities in the Caribbean. It is the only region in the Western hemisphere that still has sodomy laws on the books, and not surprisingly, rates of discrimination and violence remain alarmingly high.”

In Suriname, I saw first-hand the results of IGLHRC’s joint media project with United and Strong, in which we train activists to monitor tabloid journalism and build partnerships with local journalists. The goal is to move away from sensationalized, harmful reporting on LGBT rights in favor of objective, accurate coverage.

By helping activists gain know-how and expertise, IGLHRC is providing the tools they will need to have impact.