As I enter my last month at OutRight, I wanted to take a moment and write to you, our friends and supporters of many years. As many of you know, I have been selected by the Biden Administration to serve in the role of Special Envoy for International LGBTQI+ Rights, the most senior position in US foreign policy dedicated to LGBTIQ rights. I'm thrilled to continue my work for LGBTIQ rights in this new capacity, but I am sad to be leaving OutRight.

Serving as OutRight’s executive director has been the honor of a lifetime. I can think of no organization that works with more integrity, more skillful staff, more motivated board members, more valued partners, or greater impact. After 11 years with OutRight, leaving is bittersweet, but I know that the organization could not be stronger.

Upon my departure, Deputy Director Maria Sjödin will take on the role of Acting Executive Director while the Board of Directors finalizes its vision for succession planning. Maria has been at OutRight for over 7 years. Under her leadership of the Development and Communications teams, we have radically grown and diversified our funding and exponentially increased OutRight’s visibility in the media. Prior to joining OutRight, Maria served as the Executive Director of Sweden’s largest LGBTIQ organization, RFSL, overseeing the launch of its international program and spearheading efforts which resulted in marriage equality legislation and a ban on the sterilization of trans people as a prerequisite for legal gender recognition in Sweden. With her experience and knowledge of OutRight, I can think of no better hands to leave the organization in.

Thank you for your ongoing support for LGBTIQ rights around the world and ongoing relationship with OutRight. I am happy to join the network of supporters and friends of OutRight, and I look forward to crossing paths again. 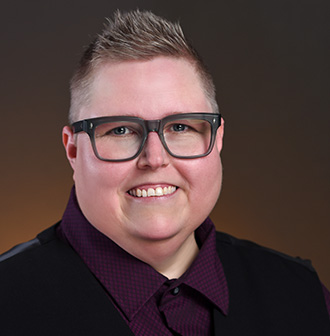 Maria is OutRight’s Deputy Executive Director, responsible for OutRight’s Development and Communications teams. Under her leadership OutRight has diversified and grown its funding, tripled its visibility in the media, and overall become a stronger, more prominent organization.

Originally from Sweden, Maria moved to New York 7 years ago to join OutRight and now lives in Brooklyn with her fiancé Petrina. They identify as a non-binary lesbian and use they or she pronouns.

Maria is a big fan of Bruce Springsteen and can’t wait to see him perform in his home state New Jersey when big concerts can happen again.

Earlier this month it was International Non-Binary People’s Day. Non-binary is a gender identity which does not correspond to what is typically defined as male or female. Non-binary people can choose to use pronouns such as they/them, or ze/zey, or local equivalents.