OutSummit, our annual global convening for the human rights of LGBTIQ people, organized together with CUNY School of Law is just around the corner. Like last year, we are hosting it online, and hope that wherever you are, you will join us! Sessions are tailored to work across different time zones, and will take place over three days - December 8-10.

I'm pleased to announce that our second keynote speaker will be award-winning author and activist Masha Gessen (they/them). Masha Gessen is a staff writer at The New Yorker and the author of 12 books of nonfiction. Gessen became a journalist in the 1980s, working in the gay and lesbian press in the United States. In the early 1990s, they moved back to their native Moscow and stayed for more than 20 years, until the Kremlin's anti-LGBTIQ campaign compelled them to leave and return to New York City. They have lived there since 2014. Masha also played a key role in founding OutRight together with Julie Dorf, in particular pioneering the organization's work in Russia in the early 90's.

In addition to keynote speakers and a plenary on “LGBTIQ Lives in Crisis: Surviving Political and Natural Disasters”, over 30 sessions with speakers from across the world will cover topics ranging from tackling the backlash, eliminating sexual orientation and gender identity change efforts, and engaging diverse allies in the fight for LGBTIQ equality.

Have a look at session and speaker information on the OutSummit website and register to take part! If you are an activist, student or journalist you can register for free.

I look forward to seeing you there!

Many thanks to OutSummit supporters who make the event possible: 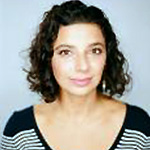 Neela Ghoshal (any pronouns) is OutRight's new Director of Law and Policy. In this role, Neela oversees OutRight's research, United Nations and Caribbean program teams. Neela joins OutRight after 14 years at Human Rights Watch, where they started as a Researcher in the Africa Division focused on Burundi and Kenya, later becoming Senior Researcher in the LGBT Rights Program, and departing as its Associate LGBT Rights Program Director.

Neela holds a bachelor's in social justice studies from the University of Michigan and a master's in international relations from Yale University, and speaks English, Spanish, French and Kiswahili. They enjoy growing vegetables, cooking, singing Hamilton at karaoke, and writing about feminist parenting.

This term refers to people who naturally have sex characteristics – biological traits, such as hormonal levels, chromosome patterns, gonads or genitalia – that do not match what is typically identified as male or female. There are many different intersex variations. Being intersex is a naturally occurring trait in humans. Intersex people can have different sexual orientations, gender identities and expressions. November 8 was Intersex Day of Remembrance, marking solidarity with the intersex community and raise awareness about the challenges LGBTIQ people face, including medically unnecessary and invasive so-called “normalizing surgeries”, lack of recognition in official documents, and many others.

Spread the word about OutSummit to your networks so that ever more people are able to join us in the fight for human rights for LGBTIQ people everywhere!