Activists on the Frontlines: Chesterfield Samba of Zimbabwe

Human rights groups, he says, must be “strong, refuse to capitulate but instead espouse a culture of hope.”
Contributed by:
Suzanne Trimel - Director of Communications for OutRight 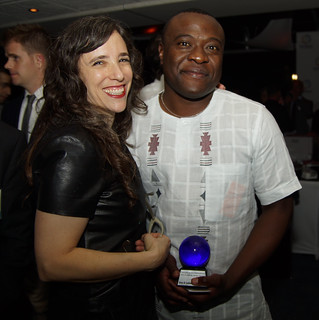 On September 28, OutRight awarded the Felipa de Souza award to GALZ, Gays and Lesbians of Zimbabwe, a 25-year-old organization. At OutRight’s Celebration of Courage gala in New York City, the award was presented to Chesterfield Samba, director of GALZ. Honoring LGBTIQ global activists, the award was named for Felipa de Souza, who endured persecution and brutality after declaring her intimacy with a woman during a 16th Century inquisition trial in Brazil.

Samba, who has led GALZ for a decade, answered questions about his work and activism in a discussion with OutRight Director of Communications Suzanne Trimel:

Q.: Over its 25 year history what do you see as GALZ's major achievements?

A: GALZ has made great strides in pushing for the tolerance and appreciation of sexual differences in society. Arguably, GALZ’s greatest success has been its ability to raise the profile of LGBTI people not only on the national agenda of Zimbabwe but throughout Africa. Ironically it has been the rhetorical homophobic outbursts of President Mugabe and other government and religious leaders that have achieved this. The publicity generated by President Mugabe’s first vitriolic attack on lesbian and gay people during his opening speech to the Book Fair in 1995 resulted in more publicity than GALZ could ever have dreamed of or paid for.

Q: What are your greatest challenges and what are some of your long-term goals?

A: The state is an active sponsor of homophobia in Zimbabwe. Government officials, religious and traditional leaders have given their voice in support of the exclusion of LGBTI people from national processes. Due to homophobia, intimidation of LGBTI people is taking place in public spaces, in educational institutions as well as in places providing support to LGBTI people. GALZ itself has experienced more human rights violations in the form of unwarranted arrests, physical assaults, harassment and raids on our offices. Some of these incidents go unreported, limiting opportunities for redress. Such victimization is a result of the work GALZ does to promote the rights and interests of LGBTI people in general.

We seek to challenge discrimination against LGBTI people through activities that enable LGBTI’s to effectively counter-act homophobic hatred and violence promoted by homophobic religious, traditional and political rhetoric and practices. We hope to integrate LGBTI issues into citizenship and human rights programs and ultimately improve visibility, recognition and acceptance of LGBTI people.

Q: What gives you hope for the future?

A: There is no magic recipe for success when it comes to human rights campaigning and what might work for an organization like GALZ might not necessary be appropriate in another cultural context. However, loyalty and dedication by a few are probably the most important qualities that any activist movement can have and these people need always to have a positive attitude: acting the victim simply makes us all look pathetic. Small and often unforeseen victories often turn out to be as important as any major breakthrough and just hanging in there and waiting for a chance to seize the opportunity is a valid enough reason to exist.

The government appears invincible and no one inside or outside Zimbabwe seems able to hold it to account. At present, it appears there is little else that we can do but sit tight; hope for the best and when the worst happens make a plan. But human rights organizations like GALZ cannot become dormant; they are responsible for bringing about change for the better; that is why they exist.

Q: What keeps you going?

A: The small wins of GALZ and affirmations of LGBTI people in Zimbabwe inspire me to hold on and stay the course. Human rights organizations should never remain inert even in the face of apparent demoralising failure to achieve anything positive. They need to be strong, refuse to capitulate but instead espouse a culture of hope. It’s more about standing for what is right and refusing to let go of their values and principles of their work

Q: What can people in other countries can do to help you?

A: Solidarity is important and there are several ways to go about this with the underlying principle being communicating with groups to find out about the most appropriate forms of support as and when issues arise. It is tales of tragedy and disaster that seem to attract international attention and accompanying resources. We need to support success stories as well, self-motivation and self-reliance and encourage groups to recognize the value of cooperating with other LGBT groups.

Q: On a personal level, what inspired your activism?

A: I do not want to see any young person troubled by an irrelevant characteristic such as being who they are- gay, lesbian, bisexual or trans. Working on LGBTI rights in Zimbabwe is not about being brave but doing what is right.