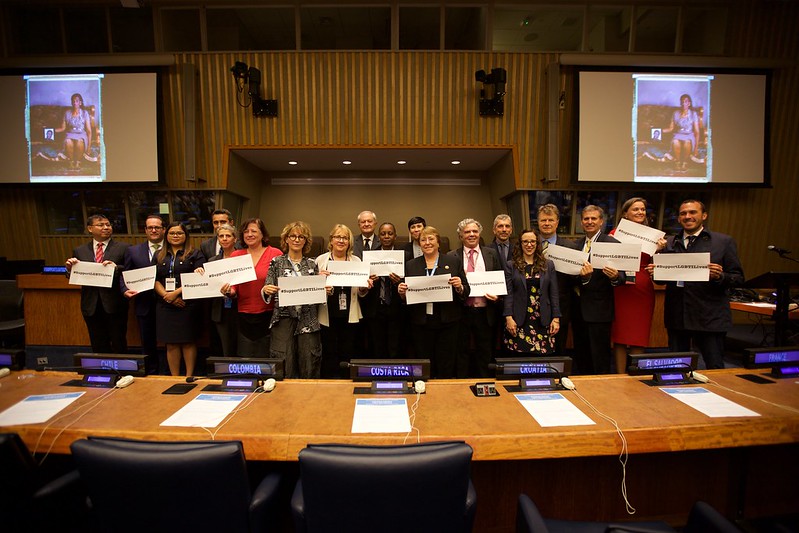 OutRight and the UN LGBTI Core Group hosted a historic 6th annual LGBTI Human Rights event On September 26th at UNGA Leaders’ Week in the UN Headquarters. The high level side event focused on raising awareness of and ending violence and discrimination against LGBTI individuals. The event was historic because we saw the first speech by the Secretary-General specifically on LGBTI rights in his tenure. [ video can be viewed here ]

Executive Director of OutRight Action International, Jessica Stern, opened the event, introducing OutRight Action International, thanking the UN LGBTI Core Group, and welcoming the high-level government speakers. She noted the historic nature of the day’s event, “Over 30 countries are represented here, over 500 people RSVP’d, countless are watching online, and most significantly we will hear remarks on LGBTI rights from the UN Secretary-General and the newly appointed High Commissioner for Human Rights”.

Jessica Stern issued a call to action to the participating states, “We know that when LGBTIQ people do not have the support from their governments, there is impunity and violence. We need to collaborate to prevent this from happening.” She added, to LGBTIQ people around the world, “We’re here, we support you, and you are not alone.”

The evening was attended by States, UN Agency and Secretariat representatives and civil society. The event was moderated by Jessica Stern.

The first speaker, Norwegian Minister of Foreign Affairs, Ine Eriksen Søreide focused on some states in saying, “I urge the UN, meaning all of us, in collaboration with member states and civil society to do more to make sure that all states respect the rights to life of all persons, including lesbian, gay, bisexual, transgender and intersex individuals, and to address the root causes of violence and arbitrary killings, and promote the universal decriminalization of homosexuality… We cannot look the other way when minorities are faced with discrimination and violence.”

Keynote speaker, the United Nations High Commissioner for Human Rights Michelle Bachelet, did not mince words in her opinion of LGBTI rights internationally. “There should be nothing “controversial” about stopping people being murdered, or executed by agents of the State, simply because of who they are or whom they love.” She added, “My presence here is not formal. I believe in this: people should get the security and love they need.”

The High Commissioner issued a call to action to present and absent UN member states in saying, “We need to see more countries taking steps to bring their laws and practices in line with the fundamental equality of all their people.”

This advice aligned with the mission of the Secretary of the equality between women and men of France Marlène Schiappa. She reminded the group that France pressured Russia on LGBTI human rights violations in Chechnya, in a joint statement along with Denmark, Estonia, Finland, Germany, Iceland, Ireland, Latvia, Lithuania, the Netherlands, Norway, Sweden, the United Kingdom, the United States, and Canada.

Schiappa said, “We have the collective responsibility to protect LGBTI people who are the primary targets of these crimes… There can be no impunity for such crimes... France is fully committed to continue with you, dear allies of the core group and the coalition for equal rights… Love should never be illegal.”

Vice Minister for Foreign Affairs of Spain Fernando Valenzuela added the theme of state accountability to the discussion, “Accountability is to be added to these ideas, as individuals we pledge ourselves to fight against discrimination and violence. However, states have a specific and extra responsibility regarding extrajudicial summary or arbitrary executions… I think that together we have to find the best way to achieve this aim.”

The Minister of State for Africa at the Foreign and Commonwealth Office of the United Kingdom, Harriet Baldwin, reaffirmed the United Kingdom’s current commitment to supporting LGBTI individuals and decriminalization of homosexuality within the UK and the commonwealth realm. She said, “Anti-Sodomy Laws were wrong then, and they are wrong now. The UK wants to right that wrong, and wants to support LGBTI efforts to advance their rights.”

Photographer Robin Hammond brought another facet of the struggle for LGBTI human rights into the picture. His project, “Where Love is Illegal” focuses on areas in which perpetrators can act with impunity. He said, “I am merely a storyteller. What I do have to offer are these portraits so you might see; they offer you their words so you might hear, and together we offer you their stories so you might feel and remember, but crucially: you might act, because inaction means death.”

In a panel discussion between Jessica Stern, Ugandan activist Kasha Nabagesera, and UN Special Rapporteur on extrajudicial summary or arbitrary executions Agnes Callamard, important messages on state accountability were given to the audience.

Agnes Callamard detailed the effect that anti-LGBT laws have upon the well-being of LGBTI individuals in fields not often discussed, such as receiving proper medical, economic, and other state-related resources. She remarked, “Gender and sexual identity are a strong determinant of the enjoyment of human rights, in particular, the right to life.”

Ugandan activist Kasha Nabagesera detailed the anti-LGBTI violence that occurs from state and civilian actors around Africa in saying, “The people who are supposed to protect us are those who harm us.”

When asked “What can the governments in this room do to support LGBTI people?” by Jessica Stern, Kasha Nabagesera responded, “We all must hold our governments accountable when they sign on these resolutions.”

Minister of Foreign Affairs for the Netherlands Stef Blok spoke on the progress the Core Group has made with optimism for the future, “It’s been ten years since we have started our work with the LGBTI Core Group and indeed we have made a lot of progress in our objective of reaching equal treatment of LGBTI [people]...” He added, “We are committed to continue the dialogue with people that think differently on these issues and find common ground, because every human being has the right to life and love without discrimination.”

Minister of Foreign Affairs of Argentina and Co-Chair of the LGBTI Core Group Jorge Faurie expressed pride in his country as being one of recognition and non-discrimination policies. He added, calling on other representatives to foster their commitment not only in anti-violence but also education, “We, the state, have a responsibility to protect human rights... It is important that the state makes campaigns to fight and teach people not to accept discrimination at any level.”

UN Secretary-General António Guterres recorded and submitted a video message for the event. His words marked the first time any Secretary-General in history has spoken on LGBTI issues. He recognized and pledged the United Nations’ support for the LGBTI community saying, “Let me underscore that the United Nations will never give up the fight until everyone can live free and equal with dignity and rights.”

The message of the night was clear: while some progress has been made there is a lot more work to be done to enable LGBTIQ people to live free from discrimination and persecution internationally.

To see pictures from the event: 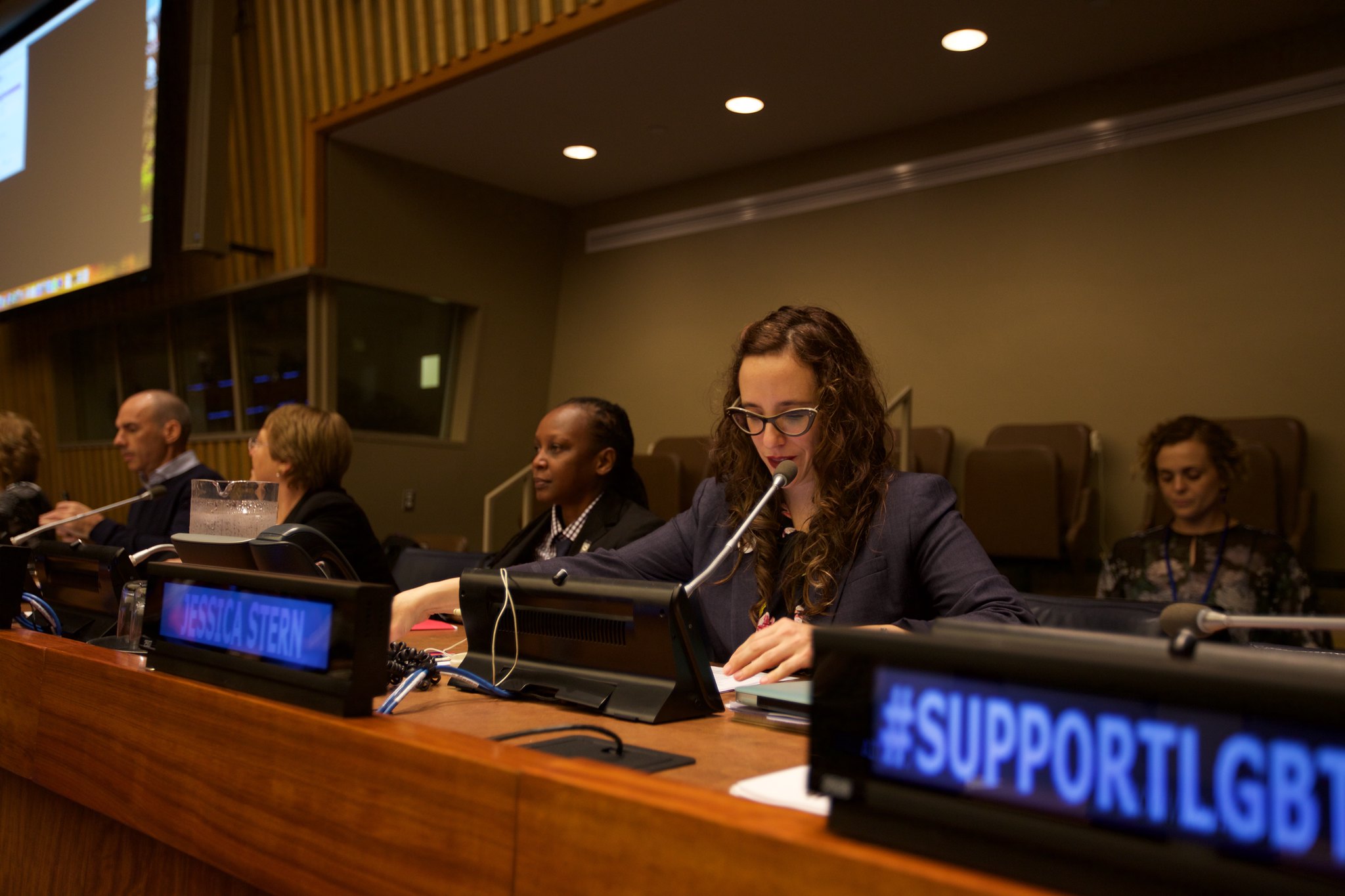 Keynote speeches and remarks were made throughout the event by the UN High Commissioner on Human Rights, the UN Secretary General, Heads of State, senior ministers, and special representatives from 12 countries, they included:

*Note: Not all scheduled speakers were able to give their remarks due to time-constraints. Those who did not speak are indicated with an asterisk*