In what seems like a blink of an eye another year has passed. We began this year full of hope and determination to overcome the pandemic and return to some semblance of normalcy. While vaccines have become widely available in some places, travel has resumed, and in person connections are possible, albeit in more restricted ways, vaccine access is far from equitable, and our global LGBTIQ communities have continued to face amplified effects of the pandemic.

Last week OutRight hosted our annual global conference for LGBTIQ people - OutSummit. Throughout the conference we heard about increasing challenges to not only achieving further progress in the recognition of our humanity, but to an active offensive against rights we have already secured. Participants spoke of facing an offensive against gender justice, bodily autonomy, LGBTIQ equality and human rights overall; about those opposing us increasingly using human rights language, pinning one right against another and positioning LGBTIQ equality as a threat to children, families and women. Many speakers also highlighted increasing divisions in the women’s, feminist and even LGBTIQ movements, especially when it comes to sex workers’ rights, trans people and non-binary people’s rights.

And yet, despite the heightened challenges, and despite the many setbacks encountered over the past year, throughout OutSummit participants found hope and drive.

If you weren't able to join us, I encourage you to look at the highlights and watch recordings of sessions all available here. And as we wrap up this year, I want to leave you with quotes from our keynote speakers, Masha Gessen and Gigi Chao: 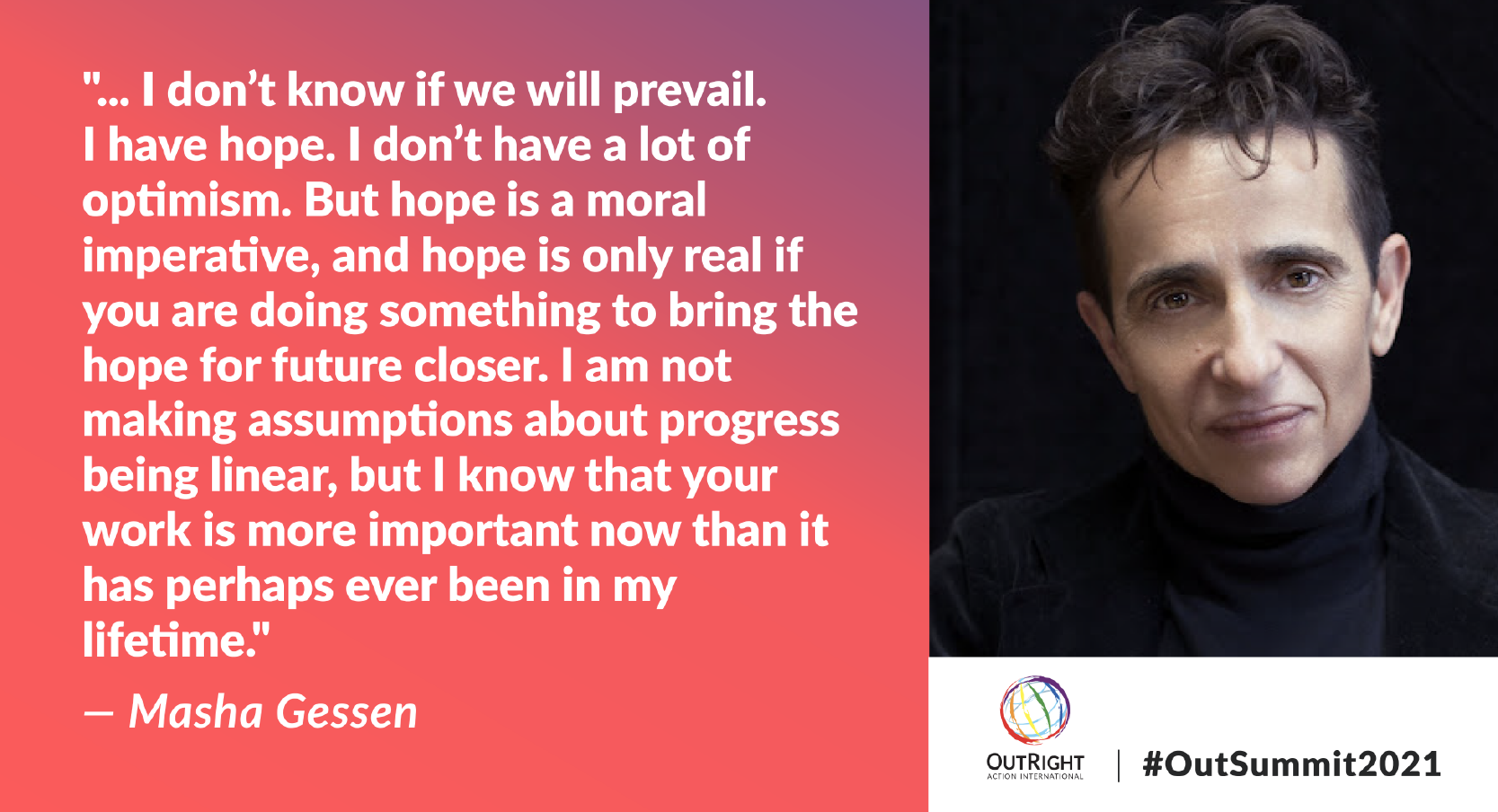 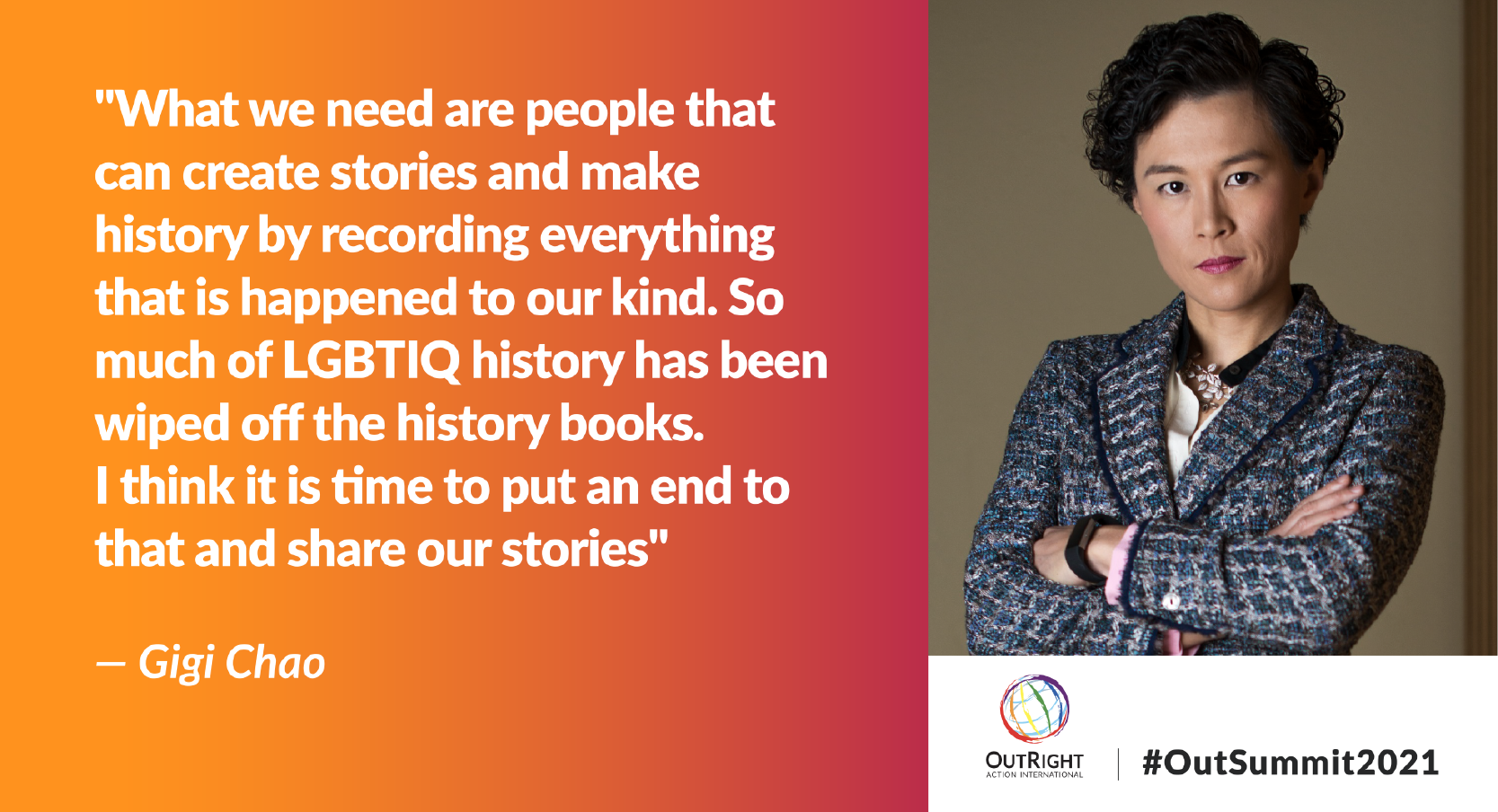 With best wishes to you and your family in the holiday season!

Many thanks to OutSummit supporters who make the event possible: 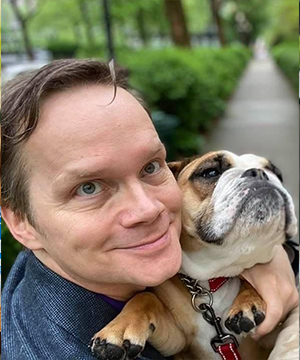 Damon (he/him) is OutRight’s Senior Development Officer for Institutional Giving responsible for maintaining partnerships with institutional donors, and writing and reporting on grants supporting OutRight’s work promoting the human rights of LGBTIQ people everywhere. Damon lives in New York with his husband and their 3-year-old English bulldog Saga. Outside of work, he enjoys creative writing and knitting. His international experience includes working in Central Asia for five years, part of which he did as a U.S. Peace Corps Volunteer.

Holidays are usually a time spent with families. For LGBTIQ people around the world, biological families are too often unsupportive, LGBTIQ-phobic, or even violent. As such, common among our communities is the concept of chosen family – a group of close friends or relatives who we see as family, and who serve the roles families typically serve, such as offering support, comfort, love and safety.

In many parts of the world this is holiday season and a time of year which emphasizes giving – and what could be more important than giving back to the community?

If you are in a position to donate, please consider making a gift for global LGBTIQ equality. With partners in regions around the world, OutRight works every day to build movements, mobilize advocacy, and create a foundation of research in order to bring about systemic change.

But without your support, none of that is possible.

Making a gift has never been easier: you can donate online in most currencies, donate crypto, or from donor advised funds, checks, or gifts of stock. We accept a wide variety of donation types to make your gift giving experience simple, and we appreciate every gift.