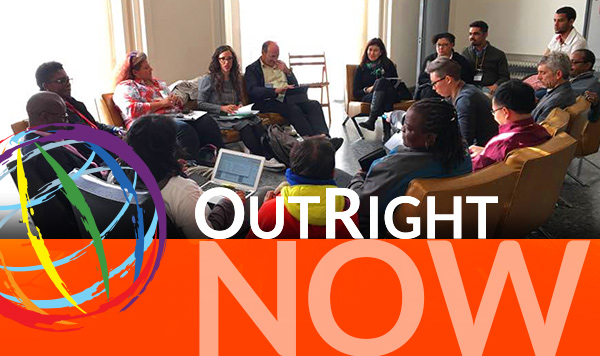 From July 13-15, I headed to Montevideo to represent OutRight at the fifth in a series of meetings about the obligations of governments and others to human rights for LGBTI people: domestically, internationally, and financially.

Convened by Uruguay and the Netherlands, thirty-nine governments sent representatives. The majority of governments were from Europe or the Americas. Some others also RSVP’d, including the governments of the Philippines, Vietnam, Thailand, and South Africa.

Times, they are a-changing. Not only were the mechanisms of international law present, like the United Nations and Organization of American States, but global financial institutions, too. The World Bank sent 3 representatives, emphasizing the “cost” of homophobia and transphobia to national economic development.

Yet, talk inside stale conference rooms has little meaning without action. Thankfully, we were 90 activists from around the world, and we were fierce! Gender identity recognition; ending forced surgeries on intersex people; funding LGBTI organizations and programs; poverty alleviation and the Sustainable Development Goals; and stopping police brutality were just some of our priorities.

The innovation of this meeting was the creation of a mechanism designed to work year-round outside of any single system to advance LGBTI rights. On the first day, the Equal Rights Coalition (ERC) was formally launched, and before the meeting closed, 30 founding government memberswere announced.

There was a healthy debate about the ERC. What will it do, who can be a member, and how will it work? Will it produce anything substantive or just pink-wash government neglect, mere window dressing? Can government-to-government private dialogue achieve what megaphone diplomacy cannot?

One thing was clear: there should be nothing about us without us! For the ERC to fulfill its goals, civil society like OutRight, the activists in Montevideo, and all of you mobilizing for human rights around the world must be consulted.

As the ERC defines itself, OutRight has three recommendations for state members:

The next step from Montevideo will be for states to flesh out the ERC concept. OutRight will follow the process closely, pushing for accountability and ambition in what governments say and do in the name of LGBTI rights. We are inspired by the growth in allies to our cause, and we believe the time is right for committed action!