Welcome to the first edition of OutRight’s quarterly e-newsletter highlighting our programmatic work across countries and regions around the world. The newsletter will provide regular updates about OutRight's initiatives around the world and our fight for LGBTIQ rights everywhere.

We welcome feedback and any questions you might have - please send us an email at rkwatra@outrightinternational.org.

Media has incredible power to shape public opinion about LGBTIQ people, and media training and engagement is a centerpiece of OutRight’s strategy to advance the human rights of LGBTIQ people. We recognize that media that promotes independent and fair information transforms social and cultural practices of discrimination at all levels of society.

In the end of 2016, OutRight monitored Arabic language media across 22 countries that discussed sexual orientation and gender identity issues. What we found was unsurprising; LGBTIQ people were mostly portrayed in a negative way. LGBTIQ people were sensationalized, portrayed as sinners, promiscuous, and criminals, and medical misinformation was common. Positive stories of LGBTIQ people as well as articles which covered the dynamic human rights activism taking place in the region were largely missing. 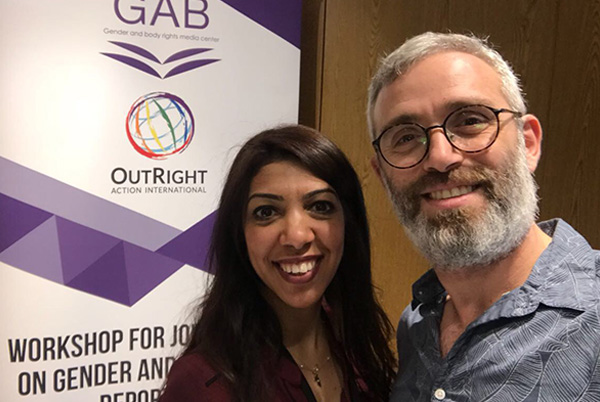 In order to help change the landscape of discussion and representation of LGBTIQ people OutRight engaged in a media training initiative together with the Arab Foundation for Freedoms and Equality, to sensitize journalists on how to ethically and professionally report on LGBTIQ issues. Our first successful media training led to a second that received an incredible interest - over 200 journalists applied for only 14 slots. The second training included a conservative journalist who felt the material was so overwhelming that she had to leave the room multiple times - but she kept coming back, exasperated but intrigued and willing to learn. One of the participants in the first training, a trans woman from Egypt, went on to start the largest resource on trans issues in Arabic and joined the second training to facilitate a session via Skype.

Back in 2014, OutRight published a report about violence against lesbian, bisexual, and trans people in five Asian countries. The report found that much of the violence experienced by LBT people are at the hands of their family’s or partners. To avoid exposing their family, their relationship, and themselves to unwanted negative attention and homophobic or transphobic reactions, LBT people who experience domestic violence tend to avoid seeking help from social services, counselors, police, or legal services. This is the case in the Philippines, where being lesbian or gay is not a crime, as well as in Sri Lanka, where same-sex relations are criminalized, adding barriers to accessing assistance and protections for violence.

Over the last couple of years OutRight partnered with EnGendeRights from the Philippines and the Women and Media Collective in Sri Lanka to tackle family violence, enhance domestic violence protections for LBT persons, and sensitize counselors, first responders, and other care providers. 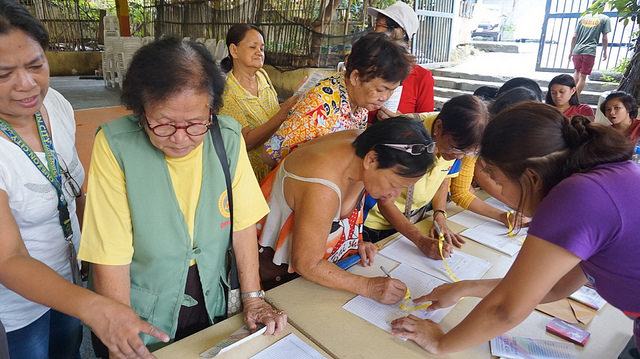 Participants at a training in the Philippines (Photo: OutRight, Ging Cristobal)

Because of our partnership in Sri Lanka, for the first time there is now a a manual for counsellors on how to address people of diverse sexual orientation and gender identity, and provide non-discriminatory counseling to LBT people. A social media campaign was also launched to encourage conversations about LBT people within families and to deter the use of violence by family members to force LBT people to change and conform. Also, a report on LBT-specific concerns was presented to the United Nations Committee for the Elimination of Discrimination Against Women (CEDAW), and is now being used by women’s organizations to advocate for sexuality as a feminist issue.

We have initially focused our efforts in the Philippines in Quezon City, the most populated city in metro-Manila and the first city to enact protection against discrimination for “homosexuals” in 2003 and against discrimination on the basis of sexual orientation and gender identity in 2014. OutRight’s staff member, Ging Cristobal, and Claire Padilla of EnGender Rights, trained 187 service providers, resulting in LGBTI friendly services for the community to access in over half of the city’s municipalities across six districts. Through “echo trainings” over 1500 people in total have been reached! Rainbow stickers are now displayed outside municipal offices to signal availability of LGBTI sensitive services. Community forums were also convened at the grassroots level to start discussions about sexual orientation, gender variance and family violence. The audience included parents, educators and police officers. One of our greatest allies in Quezon City throughout this project has been the Vice Mayor, Joy Belmonte.

To get more details about these projects be sure to check out our website. Our work in both countries on these issues will continue.

Almost 10 countries in the Caribbean continue to have in place colonial-era anti-sodomy laws that criminalize consensual sexual behavior between two people of the same sex. Some of these laws are being challenged successfully through the courts, as is the case for Belize and Trinidad and Tobago. Despite these changes, discrimination against LGBTIQ people remains pervasive and negative social attitudes against LGBTIQ people are commonplace. Strong civil society movements are needed to combat both punitive laws and change social attitudes.

Recognizing the importance of registration and the often extremely onerous and complicated process of registration, OutRight worked with four groups in the Caribbean to help them gain legal status. These organizations include VincyCHAP in Saint Vincent, MESH in Antigua, Our Circle in Belize, and TransWave in Jamaica. For civil societies all around the world, the ability to register brings with it many advantages. It influences the organization’s impact, visibility, advocacy, and provision of services. It also impacts the safety of staff and members, and has practical implications such as the ability to even open a bank account. For many of the newly registered groups in the Caribbean, OutRight’s support went beyond the legal registration process, but also included support in developing governance structures, and advising on work plans.

An important part of our Caribbean program is to support advocacy with evidence gathered by researching the realities of LGBTIQ people in the region. The findings will support legislative and policy change, help increase awareness, and mobilize the community and potential allies: the three pillars of the program.

In commemoration of the 2018 International Day Against Homophobia, Transphobia, and Biphobia (IDAHOTB), OutRight, as part of the United Nations LGBTI Core Group, organized an event at UN headquarters in New York. The event gathered more than 200 people, the program was moderated by Argentinian Ambassador Martin Garcia Moritan, featured remarks by H.E. Ms. Ana Maria Menéndez, and Senior Advisor on Policy to the UN Secretary-General. A moderated panel discussion with LGBTI community members and allies from the sectors of sports, culture, and business and civil society followed. The event had a mix of queers and allies - including French Olympian Casey Legler, Beth Brooke-Marciniak, Global Vice Chair of Public Policy for EY and OutRight UN Fellow Xeenarh Mohammed, founder of ReSista Camp in Nigeria.

The event aimed to raise awareness at the United Nations and more widely of the ways in which LGBTI individuals and allies in various industries have joined together to raise visibility, acceptance and promote and protect the human rights of the LGBTI community.

The UN program team has also joined with COC Netherlands and RFSL to form the leadership team of the LGBTI Stakeholders Group for the 2018 UN High Level Political Forum (HLPF). The team has prepared a useful primer on the HLPF which answers frequently asked questions about the HLPF, the outcomes, and how civil society can engage.

The HLPF is the mechanism for reviewing the implementation of the United Nations Sustainable Development Goals (SDGs) as part of the 2030 Agenda on Sustainable Development. Although LGBTI people are not specifically included in the text of the Agenda 2030, the “leave no one behind” principle necessitates the inclusion of LGBTI people, whose rights must be actualized to meet this ideal.

The Mission of the Stakeholders Group is to protect the interests of LGBTI persons through effective, broad and balanced participation in HLPF and actions at the global, regional and national levels.

You can learn more about the HLPF in our recently released UN New Yorker.

OutRight was recently commissioned by the United Kingdom’s Government Equalities Office to produce a “Best Practice Guide to Equality on Sexual Orientation and Gender Identity”. The guide was launched in April around the Commonwealth Heads of Government meeting in London. The guide includes 10 country case studies from across the globe highlighting good practices states have taken to address issues regarding sexual orientation and gender identity. Examples include holistic policy reforms in Malta for transgender and intersex people and health programs sensitizing healthcare workers on LGBTIQ issues in Jamaica. The launch has been followed by OutRight events to present the guide in Botswana, and will be followed by other events in New York, Singapore, Nadi (Fiji) and in the Caribbean. 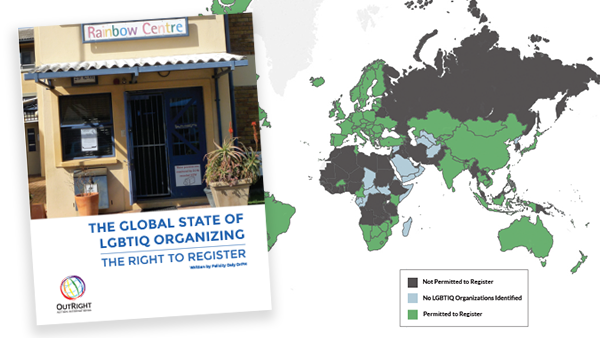 The Global State of LGBTIQ Organizing: The Right to Register

OutRight launched our latest report, The Global State of LGBTIQ Organizing: The Right to Register, which finds that LGBTIQ organizations are unable to register or cannot be found in 85 of 194 countries. In the worst cases, they experience state surveillance, indiscriminate arrests, state sanctioned violence, and are even branded as threats to national security. The fact that LGBTIQ organization cannot register or cannot be found speaks to a global crisis of democracy and human rights more broadly. The report highlights 10 case studies which explain some of the situations as well as the work-arounds that groups have taken to still be able to operate. To read some of the coverage of the report, check out articles in Thomson Reuters, NBC, Washington Blade, INTO or Gay Star News.

A video series by OutRight and The Advocate

OutRight partnered with LGBTIQ media outlet, The Advocate, and actor and OutRight board member, Karamo Brown, on a series of videos to bring attention to LGBTIQ issues around the globe. World View the title of the series touches on issues regarding punitive laws, queer bodies, the UN Commission on the Status of Women, and a special episode on Jamaica. 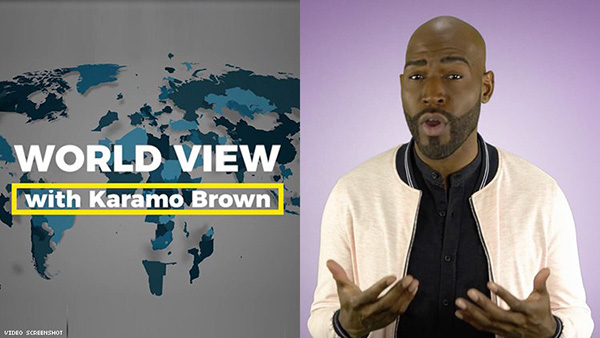 “The Indonesian parliament is expected to vote in favor of proposed Criminal Code amendments that will criminalize consensual same-sex behavior and sex outside of marriage (extramarital and premarital). This vote will disproportionately impact lesbian, gay, bisexual, and transgender (LGBT) people along with thousands of heterosexual adults in intimate non-marital relationships.”

Since this article was published, things have changed regarding the Criminal Code amendments being deliberated in the Indonesian Parliament. The article that calls for criminalizing sex outside marriage no longer includes sex between people of same sex. However the definition of crimes against decency may be expanded and there are other provisions that will be used to criminalize sexuality -- such as criminalizing the use of contraception.

from Women and Media Collective

“Domestic and family violence are such culturally steeped things and we know that women experience them uniquely. We wanted to be able to dedicate an analysis to this. We’re not saying that gay men don’t experience family violence, of course they do, but I think the way violence affects women is still unique because of larger violence against women as a way of life, and lesbians, bisexual women and gender non-conforming people experience violence uniquely and in specific ways because of misogyny embedded so deeply in our structures and society.”