Welcome to the third edition of OutRight’s program newsletter! Through it we want to share with you insight and highlights of some of the work that your support has helped our programs team to carry out in recent months, and the impact that work has on the lives of LGBTIQ people around the world. This is by no means an exhaustive list, but rather a shortlist of highlights.

We hope you find this informative and interesting. As always, we welcome your feedback, your comments and questions!

OutRight’s study into Arabic Media published in 2017 showed that LGBTIQ people and surrounding issues are predominantly reported highly negatively in Arabic media. Although strong conservative influences in society have a strong role to play in this, as does the prevalence of legislation criminalizing same-sex relations across the region, we also learned that a lack of understanding and knowledge among journalists about the lived realities of LGBTIQ people was an important factor in how they reported on the topic.

While the road to legislative and policy change in the region may be a long, and risky one, raising awareness and understanding among journalists seemed like a relatively safe avenue to take with potentially high returns in terms of changing hearts and minds about LGBTIQ people and issues.

We took this learning and, in cooperation with the Arab Foundation for Freedoms and Equality, embarked on a project aimed at tackling this problem. Through a number of trainings 50 journalists from across the region have been trained so far in sessions aiming to raise awareness and knowledge, debunk myths and stereotypes about LGBTIQ people, and sexual orientation and gender identity more broadly, and report on gender, sexuality, and numerous topics related to issues faced by LGBTIQ people, in an inclusive way which promotes understanding, rather than perpetuates negative stereotypes.

We also launched an informal network between the journalists who took part, in order to facilitate information exchange and support among them and thus, hopefully, grow the impact they can have in their respective media outlets and countries.

The influence of media on the knowledge and opinions of their readers of viewers is immense. As such, through this project we not only improved the knowledge and understanding of 50 journalists, but the subsequent changes in their reporting have the potential to have a far-reaching ripple effect on their audiences, with time, slowly, changing the dominant negative perceptions and prejudices about LGBTIQ people.

Domestic and family violence continues to be a reality for LGBTIQ people around the world, and much of it goes unreported for fear of outing, stigmatization or even imprisonment in countries where same-sex relations are still a crime – such as Myanmar.

With support from Open Society Foundations, and in partnership with Equality Myanmar and the Myanmar LGBT Rights Network (a coalition of 26 LGBT groups), OutRight launched a project to improve domestic violence and family violence protections and services for LGBTIQ people in the country.

Through capacity building of LGBTIQ groups on topics such as data collection, an awareness campaign, and sensitization of members of parliament we have been working to promote zero tolerance for domestic and family violence targeting LGBTIQ people. Moreover, as a draft Prevention of Violence Against Women Law is currently under consideration, the project has aimed to strengthen collaboration between LGBTIQ groups and a coalition of women's organizations to push for a non-binary definition of gender and inclusion of explicit reference to protections from domestic and family violence for LGBTIQ people in the law.

So far, a dialogue with lesbians, bi-women and transmasculine persons was held to increase diversity of people covered by the project. At least six participants signed up to participate in a subsequent training on documentation of domestic and family violence among LGBT communities, showing the interest in and need for such work. The latter took place over four days, with 12 participants, on how to conduct interviews and gather data on domestic and family violence among LGBT families.

The LGBT Rights Network is just about to launch a questionnaire for documenting violence in LGBT communities with an aim to receive responses from over 400 LGBT people, which will inform and shape the project going forward. 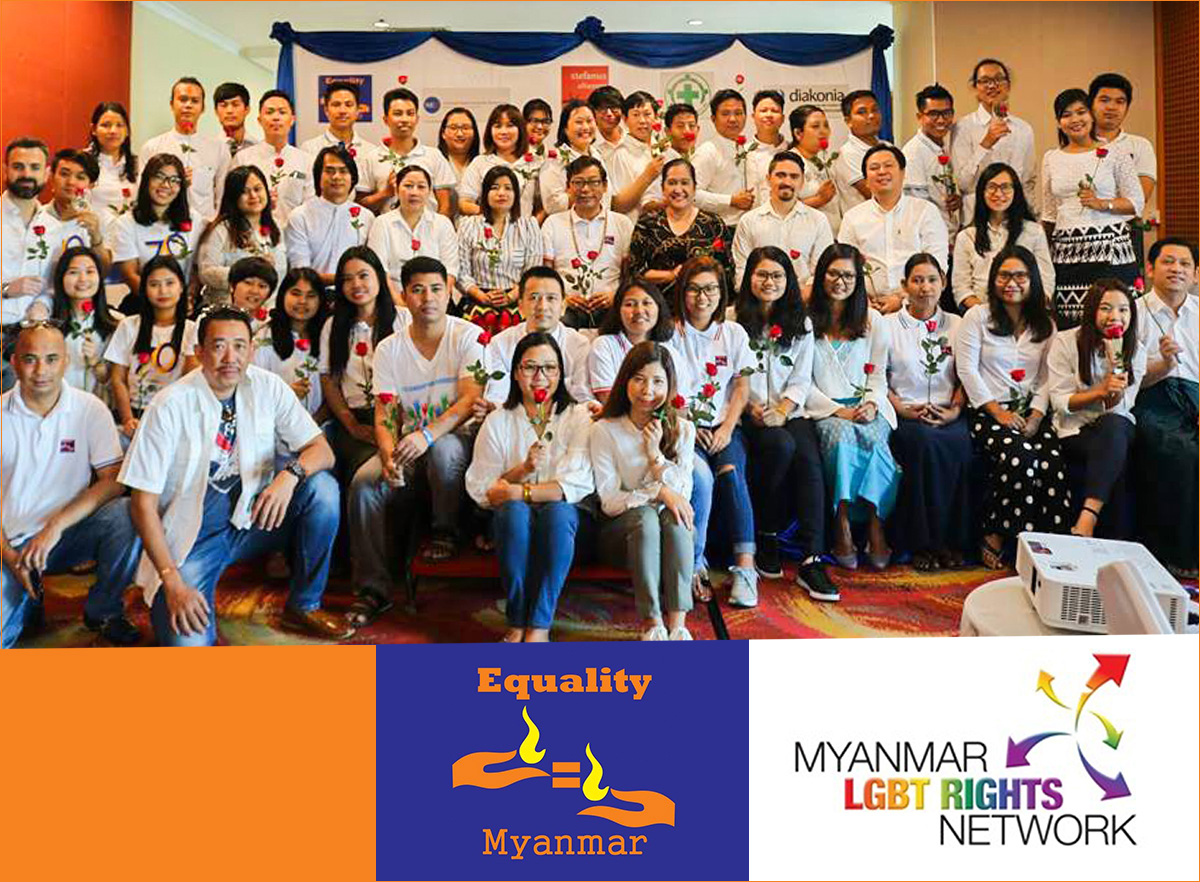 We wanted to change that, so together with partners in the region OutRight launched the “Frontline Alliance: Caribbean Partnerships Against Gender Based Violence.” The network includes organizations from across the Caribbean and aims to raise awareness about the prevalence of gender based violence against women and LGBTIQ people, to train engage first responders and service providers on how to ensure inclusivity of LGBTIQ people, as well as to engage local government officials with a view to improving policies and protocols designed to tackle gender-based violence.

So far OutRight has already hosted training of trainers sessions in Haiti, St. Lucia, Trinidad and Tobago, and Antigua to address gender-based violence against women and LGBTIQ people in the Caribbean. By the end of the project over 200 people will be trained, who will be able to directly implement the learning into their day to day work, thus immediately being able to support LGBTIQ victims.

Furthermore, a number of trainers have also been trained, and several more will receive the training in the coming months, on the topic. They will continue to pass this knowledge on to ever more first responders or service providers, casting the net of impact on the lives of LGBTIQ people ever farther. 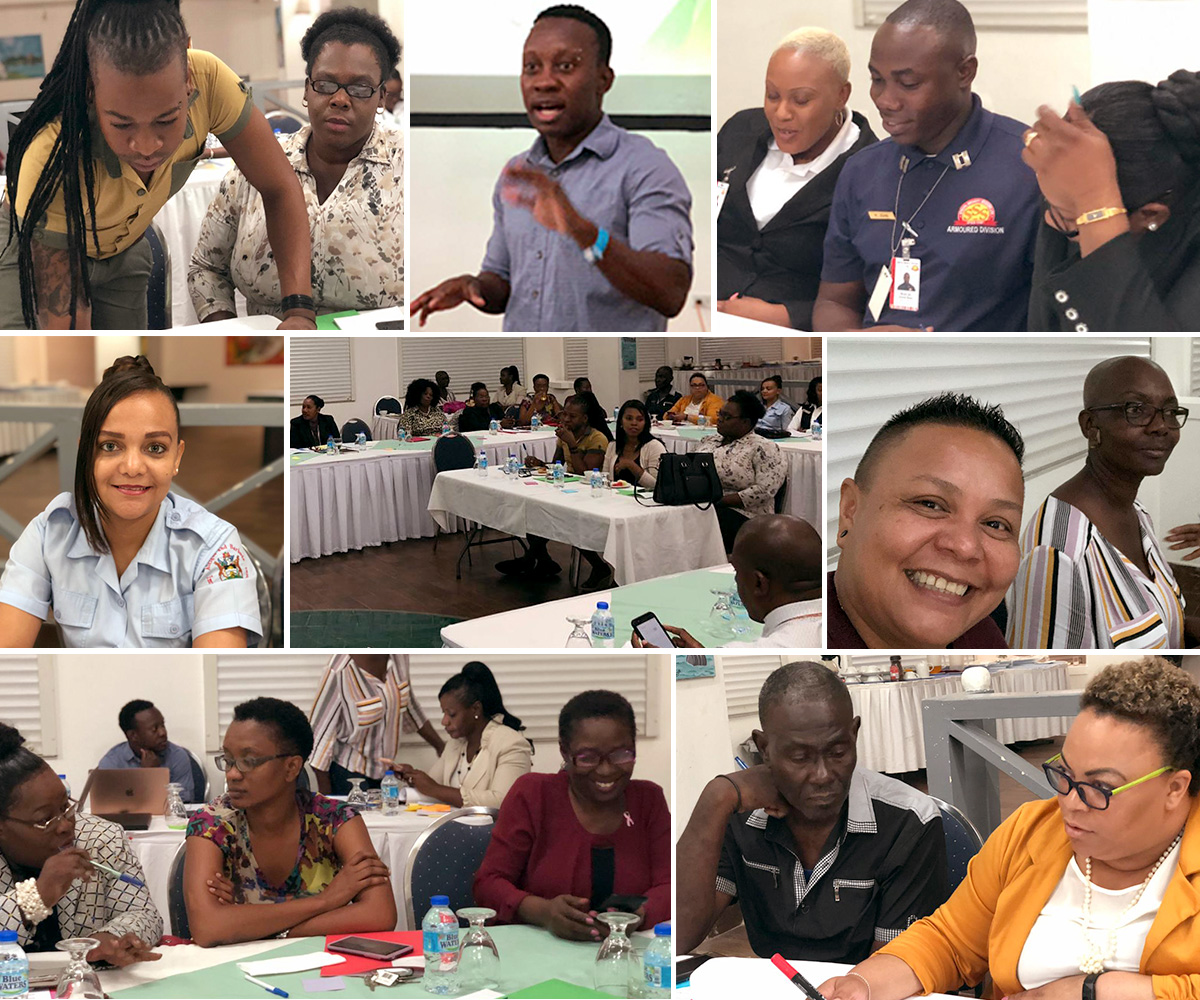 Caribbean attendees at the 2019 Frontline Alliance: Caribbean Partnerships Against Gender Based Violence.

A key partner of the majority of our work at the UN is the LGBTI Core Group, a network of cross-regional states which have committed to collaborating within the New York-based UN system to raise awareness and promote progress for equality of LGBTIQ people.

In August the LGBTI Core Group adopted its latest workplan for the year 2019/2020, in it officially including OutRight as the group's secretariat. This status will enable us to work even closer with the group to ensure ever more progress is achieved in the promotion and protection of the human rights of LGBTIQ people through UN mechanisms and processes.

To read more news from our UN program have a look at our latest UN New Yorker.

In August we released a groundbreaking report exposing the global reach of so-called conversion therapy practices seeking to change, suppress, or divert one’s sexual orientation, gender identity or gender expression. As discussions in some countries in Latin America, Australia, Europe and North America about banning so-called conversion therapy have intensified, awareness of the practices in these regions has grown. However, next to nothing was known about similar practices in other parts of the world.

Our report changes that. It is the first-ever global survey on the topic, with input from 500 survey responses from across the world, 19 in depth interviews with survivors from 11 countries, an extensive literature review, as well as in-depth conversations with experts.

Our report overwhelmingly shows that so-called conversion therapy happens across the world, predominantly promoted and perpetrated by people acting in the name of religion or pseudo-healthcare, often with pressure or even coersion by families. While the practices may vary due to religious, cultural, or traditional norms and contexts, they are harmful and never work; instead, they cause deep, lasting trauma that affects every realm of life.

Such practices are the epitome of what the LGBTIQ movement has been fighting, and symptomatic of just how much of an uphill battle we still have to fight to gain acceptance and equality. We hope that this report will shed much needed light on the global prevalence of these barbaric practices, and incite ever more countries to seek ways of not only banning “conversion therapy”, but finding genuine, sustainable ways to ensure LGBTIQ people have true and sustainable access to their full human rights, and ensuring that the misinformation, prejudice and perceptions of the norm which drive families and individuals to seek conversion therapy are eradicated for good.

To learn more about the report, register for our webinar with author Amie Bishop. 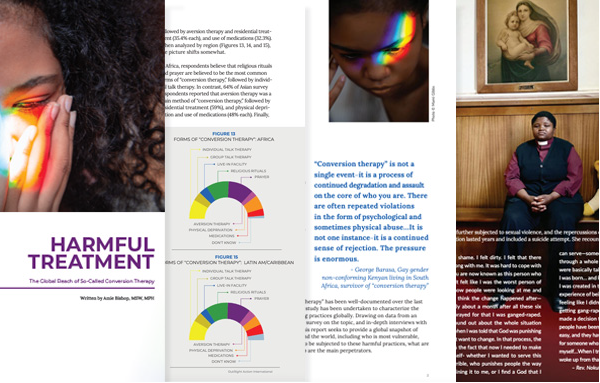 On Sunday, 30 June 2019, 50 years after the spontaneous riots in protest against police raids and shaming of LGBTIQ people at the Stonewall Inn gave rise to the contemporary LGBTIQ and Pride movement, New York City hosted the World Pride March.

Over 150 partners, supporters and friends registered to join OutRight in taking part in the march on Sunday June 30th. The march was rumored to include 6 million participants, and took over 12 hours. OutRight used the opportunity to draw attention to challenges that LGBTIQ people and movements still face around the world. 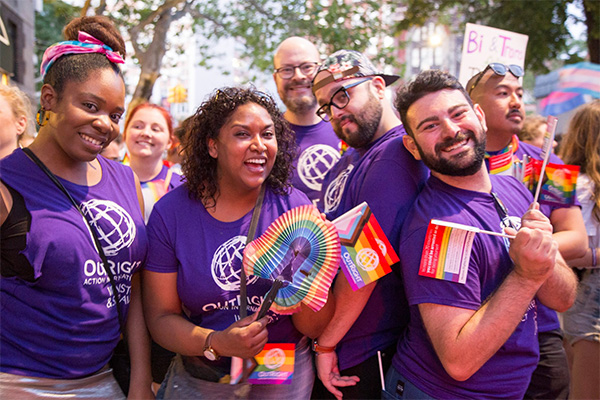