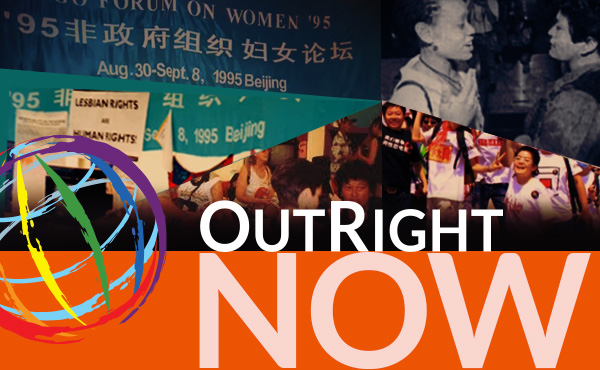 Almost 25 years ago, in 1995, the UN held its Fourth World Conference on Women in Beijing, which resulted in Member States adopting the Beijing Declaration and Platform for Action calling for gender equality and realization of human rights of women across the globe.

Driven by OutRight and a small group of partner activists, the Beijing Conference became the first UN space at which lesbians were truly visible. South African activist Bev Ditsie became the first out lesbian to address the UN on behalf of OutRight (then IGLHRC). Although “sexual orientation” was left out of the declaration, lesbian issues formed part of the discussions, inclusive language was used, and the visibility itself established crucial ground for subsequent advocacy.

The LGBTIQ movement and gender equality movement are naturally intertwined. The norms and stereotypes that uphold gender inequalities also cause discrimination, persecution and stigma against LGBTIQ people. Sexism, homophobia and transphobia are rooted in the same prejudices which cause gender inequality; namely that the sex we are assigned dictates how we are supposed to look, behave and live, and who we are supposed to love. Gender based violence affects people across the LGBTIQ spectrum, precisely because we don't fit those arbitrarily assigned gender norms.

In 2020 a quarter of a century will have passed since the Beijing declaration. These movements work closely together, and we are a world away from the context we faced in 1995, but we also face a strong backlash, even from some organizations and individuals who identify as feminist.

The UN is marking the anniversary of the Beijing Conference and Declaration with a number of events which provide an avenue for LGBTIQ inclusion. But unlike 25 years ago, we in civil society should not be the only ones driving LBT visibility and inclusion. Governments have a responsibility to “leave no one behind” and to ensure that the conference and its outputs are truly inclusive of all.

OutRight is working hard to ensure this. Our colleagues have already participated in a number of regional preparatory meetings held in Addis Ababa, Bangkok and Geneva.

Moreover, we have just opened applications for Beijing +25 Fellows, which will allow 8 LBTIQ Human Rights Defenders from the Global South and East, with the guidance and support of our UN Program, to engage systematically in the many processes of the Beijing+25 anniversary, and ensure genuine inclusion of LGBTIQ issues at all levels.

I hope to see many of you at OutSummit in New York City next month where, among many other topics, you will also be able to find out more about our UN program and Beijing +25 plans. If you haven't already, register here.