The beginning of the year is often a time to reflect on the year passed. The pandemic, and the unequal access to vaccines, continue to present extraordinary challenges across the world, and across different communities, including for LGBTIQ people many of whom continued facing a crisis in 2021.

In spite of this, the vibrant LGBTIQ movement saw several important wins in 2021. Argentina enabled a third gender marker based on self-determination across all official documents. The U.S. followed suit with the first passport with an X gender marker. Botswana upheld a ruling decriminalizing same-sex relations. Chile became the 31st country to recognize equal marriage, and Canada became the sixth to ban so-called conversion therapy.

However, what sticks out even more is the backlash and attacks by conservative governments.

In Ghana, a law enhancing criminalization of same-sex relations and criminalizing advocacy for LGBTIQ equality was proposed; in Hungary promotion of information about LGBTIQ topics has been banned; in Poland a draft bill banning Pride manifestations is pending; and in Afghanistan LGBTIQ people, are a particular target of the Taliban regime, as documented by our most recent report.

Fighting for progress for LGBTIQ people is hard, and successes are easily overshadowed by setbacks and backlash, but we'll keep fighting in 2022, and every year after that. Thank you to all of you who support us in the continues fight!

Maria Sjödin
they or she pronouns
Acting Executive Director 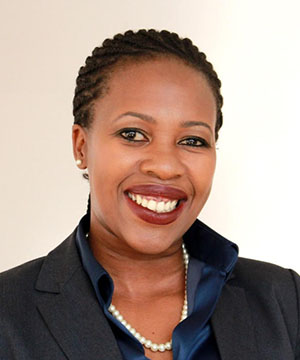 Khanyo (she/her) is a South African international human rights lawyer focused on equality, non-discrimination and access to justice in Africa. Khanyo recently joined OutRight as African Advocacy Officer. Khanyo has over 10 years’ experience working in regional and international organizations in a range of countries in Africa and Europe advancing the rule of law and human rights. When not working Khanyo enjoys going on adventures in new places, reading autobiographies and experimenting with different makeup techniques.

Kimberlé Williams Crenshaw coined the word in 1989. Intersectionality is an analytical framework for understanding how aspects of a person's social and political identities such as gender, race, class, sexual orientation, physical ability, etc. combine to create different modes of discrimination and privilege.

We have a new merch line: Love is Love! Visit the store

Don't miss out on the opportunity to join our team! If you are interested or know someone who would be a great fit, apply here: https://outrightinternational.org/jobs.