It seems like only yesterday, and yet a lifetime ago, OutRight launched the COVID-19 Global LGBTIQ Emergency Fund to support our communities around the world in addressing the mounting vulnerabilities faced by LGBTIQ people as a result of the pandemic. To date, we have held two rounds of calls for proposals, issued USD $3.2M in grants to 310 groups in more than 102 countries, reaching an estimated 145,000+ people. Today we opened a new call.

Almost two years into the pandemic, as the news has moved on from lifting of pandemic-related restrictions to access to booster shots in much of the western world, we know that most of Africa and many countries in Asia are only beginning to roll out first doses. And, as we know well from this and other crisis situations, relief and recovery efforts often exclude LGBTIQ people. As such, for our communities around the world the pandemic is far from over, and in response today OutRight is launching our third call for applications to the Emergency Fund.

Key to moving forward through this pandemic is mass proliferation of the COVID-19 vaccine which, to date, have not seen equitable distribution across countries and communities. Therefore the new call for proposals centers on the need to address intersections of the LGBTIQ community and COVID-19 vaccines, whether that is working on improving access, raising awareness about vaccines among the community, or supporting vaccine access for LGBTIQ people in some other way.

Applications are available here in English, French, Portuguese, and Spanish until November 22, 2021. Please spread the word! Thank you to all the supporters who have made this fund possible! 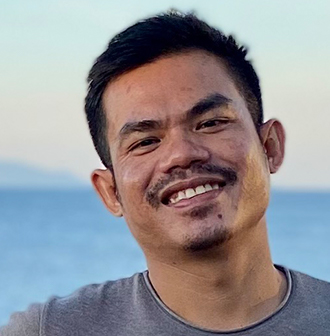 Jonta Saragih (he/him/his) is OutRight's Indonesia Program Officer based in Indonesia. He works with partners spanning LGBTIQ organizations, legal aid, and media institutions at championing anti-discrimination policies at a local level within the Eastern Indonesia region. Prior to joining OutRight he worked on HIV activism, and on advancing public perceptions of the LGBTIQ community in Indonesia through engaging with the media and religious leaders.

Jonta is a night owl, and doesn't mind late evening meetings so that he can join OutRight's staff around the world on zoom. When not working, he enjoys tropical beaches and cooking, especially for friends over gin and tonic.

This year's International Pronouns Day fell on 20 October 2021. In addition to the gendered pronouns she/her/hers and he/him/his, they/them is also increasingly more widely used. However, despite not being directly gendered, the singular they/them assumes that one does not know the gender of the individual being referred to, as opposed to them not having one. As such, in recent years neo-pronouns have become more prominent. Neopronouns are used as an entirely neutral and genderless alternative to the singular they/them/theirs. Neopronouns include xe/xem/xir and zhe/hir/hirs.