As I said earlier, you can expect that a World Social Forum will always be complex and somewhat chaotic, but the World Social Forum in Dakar has exceeded all expectations.One of the comments to the previous posting asked who decides where this forum takes place? Today, all of us participants wondered this same thing.

What seemed like normal delays and a lack of clarity in the program definition erupted into something worse today, exposing serious organizational failures. Until the first day of the Forum there was no defined program that would allow us to track the locations and times of activities.

Apparently, a disagreement between the Cheikh Anta Diop University authorities and local organizers – those who the General Organizing Committee delegated the responsibility for logistics of the Forum – prevented the organizers from scheduling the time and location of all the activities. University officials refused to suspend the regular schedule of classes to give space to the Forum, as had been previously agreed. As a result, the schedule of the activities of the day appeared in the morning in strategic places where people gather to decide how to participate. Then, we all had to walk, sometimes lost around the campus until finally finding the space provided for the activity—only to find out that the space is being used by a group of students and their teacher conducting their regular classes!

This is, in fact, what happened to the workshop that IGLHRC had planned entitled, "World Social Forum: In Diversity" and to the "Inter-Movements Feminist Dialogues," organized by the Feminist Marcosur Association. While deliberating together about what actions to take, Phumi Mtetwa of South Africa showed up, as a savior, and informed us that the Lesbian and Gay Equality Project had solved the same problem with their workshop, “What Are the Social, Political and Economic Conditions That Give Rise to Homophobia in Africa?" by occupying an empty tent. In solidarity, Phumi immediately invited us to share their space. Our friends of the Feminist Association Marcosur decided to imitate the initiative and find an empty tent.  Myself, I considered it more productive to take up Phumi’s proposal and so I joined their group.

The tent was completely empty, without chairs and just the dusty ground to sit on. But this was no obstacle to generating a very interesting debate on the conditions that allow for serious homophobia and to design strategies for the full emancipation and liberation of LGBTI people. There, the voices of Ayesha Imam, a scholar and activist based in Senegal, Francoise Mukuku from APC WNSP of Democratic Republic of the Congo, and Fikile Vilakazi from the Coalition of African Lesbians, among others, helped us reflect upon: the political use of homophobia; the myth that homosexuality is unAfrican; and the inter-relation of the conditions of real people on the continent (especially regarding the hatred, discrimination, and exclusion that LGBTI people experience).

They also helped us visualize and make visible the inter-relation of the struggle against the queer oppression with other current progressive struggles happening on the continent, and to begin strategizing for collective imagining and initiatives for 2011 and beyond.

We were a very small group in the beginning but the strength of the debate and the strategic banner of the  Lesbian and Gay Equality Project gathered more and more interested people to the conversation on the dusty ground in the previously empty tent.

The intensity of dialogue left us wanting more and we all agreed to meet the next day in the same place - the failings of the Forum’s organizers were no longer such an issue for us. 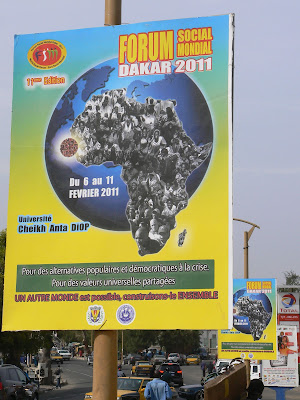