Pride House and Visibility of LGBTIQ Athletes at the Olympics

It’s safe to say that Sochi’s Olympic Village was not a LGBTIQ-friendly community. Especially if you compare it to PyeongChang’s Olympic Village that includes Gender Equality Support Centres and a Pride House in addition to standard facilities. In addition, Sochi had stories of protests around the Russian “propaganda of nontraditional sexual relationships” laws, and this Olympics has stories like, “On Valentine’s Day, meet LGBTQ Olympians in love” and “Meet the LGBT Olympians at the 2018 Winter Olympics”. Even the United States Vice President found himself getting shunned by U.S. Olympians because of his record on LGBTIQ rights. 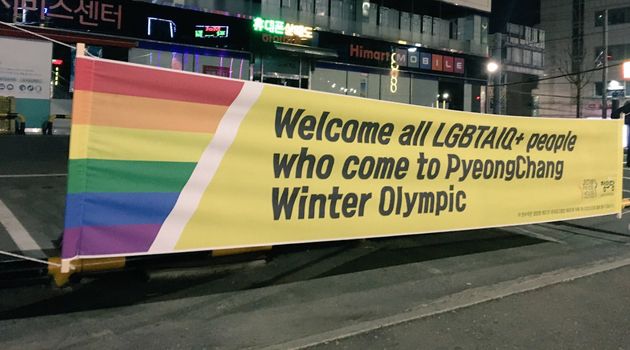 While conservative and religious freedom movements have had a lot of visibility as well as influence, as seen from Bermuda to Indonesia, this Olympics is giving us a glimmer of hope by seeming to stand up for LGBTIQ human rights. How much of it is the host country? How much of it is the Olympians? As we come to the closing ceremonies this weekend, we are wondering, could the positive vibes of this Winter Olympics have lasting effects for South Korea’s LGBTIQ movement?

South Korea has never had laws prohibiting same-sex relations and LGBTIQ people have become much more visible in recent years. There are no anti-discrimination laws in place at a national level other than the National Human Rights Commission Action of 2001. The current president, Moon Jae-in, has stated though that he opposes homosexuality (“South Korea’s presidential frontrunner”, 2017).

Thankfully, progress towards more acceptance and the inclusion of protective laws is advancing. Many local governments in South Korea have anti-discrimination laws on the basis of sexual orientation and gender identity in place while tolerance for homosexuality has been steadily increasing, up to nearly 50% by 2014 (Jiyoon, 2015). Another indicator of positive change is the growing success of Seoul’s pride parade each year. Since 2000, the capital city has hosted this event and in 2017, there were 85,000 attendees (Hyun-ju, 2017).

Even more headway is seen with the inclusion of, the first time in history, a National Olympic House being officially affiliated with Pride House in the Olympic Village. In the past, the South Korean LGBTIQ sporting community has found it difficult to generate awareness and support. South Korean LGBTIQ activists were also unable to raise sufficient funds for a stand-alone Pride House, but thanks to the help of the Canadian Olympic Committee, however, the Pride House was still able to be included within the games.

Candy Yun, a Korean LGBTIQ activist, responded to the current state of the LGBTIQ sports community and the process of organizing the Olympic Pride House, saying:

There is hope, however, that the Pride House and accepting spirit of the Olympic Village will be a positive influence towards change.

Candy reflects on this and the future influence these winter games hold:

“Thanks to the Pride House, people come to notice the existence of LGBTIQ in the Olympics. And we hope that at least the athletes got to know that they will get enough support in the every step of the way of living as LGBTIQ athlete and of making any kind of decision as LGBTIQ.”

It’s certainly a step in the right direction for LGBTIQ athletes and a contribution towards acceptance and support.