Pride month is upon us!

Although Pride events happen year-round across the world, June has, symbolically, been marked as Pride Month to commemorate the Stonewall riots of 1969, which are credited with inciting the Pride marches demanding recognition of the rights of LGBTIQ people to be exactly who we are. Today Prides take different shapes and forms. But what they all have in common is a purpose: fighting for the equality of LGBTIQ people everywhere.

Since 2020 OutRight Action International has marked Pride with a Purpose™ throughout June as a commemoration of the history of Pride and the progress to date, and a reminder of the challenges ahead for LGBTIQ equality. This year in particular, those challenges center around the implications of the COVID-19 pandemic, which continues to have disproportionate effects on LGBTIQ communities. As such, as part of the Pride with a Purpose™ campaign we are raising funds for OutRight's COVID-19 Emergency Fund.

We are excited to be partnering with a number of corporate partners on their Pride initiatives, including many who have supported the Emergency Fund. In particular, OutRight, for a second consecutive year, will be one of the beneficiaries of P&G and iHeartRadio's “Can’t Cancel Pride” which airs on June 4 at 9 p.m. ET.

Read more below about how you can mark Pride with a Purpose™ with us! 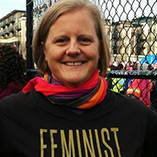 Katie works with our Development team as Director of Leadership Giving, responsible for engaging with OutRight’s major donors across the globe. Katie came up with the Pride with a Purpose™ campaign idea last year because she wanted to raise awareness and support for the global LGBTIQ community during the COVID-19 pandemic.

Originally from San Francisco, Katie came out while at university in North Carolina and has spent the last 20 years in Seattle, where she lives with her wife, three children, and a puppy named Ollie. Outside of work, Katie enjoys annual bike camping trips with her family and cheering on her local women’s soccer and basketball teams.

The term “Pride” came as an antidote to the shaming LGBTIQ people were (and continue to be) subjected to by their families, society, the police, authorities, and many others.

It embodies accepting and loving yourself as you are, rejecting the shame imposed on you, and feeling empowered to be authentically you.

ENGAGE: Support our work for the LGBTIQ community everywhere. Rally up your friends for #PrideWithAPurpose.