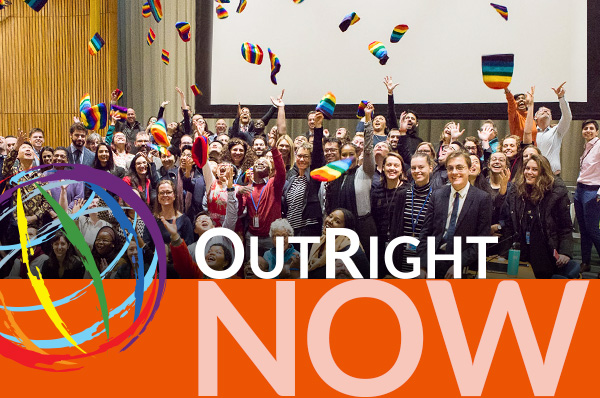 We have just completed our seventh annual Advocacy Week in New York with 50 activists from 36 countries.

During an intense week and a half, we covered a lot:

But first and foremost Advocacy Week is about meeting state representatives - this year from over 40 states. We know we are up against a lot of opposition to the rights of LGBTIQ people in so many places around the world. And governments need to hear the concerns of the LGBTIQ communities. For many diplomats this might be the only time of year that they meet with LGBTIQ activists from their own region!

At the end of Advocacy Week we held our annual OutSummit - hosted at CUNY School of Law and in partnership with the Sorensen Center for International Peace and Justice.

The workshops covered diverse topics like faith, business, media, the United Nations, progress through the courts and LBTI Invisibility – with speakers engaging the audience in discussions.

We ended the conference on a high note, discussing the impact of the historical decision from the Supreme Court of India in September, striking down the colonial-era ban on same-sex relations. Our speakers from Singapore, Sri Lanka and Kenya gave their perspectives on what the decision will mean in their countries.

Plenary participants (left to right) Allison Jernow, Remy Choo, Subha Wijesiriwardena and Njeri Gateru from the “Global Impacts of the Repeal of Article 377 in India.” ~ All photos by Brad Hamilton Photography.

Every year, OutSummit further fortifies my belief in a truly global LGBTIQ movement, one that is resilient, powerful, and courageous. We need to stand together and show up for each other as we all push forward and mobilize for a more equal and just world for LGBTIQ people everywhere.

Click here to see more photos and highlights from OutSummit!

P.S. Thank you to Jesse Tyler Ferguson's foundation Tie The Knot for their support of OutRight!