The pandemic continues to affect how we live, work and travel, impacting those most marginalized in societies, such as LGBTIQ people, more than many others. OutRight is determined to continue building alliances and connections between activists and allies to promote human rights for LGBTIQ people everywhere.

For the seventh year in a row we are gearing up to host OutSummit, our annual global convening for LGBTIQ equality. For the second time it will be held virtually, enabling diverse stakeholders from our movement across the world to participate. Sessions will take place from December 8 to 10, 2021, and be catered to include participants across different time zones.

I’m excited to announce that our first keynote speaker this year will be Gigi Chao (she/her), a prominent and publicly outspoken advocate for LGBTIQ rights in Asia. Gigi is co-founder of Hong Kong Marriage Equality, and founder of Faith in Love Foundation. I’m thrilled that she will be sharing her story with us!

The OutSummit theme this year centers on a basic demand - human rights for LGBTIQ people everywhere! Sessions will cover topics ranging from eliminating harmful sexual orientation and gender identity change practices, to engaging the corporate sector to advance LGBTIQ inclusion, and from ensuring authentic and accurate LGBTIQ representation in the media, to countering backlash around the world.

Registration for OutSummit 2021 is open and we invite you to register today!

The Board of Directors, global staff at OutRight, and I look forward to welcoming you there!Maria Sjödin
they/them
Acting Executive Director
OutRight Action International 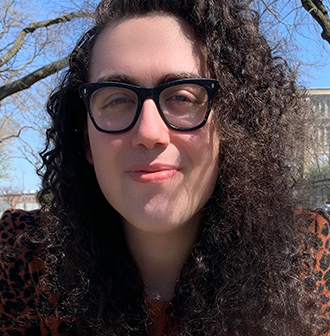 Meg (she/her) is the Executive Assistant based in New York. Meg supports the Acting Executive Director, and plays a key role in organizing OutSummit, OutRight’s annual global convening for LGBTIQ equality. Meg is passionate about queer and trans advocacy, gender equality and mental health. Outside of work Meg is a keen scriptwriter, and ardent fan (and sometimes participant) of stand up comedy and drag performance.

September 23 was the annual Celebrate Bisexuality Day. The term bisexual refers to someone who is sexually and/or emotionally attracted to two or more genders. It is also increasingly used to describe sexual and/or emotional attraction to people regardless of their sex or gender identity.